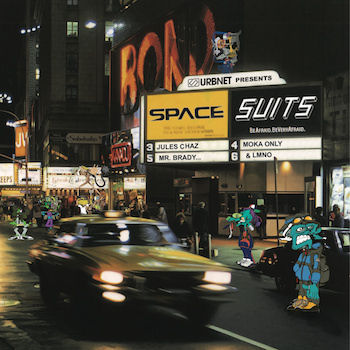 It’s an interesting coincidence that as I clean out my catalogue of unreviewed albums from fall 2014 and prepare for calendar year to roll over, I should come across two albums from the same label with space travel motifs. It’s fitting for rappers to use travel through the galaxy as a metaphor for escaping the gravity of daily reality – one which was hammered into us on a daily basis this year. Rakim once urged us to “travel at magnificent speeds around the universe” but we as human beings can’t even escape from racism, poverty, war and disease – let alone slip the surly bounds of Earth to touch the face of God.

Science-fiction is at times wrongly described as leaving our petty modern day problems behind, but widely acknowledged classics of the genre tackle said problems head on. Humanity’s problems are writ large against a starry backdrop – the threat of Romulan invasion in the original Star Trek an easily read allegory for the fear of communism in the 1960’s and the “domino effect” of nations collapsing to this alleged evil. The collaboration of LMNO, Mr. Brady, Moka Only and producer Juels Chaz seems firmly rooted in this reality. “Spacesuits” is not an escape at all – it’s an often purposefully discordant note of disharmony.

The talents of all the individual members involved keep the project interesting, but it’s not necessarily an easy listen despite clocking in at just over a half hour. The short tracks (only one is over three minutes) range from hypnotizing to off-putting. “Nibiru” is one of the more beautiful moments despite the apocalyptic cataclysmic event it references by name, while “Chase” is a collection of words just barely held together by a beat. At times it reminds one of the madcap experiments created by Madlib and MF DOOM, but without the latter’s magnetic personality. Even though there are three different emcees involved, your enjoyment may hinge almost entirely on your opinion of LMNO, the most polarizing of the three figures here.

Songs like “Rockabye” epitomize arthouse rap, meant to be interesting to people who like to be challenged by their music, where a headnod vibe seems to be secondary to raps like “Mork and Mindy/pork and effendi/space cakes – import ’em by the plenty.” It doesn’t go to the absurd lengths often found on a sex and scatalogy obsessed Kool Keith project, but it’s hard to get down with songs like “Navigation” that are more interested in reversing samples than producing listenable beats for the emcees to flow on. Dope lines like “I won’t let a Moon Man tell me how nice I am” get lost in the mix as a result, as well as the direct allusions to A Tribe Called Quest. Nothing on “Spacesuits” is outrageously bad, but it’s too clever for it’s own good, and it’s just not that fun to listen to.