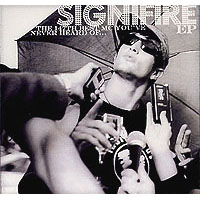 It’s presumptuous enough to call yourself the best of anything, but in my books, if you’re calling yourself “the 147th best MC you’ve ever heard of,” you better live up to it. With the release of his latest EP “The 147th Best MC You’ve Never Heard Of,” Virginia emcee Signifire attempts to authenticate the reasons for the best of the best emcee.

Early on in 2001, Signifire collaborated with Vex-Bliss, Amens, and DJ Sseleman to form the group Indigenous Wombs who has opened for hip hop icons such as The Roots, Little Brother, Mr. Lif, and Akrobatik. As the spotlight soon faded for Indigenous Womb, Signifire carried on with his own endeavors as a solo artist releasing his first solo album “The Yellow Lens” in 2004. With a new outlook on his artistry, Signifire has taken on an innovative perspective by joining the Inklings Massive, a collective of rappers and producers from N.Y., N.J., Baltimore, and D.C, as well as establishing inventiveness in his second project “The 147th Best MC You’ve Never Heard Of.”

Signifire’s “The 147th Best MC You’ve Ever Heard Of” begins with “Reintroducing” that features a soul infused beat and bass guitar. The track publicizes and familiarizes Signifire’s audience with his rapping skills and how he has changed through the years as he shows that “â€¦I’ve been doing this for a second now, went from abstract to attempts to get a message out.” Reinforcing why he is the best emcee, Signifire publicizes his strengths while challenging other emcees to surpass the amount of skill he potentially possesses.

Featuring an appealing style of lyricism in “She’s Beautiful,” Signifire manipulates his rhymes with the repetition of sounds in his lyricism and adds a somewhat amusing variation to the EP with his humorous antics. The track reminisces about a girl who he can’t have, but wishes he did.

“Not Your Gentlemen” is yet another perfect example of the rather comical style from Signifire and features Jackie Gino on guitar. Beginning with a voicemail to his girl about a text message she received from another guy, Signifire lashes out to all the men trying to holler at his women. This playful sounding track composed of horns and fast bass line is entertaining and a pleasant change to seriousness of the EP.

With a soul permeated beat and vocals from Kalen Lister; “Come to Pass” is a poignant track that exposes the reality of connections and unions that eventually fade as time progresses as shown in the chorus:

“Something About Us” is a similar track that reveals the love that holds relationships together and the strength as time passes. Featuring Vex-Blizzy and Soul, the easygoing, slow rhythm in the track blends well with the featured vocals.

With an upbeat funk rhythm and guitar twang, “It’s All Lies” unveils the powerlessness of being truthful. In this crude track about lies, the break towards the end that features both drums in the background along with Signifire’s lyricism adds a nice touch of variation to the track.

As an artist, Signifire has presented us with variation, comicalness, and truth, but has fallen short in the depth of lyricism and production in “The 147th Best MC You’ve Never Heard Of.” Although excelling in a couple tracks with his quick verses and catch phrases, the monotony in production is in need of a multiplicity of sounds to bring variation to the EP. However, in the areas that Signifire lacks, he makes up for it in other ways and ends up with a finished product that keeps the audience entertained. Although Signifire will have to work on becoming the “best MC you’ve ever heard of,” with some time and effort it’s a possibility that can soon become reality.