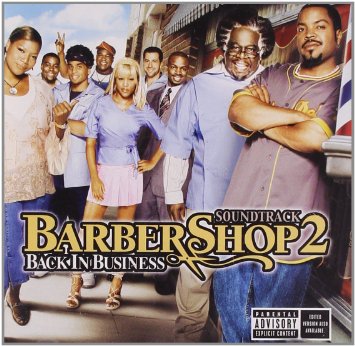 Various Artists :: BarberShop 2 – Back in Business

Last time around, the “BarberShop” soundtrack was a little lean on hip-hop. While it did feature the top ten Fabolous hit “Trade it All Pt. 2” and a song by Ghostface, it largely revolved around R&B. From the old school soul of Marvin Gaye and the Staples Singers to the new jack swing of 3LW and Ginuwine, it was pretty clear what kind of music was playing at the barbershop.

This time though, the barbershop seems to be getting in touch with it’s gully side. The lead-in on the album is fairly gentle. Mary J. Blige and Eve perform “Not Today” over a punchy beat driven by Dr. Dre, and Southern soul singer Sleepy Brown croons on “I Can’t Wait” while Andre 3000 and Big Boi finally get around to rapping on the same song for a change. The Zone 4 Remix of “Fallen” by Mya is more in the vein of the opener – a fairly hard hip-hop beat matched by a sugary singer, with Chingy providing the guest rap on this one. It’s all leading up to a new track by The Clipse called “Pussy,” but if you assumed it would be a raunchy sex anthem, check the lyrics:

“All I wanted growin up was remote controls
Now my whole life remote control, hit the block dope control
Got ghetto corners chokin slow
Grandmama go to church trying to soak my soul, oh!
This one’s for my foes
Find yourself, in a hopeless hole trying to go against him!
I puppet you Pinocchios, flows on strings
It – is what it seems, just call me Giupetto!
A young stock market, put money in your pocket
Cause when Pusha talk it it’s the object then I drop it
I rose gold ya, huh? pink diamond ya, hah?
Set it in a rhyme now the industry got pink eye
Contagious, flows high demand
Like the new Lou’ Vuitton monogram
Pastels is cute; how you niggaz follow suits so well?
These barrels encompass the heat from hell”

Things dip back into the old school R&B for a minute, as Keyshia Cole flows to a beat New Edition could appreciate on “Never” while Eve pops up again for another guest appearance. The quotient of vocals sung as opposed to rapped is high thus far in, but every song has at least featured a rap star. On the G-Unit track “Unconditionally” though the chorus is the only hint of softness. It’s a Megahertz track with a Bob James sample, so it’s hard and smooth all at the same time – not unlike 50 Cent himself:

The biggest surprise on the album though might be Olivia’s song “All.” True it’s an R&B song with no guest MC’s at all, but she’s singing over the Lil Jon beat from “Damn!” by the Youngbloodz. As totally incompatible as this sounds at face value, Jon has tweaked the beat enough here to make it’s high-pitched shrieks and booming bass fit Olivia better than Dan Marino does Isotoner gloves. And if you like your dancehall music with a little bit of soul glow, the track that follows it is a guaranteed crowd pleaser – “Things Come and Go” by Mya featuring Sean Paul.

Hip-Hop comes back into full effect on “Wanna B Where U R” by Floetry and Mos Def. If the samples sound familiar, you’re either an old school fan of the Average White Band, or you’ll know the phrase “Grand Verbalizer, what time is it?” Hip-Hop could really use a dose of Brother J and Professor X these days, but I digress – it’s still good to hear Mos Def spitting on this beat. Things get even harder on the title track “BarberShop” featuring the long absent D-12. They appear sans Eminem here, but thanks to Denaun Porter’s swinging track and the raps of the other membership, it’s still effective. Give props also to his former Brigade partner Kuniva for a “Family Guy” insert, when he says “on the black hand side, gimme some grease” and follows it with a Quagmire-esque “Allll-riiiiiight!” As usual though, the aptly named Bizarre steals the show:

“You heard of me, the fat guy that raps
Now it’s time for Bizarre to take off his shower cap
It’s been five days, I patiently waited
Saturday mornin, it’s time to get faded
And I mean get faded, ‘I mean get faded!’
Damn near four o’clock, I didn’t almost make it
My barber’s name is Sarah, she don’t really know how to cut
But she got some nice teeth and big ol’ butt (yeah!)
So two days a week, I get faded for no reason
Same ol’ haircut, keep it low and breathin
If you see me in a barbershop, go on and run
Cause I’m probably gettin’ a perm and my toe-nails done!”

The album continues to roll with the grimy Mobb Deep track “One of Ours,” with Havoc’s typically hard beat. After that Olivia returns to sing about her “Private Party,” followed up by new female rapper Morgan Smith detailing what she’ll do “On the Weekend” with 3LW. She’s not bad, but she comes across sounding like an Eve clone all the same. Spitfiya tries to live up to the name on “Make it Home” featuring Anthony Hamilton on the hook, who is obviously not “sick and tired” of his role as hip-hop’s new Nate Dogg. The album closes with the only track this reviewer can honestly not even feign interest in – the overly syrupy and pretentious “Your Precious Love” by Avant and Keke Wyatt. Other than that, “BarberShop 2” does a fine job of rewriting the formula from the first soundtrack with a healthy dose of hip-hop attitude. While far from perfection, it certainly bodes well for rap soundtracks in 2004.