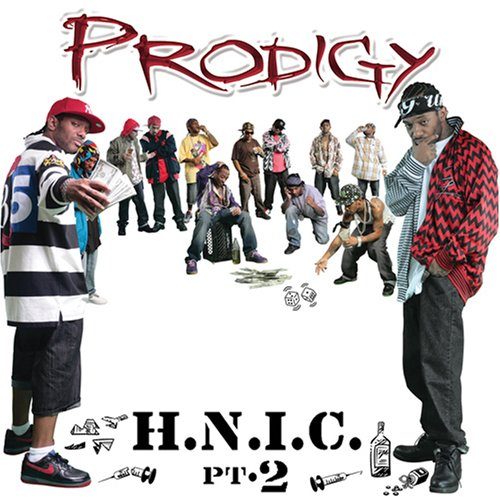 This is the second official solo offering from Prodigy, one half of the infamous Mobb Deep – released more or less 8 years after the first installment of “H.N.I.C.” – and contains thirteen excellent tracks, with production mainly handled by The Alchemist and Sid Roams… But none of that really matters right now.

You see, Prodigy is locked up. Jailed for the next few years, this is the last we will hear from P on wax for a while, so if you’re a fan (as so many of us are) then “H.N.I.C. Pt. 2” is going to have to hold you down during his bid. Stung by police on gun possession charges (someone please inform me of the percentage of rappers going down on similar charges right now) he is serving time. Part of me can’t understand what possesses millionaire rappers to flagrantly flaunt the law when they have got so much to lose… Part of me can’t judge because I have never walked a mile in Prodigy’s boots before… But the bigger part of me is filled with sadness that another talented music artist is locked up and unable to release the kind of music that hip hop heads have always loved.

Especially when, after the G-Unit fiasco (that album was terrible, let us not mince our words), Prodigy’s “Return of the Mac” mixtape primer for this official album was so promising. The Alchemist brought the heat and Prodigy kept it simple, doing what he does best – dirty gutter rap. That formula has been translated to “H.N.I.C. Pt. 2” – with the only differences being that Sid Roams shares production duties with The Alchemist over ten tracks (with Havoc and Apex covering the rest), and an expansion on the themes Prodigy raps about. This album is made infinitely more interesting by the varied subject matter, and the P rolls back the years.

On the opener “Real Power Is People” he gets militant, spitting politically charged and inspirational words to the streets – not just mindless bullshit, but real shit. The sampled skits incorporated into the tracks help to give the topic matter direction – in fact, they are superb finds and will help to expand young impressionable minds. Of course, he does return, on tracks such as “ABC,” to the guns and gutter bravado that has served him so well, but just about manages to stay on the right side of braggadocio (as opposed to plain nonsensical shit-talking). He even manages to make one of the most beautiful tracks either Mobb member has ever spit – the intensely personal “Veterans Memorial Pt. 2” could bring a tear to the eye of even the hardest thug. You almost feel uncomfortable listening, but it brings so much balance to the album that any guilt is short-lived (and a classic Alchemist beat helps too).

As for the music, be prepared for darkness. I was impressed for sure on my first few listens, but decided to go for a late-night drive bumping the album. Needless to say, it came alive and fed off the crackle of the city: it almost seemed that the streetlights would flicker and fizz as Prodigy rolled past. Sid Roams handles his share impressively, and in a subtle but intensely melodic way – you always have one key melody to take from any of his beats, even if it doesn’t reveal itself straight away. The Alchemist is, with the exception of “Veterans Memorial Pt. 2,” extremely solid rather than spectacular – but that is perhaps more fitting for the album, as it helps to make “H.N.I.C. Pt. 2” incredibly consistent.

In fact, my only criticism of the album is that perhaps it might be just a touch TOO consistent – there isn’t really a true banger on here to break it up or ignite it, not in the vain of what we’re used to, nothing that will set the late-night radio stations on fire in the way that “The Learning (Burn)” did, “Got It Twisted” or even (to a lesser extent) “Put ‘Em In Their Place.” Maybe that just reflects the state of play with Prodigy being in prison – perhaps it just wouldn’t feel right to have a massive anthem knowing that he couldn’t truly enjoy it for the next few years. And that is part of the attraction of this LP – the connection that was reset when Mobb Deep signed with G-Unit is back online in a big way with Prodigy’s second solo offering. The fans that know and love P or Havoc will immediately identify with “H.N.I.C. Pt. 2” and will enjoy listening to it, for sure. It is just a damn shame that the main protagonist isn’t around to enjoy the success it deserves.