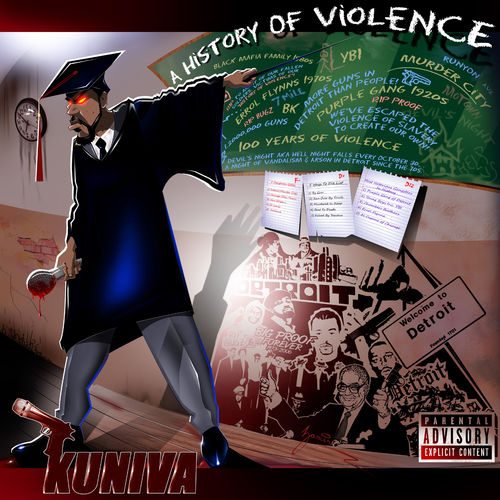 If you look at the nearly 20 year history of D12, Kuniva is the only member of the crew who has been there from inception to the present day. Bizarre and Eminem could share that status if they didn’t each take a hiatus for a couple of years before rejoining. Kon Artis/Mr. Porter produced the track “Bane” for D12 on the “Shady XV” compilation, but has stated his intentions multiple times to focus on his career as a soloist and producer – with no animosity toward the crew. It’s possible Bugz or Proof would have stayed down the entire time but due to their untimely deaths we will never know for sure. The only other member who has never left or taken time off is Swifty McVay, but he wasn’t there at the inception – he joined after Bugz died.

The point I’m trying to get across here is that for all intents and purposes Kuniva can be considered the elder statesman of the D12 crew. There have been short time members, part time members and even brand new members, but Kuniva has stayed down for D12 since day one – he’s like Eddie and Alex to Van Halen. The irony is that he’s not necessarily the first member you think of when you remember favorite verses or tracks. The aptly named Bizarre always pops to the forefront, Eminem usually has the funniest lines when he’s participating, and Kuniva is the guy whose granny wanted to know why he was rapping with a honky. It’s not that Kuniva was ever a bad rapper – he could turn in a solid verse – but in a crew of heavyweights his eight bars or so in a song was almost always overshadowed. It’s also a little bit his own fault though that in the last 20 years he’s only released one solo album/mixtape – “Retribution” in 2010. He doesn’t come across like he has to be the star – just the glue that holds the other stars together.

The half hour of “A History of Violence” is his chance to change that perception, but he’s already giving up a third of the album to guest stars. “Michiganish” finds him sharing the mic with Jon Connor, Boldy James and Guilty Simpson, “Where I’m From” features Pablo Skywalkin, and “Where the Hoes At” features fellow D12 member Swifty McVay plus Money Making Adee. It’s almost tragic that the album’s closer “Shout Out” is where he delivers some of his best bars and gets the full focus.

“Thank you to the fans for believing in your man
For those who plan to meet me here’s a greeting in advance
I come from a city where cops beat you out your pants
Where killers’ll blast you then relieve you of your bands
But see I’m what that city made, I still believe and hope for it
It’s bittersweet like a whack song with a dope chorus
I gave this game over 15 years of my life
So why do I still feel like I just started tonight?”

Kuniva attempts to coin the term “Derty Headz” and make it his anthemic song in the process. It’s an autobiographical tale of both his history and D12’s, proclaiming himself a “dirty head for life” who is “willing to pay the price.” As he notes the price that he paid was high though – members who are dead and gone, public beefs with Royce Da 5’9″ (that were ultimately squashed) and generally struggling to stay relevant when Em’s career often seemed to overshadow anything that they did.

“A History of Violence” is a reflection of Kuniva’s career in both intentional and unintentional ways. “I’m a different fabric yo, we ain’t cut from the same cloth” vows Kuniva on “Baileys In Bangkok,” but it’s not the kind of line that makes you go “OOOOH” or hit rewind. It’s like “yeah aight good metaphor, I’ve heard a few other people drop it, but you fit it in that verse well, so I respect you.” Kuniva plays the role he has always played – the emcee you respect who has good breath control, flow and vocal tone that never really says anything that makes you go crazy for his shit. There is absolutely nothing “bad” about “A History of Violence” and if you’re a fan of D12 or you’ve always liked Kuniva’s flow you should pick it up either way. There’s also nothing important about this 33 minutes either. It exists. It’s not world changing, nor does it alter the hip-hop landscape. It’s just there.