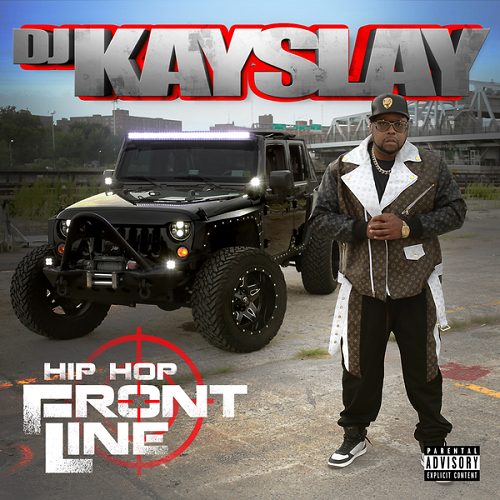 There’s nothing wrong with rappers rejecting the current trend or popular style, particularly when you can empathize with their concerns surrounding hip hop culture itself. The problem with DJ Kay Slay’s latest compendium is that it is bitter emcee after bitter emcee sharing their disdain for today’s music. The unfortunate irony is that there is no shortage of trash – if this is what’s on the frontline it wouldn’t last long at all.

Kay Slay, much like Khaled is today, was renowned for shouting all over his mixtapes, often ruining the songs he was trying to market. Thankfully, Kay Slay is rarely near the microphone on “Hip Hop Frontline” but his productions don’t fare much better. Clearly, the focus is on the emcees and there are some genuinely dope moments from the likes of Mysonne, Lexxy, and EMC Scotty. The big names, however, phone it in for the most part.

Lil Wayne and Busta Rhymes must have e-mailed their verses for “They Want My Blood” because there’s no way they’d want their names attached to this. Autotuned to within an inch of its life, it’s genuinely unlistenable. Cee-Lo Green cuts it close too, with a warbling hook on the track “Hip Hop Frontline” with some notes only audible to certain breeds of mice. Nails on the chalkboard stuff.

“Back to the Bars” feels like a Papoose track performed by various emcees, but is noteworthy for Locksmith, Mysonne, and Fred the Godson. They all provide something different with lines like “they just erased black face and replaced it with face tats” actually adding some context and theory to what’s happening to commercial hip hop.

Masta Ace delivered a tasteful update to “I Used to Love HER” last year with “Still Love H.E.R.”, and Ace is humble enough to acknowledge hip hop is very different in 2019. Mumble rap isn’t for his generation and at 32 years of age, it’s not something I tend to enjoy. Given this is RapReviews.com, the art of rap is important to our readers, but it’s tiresome hearing talented emcees dedicate their time to bullying rappers that never claim to be emcees. A lot of the artists involved here should know better, as it’s like they only listen to the radio and MTV when there’s an invention called the Internet showcasing hundreds of these so-called “real hip hop” artists.

The wish to save hip hop is nothing new. Jeru the Damaja was wrestling it from Puffy on 1996’s “One Day” but it was a concept that worked at a time where the sound was clearly splitting. Thirteen years after Nas declared “Hip Hop Is Dead” it appears a section of New York is still blaming the south for killing hip hop, despite contributing to its downfall with bloated, mediocre album after bloated, mediocre album. “Hip Hop Frontline” may have been enjoyable during the DJ Clue mixtape era of the late 90s because that’s exactly what these songs sound like. Forgettable, often random combinations of household names and underground emcees sparring with each other over some soulless instrumentals. I had to turn it off when Papoose called for the world to “bring back Tom from MySpace”. Like, come on…