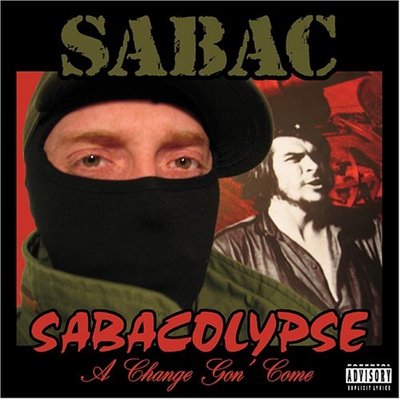 Going solo out of an underground rap group is always a dangerous proposition. If the group is well acclaimed, you can always hope that your solo will push as many units as the group you were in did. Then again, if you weren’t the best recognized member of the group to begin, heads might unfairly presume you were the “weak link” of the crew and write off your debut before it can even hit store shelves. And of course, even major label artists who are well acclaimed can have problems when they go solo. Which would you rather buy – solo records from Erick Sermon and Parrish Smith, or an EPMD album? That’s exactly the reason the two attempted a briefly interesting yet ultimately ill-fated reunion.

Regardless of the risks, Sabac Red of Non-Phixion has decided to roll the dice. Non-Phixion fans can rest assured Sabac has not left the group permanently. In fact, the press kit for “Sabacolypse – A Change Gon’ Come” goes out of it’s way to convince you that’s not the case. In several different paragraphs, the words “Sabac & Non-Phixion” go hand in hand. “Sabac and Non-Phixion have performed in…” and “Groups Sabac along with Non-Phixion have shared the stage with include…” pepper the press release. Wait a minute though – does Sabac have an identity outside of Non-Phixion, or doesn’t he?

Sabac’s solo album appears on Psycho+Logical Records. This would seem to break him away from the group somewhat, since their album was released on Uncle Howie Records. On the other hand Psycho+Logical Records is owned lock stock and barrel by Necro. Necro has produced a lot of tracks for Non-Phixion in the past, but it goes deeper than that – he’s Ill Bill’s brother, who is one third of the Non-Phixion trio. Ultimately whether there is really any seperation between Sabac and his group is up to the listener to figure out, but there’s plenty of good reasons to listen.

There is of course the aforementioned Necro for one, who didn’t just release this album on his label – he produced the entire joint. While he may debatably be the most disgusting sadist lyrically in all of hip-hop music, he’s also well known for producing some of the fattest head-nodding jams. Evidence of that musical talent is all over Sabac’s album. “Positive & Negative” pits Sabac as the force for good against Necro’s evils, but finds them sharing the same layered beat of strings, drums, bells and bass to ill effect. “Protest Music” reworks the famed Bob Marley track “Get Up, Stand Up” into an anthem for an armed hip-hop militia for self-defense. “Bac’s Anthem” is surprisingly bouncy and catchy, and all too short at under 90 seconds. “Fight Until the End” is a Non-Phixion styled epic of methodical bass and beautiful pianoes, broken by symphonic stabs and punctuated by a patois style hook. Like his NP comrades and the rapper Immortal Technique, Sabac shows a tendency towards distrust in the government and a ready willingness to believe conspiracy theories such as the one portrayed on “The Scientist (AIDS)”:

“AIDS! I’m preparing a technical experimental chemical
invented to infect your ventrical fluids collected in your testicles
blood stream and genitals, causing breathing in pain
Leaving your brain dead, heathen bleeding squeezing your veins
In these days I find power, you’ll never suspect the doings
of another prized scientist, to project and ruin
people’s lives with diseases that only infect humans
You can’t find it pure in animals, testing or transfusions
Man I can’t wait, this feeling is great
I can’t believe how much the government is willing to pay
I start killing the gays, latins, white and black trash
Then the young folk, and just hope there won’t be a backlash”

Whether you believe the human immunodeficiency virus evolved in nature or in a lab, Sabac’s first-person portrayal of an evil scientist bent on reducing human overpopulation by force is certainly thought provoking. Although a lot of songs kick these type of ballistics on “Sabacolypse” there are a few alternatives. “Urban Gorillas” brings other rappers into the mix to kick it with Sabac – underground icon Vinnie Paz most notable among them. “Vinyl” is a freestyle sans instrumental paying tribute to the continuing strength of wax in hip-hop. “I Have a Dream” is a surprisingly beautiful and uplifting track where Sabac sees a brighter day where “intelligent minds replace the nuclear weapons” and “the homeless will have homes and we can keep feeding the people.” Still there’s no denying the dark and brutally beautiful sound of cuts like “Speak Militant,” where Sabac rips an eerily DJ Premier-esque Necro beat with his concerns about the new world order:

“They got weapons of mass destruction, buttons explode the Earth
Disintegrating your flesh, you won’t even know it hurts
The worst are addictions, from nicotine to caffeine
The food supply injected with poison, affecting the spleen
Cream at all costs, murder by numbers, hurts hurting others
My circumfrence full of gunmen, a hundred miles and running
The coming of God, Satan’s upon us, waiting to balm us
Turn us to stardust, blow our ashes in the ocean
Hoping for peace, folks on their knees pray for forgiveness
Within this paranormal world that’s used to study mystics”

In the end “Sabacolypse” works out pretty well, as Red successfully divests himself from Non-Phixion yet simultaneously maintains the level of lyrical paranoia and well-produced beats that seperated them from other indie factions in the first place. Sabac himself is not quite the bright and bold personality that his kinsmen Goretex and Ill Bill are, and on occasion his voice sounds a little like a stiff wind could blow him over. Still there’s no denying he can rip the mic, and that his writtens while often very headdy and occasionally a little bugged are a lot more palatable than what producer Necro offers on his own albums. In fact the end result is that “Sabacolypse” is like listening to an album produced by Necro without much of the pornography and corpse fetishism that usually comes with it, and since Necro’s beats are the bomb even when he’s not that makes Sabac rapping over them a pretty damn good combination.