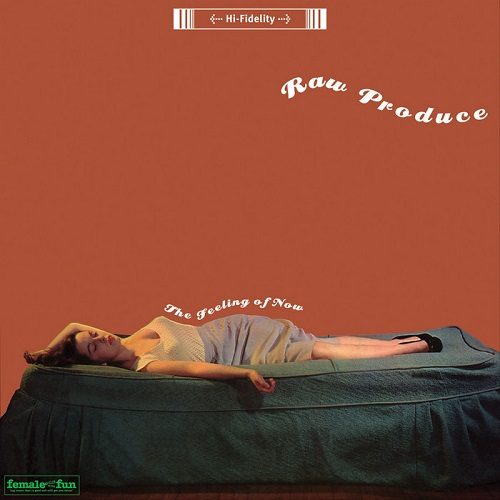 Raw Produce :: The Feeling of Now

“Poisons the Minds of the Children” by Cadence was a runner-up in the RapReviews.com Year 2003 in Review for the year’s 15 best albums. A noteworthy accomplishment to say the least, but certainly not the last that would be heard of Seth Boyd, the man behind the rhythmic name. Mr. Boyd was biding his time until the hip-hop world could be re-introduced to the group Raw Produce, a rap duo consisting of Boyd and talented underground artist/producer Damian ‘Pitch’ Roskill. Long before the likes of Akrobatik, 7L & Esoteric, and Mr. Lif blew up the Boston area scene, Pitch and Cadence were wrecking the underground with their “Selling Celery to Make a Salary” EP and getting spins on the legendary Stretch & Bobbito radio show. Years of fresh singles like “Cycles,” “Weight of the World” and “Mister Dope America” followed, but unfortunately illness and family crisis for both Cadence’s mother and Pitch’s father continued to delay their long-awaited full length LP. Give the two props though, family always comes first.

Now in 2004 it’s finally their time to shine again, and “The Feeling of Now” is the result. Rap’s original green grocers still have their sense of humor, but have used their years of dues to broaden and deepen their sound. They produced the entire album together, and while Cadence may be the better known lyricist of the two that doesn’t mean Pitch won’t shine too. What better way to showcase all of these elements than on the song “R-A-W”? Even though it draws the expected sample from Big Daddy Kane, even Rakim would have to praise it as being simple but yet quite clever. A scratchy old time piano loop from the low end of the eighty-eight keys forms both bass and melody, and blends perfectly with the writtens when the drums kick in:

“Rhymer Cadence is here, with some shit to make clear
I make styles vibrate the stylus so you get the idea
I’ll betcha I clear your misconceptions, your misdirected attempts
can find direction just by checkin every section
Cause my record’s a reflection of the skills that I like
I don’t got time to raise objection to you touchin the mic
But if you do, do me a favor..
Make sure that every jam you drop contains at least 7.99 worth of flavor
Cause I only got limited ends to spend on the wax
And I depend on the wax, so why would I want listen to you pretend on the wax?
Pretendin to act hard, bendin the facts
I got the message, now I’m sendin it back!
And when you get it, don’t sweat it or let it trouble you
Here I am.. R-A-W!”

Cadence is still as nimble with the verbals as ever, but don’t count out Mr. Roskill:

“Now I brought the I.Q., now here’s the idea
Sometimes it’s hard not to feel like a mad King Lear
Oh excuse me! Cause the Pitch is comin through
to leave you whack crews vocal tones lookin black and blue
Here’s a clue! Cause it’s so absurd
I caught the word, you should be seen and not heard!
You joined your band for the money or just to get laid
Raw Pro is an aphetamine, your shit is like a sleep aid!”

While their wit is definitely on hit, Produce is also not afraid to tackle serious subjects. On “Metastatis” Cadence raps with both eloquence and affection for his mother. For anyone who saw a family member suffer from cancer the words at the end of this rap culled from the song will hit home hard:

“She was thirty-three when she had me, glad to be facin the challenge
I suppose thinkin when she grows old, she can be proud of me
But that’s not how it came to be, strange to see how reality’s
clouds can be thicker than brick walls, but now I see
She raised me alone, but home wasn’t broken, through unspoken doubt
she found how to keep us out of the token single parent lifestyle
Condemned is blasphemy, far from catastrophe
’til latch-key’s responsibility was hatched in me
It had to be, to choose a family, I was glad to be half of it
Too many long for love, livin with never havin it
So I was lucky from the get-go
And yet though she had taught me a lot, still I wasn’t ready to let go”

It gets much deeper than that, and if you’re not personally moved by the end of the song then you’ve got a cold black heart and an empty soul. “The Feeling of Now” is not just an abstract title for this album pulled out of nothingness, it’s an indication that each song is meant to be a reflection of the feelings Pitch and Cadence had in the now of the moment they recorded the track. Those emotions range from underground hip-hop exuberance on the title cut, to the thought-provoking “Decomposure” enhanced by it’s long instrumental opening and heated up by the symphonic samples throughout, to the somber and bluesy “Grey Skies,” to the hip-hop masterpiece “Cycles.” While this track was released as a single years ago, the simple elegance of the beat and appropriately apt Q-Tip sample still stand the test of time, as do these words from Cadence:

“And so I seize the opportunity, cause unity is you and me
Subjective scrutiny instead of mutiny
In many communities there isn’t even a captain
So if you stormed the bridge, I wonder what would happen?
The need is for leadership, the ship is for leaders to lead
The river delivers the ship if the rudder can cut through the weeds
And otherwise we’re gonna run aground
Better that than we capsize, lies give us the run-around”

To the outsider looking in, it may seem as though Cadence is the lyrical dominance of the album. While the group has obscured giving individual credit to either member for lyrics or beats on purpose, it is true that their reps individually have been that Pitch is a producer extrordinaire who can bend and blend with the best, while Big C flows to them better than all the rest. Together they’re like New England’s own Organized Konfusion, except that they might sound and look a little more like John Cena than Junkyard Dog. Ten years ago when they first got started that might have been a stumbling block to their success, but years of hard work and the accolades acquired by other underground rappers with similar backgrounds have made such concerns irrelevant. Clearly their guests could care less. Akrobatik shows up to bless “Rick Cerone” and goes toe to toe with Cadence for the best punchlines, and reminds home listeners that simple definitions like “commercial because it’s on MTV, or underground just cause it’s on MP3” are getting played. Mr. Lif blazes the spot with his laconic rap style on the spacey and spartan “I Am Myself,” and you can find Esoteric on the aptly named “Perpetual Motion.”

Still when you boil it down to the essence, the guests don’t change the impact of “The Feeling of Now” as Raw Produce’s statement in hip-hop. The statement is rather simple, but simultaneously quite profound – the best rap music always comes from the true expression of your feelings. If you have to perpetrate and act hard when you’re not, or do a tearful emotional song to woo women when you’re a thugged out misogynist, it’s just plain whack. Right or wrong, always be yourself. Fortunately for the listeners, by being themselves Pitch and Cadence live up to their Raw Produce name and deliver some of the freshest goods you’re likely to hear this year.