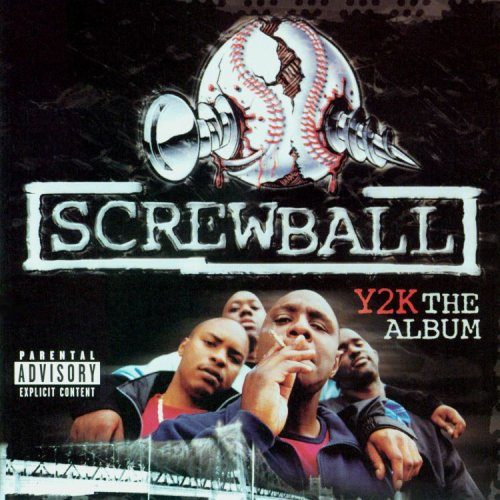 In the wake of major label promotion and radio-targeted intentions, hip-hop’s grimier offerings tend to collect dust on record shelves while more accessible releases constantly move units. Arguably one of the best hardcore hip-hop albums to see release in the new millenium, Screwball (made up of Poet, KL, Hostyle, and Kyron) delivered their debut Y2K in early 2000, to little press or commercial attention. The album falls into the before-mentioned category of forgotten long-players, a fact that is rather tragic considering the power and punch packed within this debut disc from the deadly serious MCs hailing from the stomping grounds of New York’s Queensbridge projects.

Released in 2000, right before the emergence of rap’s shiny suits and gimmicks galore, Y2K consistently damages eardrums throughout its 20 tracks. Armed with over 10 years of service within New York City’s underground scene, the members of Screwball had already carved an infamous reputation, individual projects inevitably led to the four MCs forming Voltron-style and adopting the name Screwball after a deceased friend. A deal with Tommy Boy Records meant larger exposure for the group, a fact they were obviously aware of, because Y2K is an extremely focused and hungry rap album. Lyrically, all four members command their respective microphones with the ferocity of artists like M.O.P., while the production line-up of beat-makers such as DJ Premier, Pete Rock and Marley Marl damn near guarantees audio fire.

The musical assault kicks off with “That Shit,” a pounding marriage of fierce bass and sporadic horns courtesy of Mike Heron, serving as a perfect warm-up for an album with no shortage of straight bangers. Before your neck can recuperate from the head-nodding sparked by ‘That Shit”, “F.A.Y.B.A.N.” smacks you in the face courtesy of a vintage DJ Premier creation, complete with his trademark scratches and signature boom-bap. Poet rides this track alone, and shows why he is the group’s most threatening lyricist. Audio taunts have been delivered many times, but are any as chilling and convincing as:

“Straight up and down I’m here to knock you out the box
Word to my pops, sell records like I sold rocks
Y’all bitch ass niggas I’ll meet you at the top
Don’t try to give me no love ‘cuz my shits blazin hot
Smack you with the mack, give you a speed knot
It be in The Source next issue, sayin why I dissed you
Punk motherfuckers, y’all dont want the ruckus
So called tough guys, I despise ya lies
I see it in ya eyes, you pussy and you frontin
Niggas smack ya moms you won’t even do nothing”

The other members of Screwball also shine throughout the album. KL’s razor-sharp delivery steals the show on the avant-garde and futuristic “Y2K”, and Hostyle confidently rides Mike Heron’s old-school nostalgia-inducing vibe on “H-O-S-T-Y-L-E”, lightening up his solo track a bit and providing the hook with an enjoyable level of listener participation.

Kyron’s solo joint “Who Shot Rudy?”, however, proves to be the album’s crown jewel, a daring and vivid fantasy scenario involving the assassination of the much-despised former mayor of New York City, Rudy Guiliani. Y2K was released two years before the city hailed Guiliani as its 9/11 savior, a time when the urban denizens of New York constantly attacked Guiliani’s character and actions. The cinematic backdrop from Mike Heron allows Kyron to dramatically serve his vision of what would happen if this pent-up anger finally acted itself out. Read for yourself and see how Kyron’s masterful storytelling abilities turn this into one of the more powerful songs hip-hop has ever heard:

“I had to see if it was true
Secret service was mad nervous, so was the boys in blue
Scatterin, like rats and ants, with the lights on
Man hunt the suspect all night long
Interrupted episodes, every channel show
Barracaded the city and blocked every road
Jakes in riot gear, blacks smilin it is
Reporters cryin out in the street, “It ain’t Rudy!”
He ain’t dead off, somebody blew his head off and skated out
Commissioner live on Channel 5 when they announced his death
Wifey was stressed, she was right there
She stated: ‘It was like a nightmare’
One-time, was combing the streets, had the whole force on the beat
Flyin in cars and on feet
The D’s came through stompin
Ghetto birds had the projects lookin like Compton with marksmen
With dirty thirties out the window
I’m in my room smokin boom, playin Nintendo, high off the indo”

Screwball’s reputation throughout their Queensbridge projects obviously preceded them, as nearly all of QB’s top soldiers contribute memorable appearances on Y2K. Nature delivers one of his better verses on the urban dedication “The Blocks”, while Prodigy tag teams with Poet to battle the harsh realities of project life on the emotional “The H.E.A.T. Is On.” Capone sounds right at home with the Screwball boys on the 70s-blaxploitation inspired soundtrack of “Take It There”, while the previously hard-to-find mixtape classic “On The Real’ closes off the album perfectly, with Marley Marl’s dirty and plodding piano samples inducing fiery verses from Poet, KL and guests Havoc and Cormega.

What may be the most welcome guest appearance is that of legendary Queensbridge advocate MC Shan. The title taken from a famous line heard on Shan’s classic QB anthem “The Bridge”, “You Love To Hear The Story” combines awe-inspiring Pete Rock production with honest declarations of their home’s musical history. This track successfully shows how Screwball’s members were a refreshing blend of old-school appreciation and new-school purity.

Y2K is a must listen for anyone not in the know, an album specifically catering to those who like their music rough and rugged. “Urban Warfare”, Hostyle’s auto-biographical account depicting the moment when he took a bullet in the eye, plays out like a news broadcast your local television provider is too afraid to show you, and the blunt death threats heard on “Attention: A&R Department” make it painfully clear that Screwball waived a collective middle finger at the music industry’s standards and practices. This “I don’t give a fuck” attitude is probably what prevented the group from achieving the level of acclaim and recognition they so rightfully deserved with this album.

While no one member of Screwball will be included amongst rap’s top MCs, each has enough energy and personality to be effective. Followed by the enjoyable yet inferior sophomore effort Loyalty in 2001, Screwball’s Y2K is the group’s permanent tag on rap’s hardcore “wall of fame’, and you’d be hard-pressed to find an album with as much grime and rugged-appeal released after 2000. This album sounds just as raw now as it did when it was released, and definitely puts 2004-hardcore rap to shame. Consider it a “slept-on” classic for street corner heads and anti-conformists everywhere.