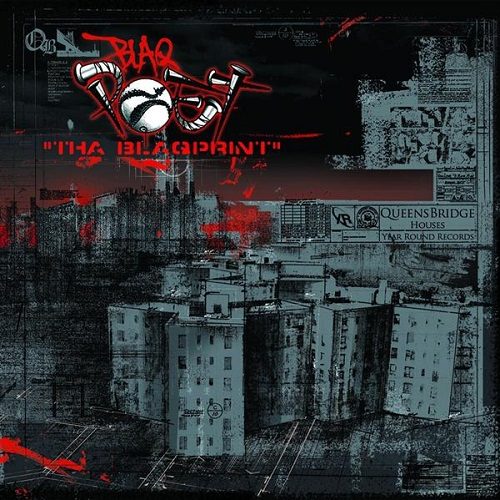 Blaq Poet is an above average and never great MC. I reviewed Finale’s debut a few months ago and noted: “Finale slows down, speeds up, and stresses things appropriately, a sign of a good performer. And, throughout, this is his greatest asset – he manipulates his voice, generates moods, and rides each beat quite well, with good versatility…” In other words, if you’re a rapper, there’s more than one way to make a track work. Blaq Poet (the slighter of the two) and Finale are not ‘memorable,’ in the sense of great lines or spectacular performances, but their flows are solid, confident, and at times nuanced. But, where Finale is performative, Poet is dramatic, and given Poet’s darker content, it’s effective. Of course, this does not excuse the mediocre lyricism, merely obviates it from carrying the full weight of the artistry. And, if, like Blaq Poet, you have DJ Premier on your album, it’s probably not really about you anyway!

I don’t say this based off of the sampler – at 16 tracks, it has no full songs – but have heard a few tracks prior to reviewing it. On “Ain’t Nuttin’ Changed” (which is given slightly more than a minute here), available on YouTube, in typical Premo minimalism, violins, strings, and drums are combined well enough to avoid dullness and offer a classic mid-90s feel. Blaq Poet’s voice comes on in slight incongruity – it’s rough, where the production is smooth. It works because neither dominates the other and the result feels like a real whole. But, good lyrics would have made it better, since mid-decade conventions call for wit, depth, and so on, beyond technical strengths.

As for the sampler “I-Gititin” has a start-stop feel, with Blaq Poet aligning his flow to the rough, nostalgic production. Again, that’s a skill, even if lyricism wanes. Still, even if it ‘fits,’ even if Poet is giving his all, “What’s The Deal?” has DJ Premier at his worst – nothing more than a simple piano loop, duller than Nas’s “Represent,” one of the weakest tracks on Illmatic. “Hood Crazy” is dramatic, but dull, and too loud for Blaq’s style, while “Voices” is full of platitudes – 2Pac ‘speaks’ to the rapper, lamenting the state of hip-hop. It’s always overdone and irrelevant.

“Sicnuwayshunz” is introspective, and because it’s unsentimental, it works. The production features a ‘memory’ loop re: the piano, completely understated for Blaq’s slightly subdued, but still abrasive, flow. “S.O.S.” has some interesting production for a Premier track, a ‘detective’ feel via bass, jerky instruments, and ‘telephoned’ vocals. Unlike most of the stuff here, it’s not a mid-90s construct – versatility. The same feel, ideas, etc., apply to “Don’t Give a Fuccc,” but, given the relentless noise, is less successful.

Most things work consistently. Blaq Poet, an above average rapper with a good flow, offers performances quite in line with DJ Premier’s work – in fact, Blaq Poet is somewhere in the background, and is here for the grit. If not depth, Poet accentuates the mood, especially evident on the final hidden track – where it’s not memorable in the conventional way, the performances work, on an objective and emotional level.