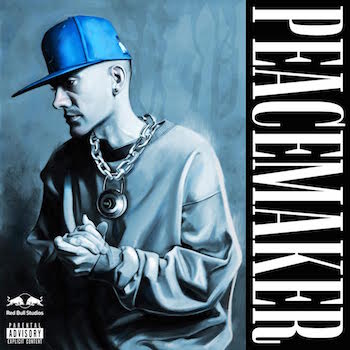 Paul Salva has spent time in Chicago, Miami, San Francisco, Portland, and Milwaukee, and currently calls Los Angeles his home. His early material was glitchy instrumental hip-hop in the vein of Shlohmo, but he has expanded his sound since then. He caught my attention with 2013’s “Odd Furniture” EP, which combined dance music and hard hip-hop beats. “Peacemaker” continues in the same vein as “Odd Furniture,” this time with a who’s-who of hip-hop rapping over the beats.

Salva has said in interviews that he moved to LA in part to get into making pop songs, and there is a definite pop polish to his work on “Peacemaker.” I don’t mean that it sounds watered-down or weak, just a little more put together than your average street rap beat. Salva has also mentioned that Rhye’s Robin Hannibal is a mentor of his. Rhye make very precise,minimalist yet warm indie R&B. That same precision and warmth come through in Salva’s music. In short, this is hip-hop made by someone who is interested in pushing the boundaries of the music and bringing more people and sounds into it. The term “hipster” might be an appropriate label were it not pejorative. I’m not sure how else to label Salva’s mix of indie, street, and mainstream music. Let’s just stick with “banging” and “good.”

The album starts off with the funk track “Freakin’ U,” which is on a straight up Dam Funk tip. Salva used to run a label that specialized in that kind of music, so it’s no surprise that it turns up on “Peacemaker.” There’s no irony or winking going on, though. One of the strengths of “Peacemaker” is that no matter what style Salva is working in, he commits fully.

The beats alternate between updates on the Southern street rap sound to fresh takes on G-funk, twenty-three years after “The Chronic.” On one end you have the ice-cold synths and snares on Freddie Gibbs’ “Old English,” on the other hand you have Problem’s “Moves 2 Make,” which sounds like 92-era Ice Cube. The centerpiece of the album is “Drop That B#%@!,” featuring Schoolboy Q, Kurupt, Problem, and Bad Lucc. The beat references “Boyz-in-the-Hood” along with the pneumatic sounds of hydraulics, while the four MCs go hard:

As you can tell from Schoolboy Q’s verse, lyrically this album is all about getting laid, gangbanging, drug dealing, getting high and driving nice cars. It is all well executed if ratchet as hell. The rappers add a layer of grime that keeps Salva’s beats grounded, and makes this feel like an album for the fans rather than for the music snobs.

I’ve been revisiting Zomby’s 2013 double album “With Love” recently, and I see a connection between Zomby and Salva’s work. While Zomby is more EDM-oriented, both artists similar in that they take a nuanced, thoughtful approach to standard hip-hop beats, and especially trap beats. It’s nice to see producers approaching street rap with such artistry. “Peacemaker” puts Salva firmly on the map as a producer to look out for.