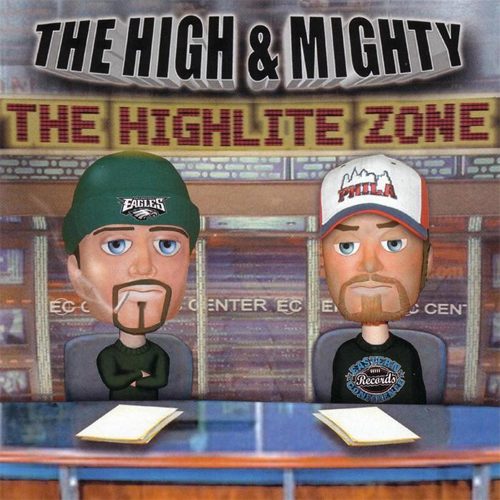 The High & Mighty :: The Highlite Zone

With “Home Field Advantage”, The High & Mighty were among the few to actually release a full-length on the much talked about Rawkus Records, but in the four years that have passed since their debut, Mr. Eon and DJ Mighty Mi have built their own respected record label with Eastern Conference, which today is home to heavy spitters such as Cage, Copywrite and Tame One. After three “Eastern Conference Records All Stars” compilations and last year’s “Air Force 1” EP, the duo finally drops its second album, “The Highlite Zone”.

“And in case you forgot,” the opening “Bobblehead Night” reminds you of the Philly crew’s origins and accomplishments, with Mi scratching in excerpts from their back catalogue over a funky track that virtually swerves its way down your earhole. And once Eon’s trademark imploring voice joins his DJ, fans will rejoice in the fact that this dynamic duo hasn’t flipped its formula. The High & Mighty are once again in that zone, which they fittingly call “The Highlite Zone”. So the shock is considerable when the second track, Sebb’s experimental “Right Here” cuts through the haze with sharp guitar riffs. Yet once you’ve adjusted, the tumbling track seems fairly representative of the rock ‘n roll ruckus this outfit is known to cause. Sebb quickly caters to more traditional tastes with a beautifully chaotic conglomerate of dramatic strings, funky guitar twangs and horn blasts merging loudly into “Cheese Factory”, an inviting “let’s get ready to rumble” for Eon and Copywrite to trade lines over, aiming at the kind of fabricated rapper that can be figured out all too easily: “You ain’t real, you’re what your label wants you to be.”

But if you think Eon only goes up against name- and faceless opponents, listen to “Take it Off” and think again. After getting official validation from a local Mitchell & Ness sales manager for being the “first rap group to wear throwback jerseys,” the verified sports fanatics construct a little ‘throwback’ theme themselves. The hard-pounding beat is jacked from Cool C’s “Juice Crew Dis”, while the hooks executed by Vast Aire reference De La Soul’s “Take it Off” and PRT’s “Shakiyla (JRH)”. To what end, you ask? To diss rappers who rock sports apparel for the trend of it. It may have something to do with his hit single “Air Force Ones” that Nelly is at the center of Eon’s attention:

“Good gracious, Nelly’s so tasteless
playin’ himself trippin’ over shoelaces
Air Force 1 was my shit and I’m petro
can’t let go, you so pseudo-retro
[…]
You right thurr, I’m right hurr
Rhinestones on deadstock, I call you herb
Lady in pink, dog, you ain’t hip-hop
’96 couldn’t get a job in Nike sweatshops
Get your free kicks from your stylist guy
Mighty Mi diggin’ for them sample-sized
[…]
Never really knew who Keith Hernandez was
Cause ’85 I was Erick Dickerson
You in a size 56 Spud Webb lookin’ ridiculous
[…]
Ask Dwight Gooden, I die for this song
And these kids in New York with them Iversons on?
(Take it off)”

Where sports jerseys are worn with such pride and historical awareness, you can bet the music is gonna be a bit on the nostalgic side as well. “I’m that idiot still dissecting “Critical Beatdown”,” admits Eon, dubs himself Chill Rob E and promises “a modern day “Ride the Rhythm”,” but “The Highlite Zone”‘s special honorary award goes to a hometown crew called Jazzy Jeff & The Fresh Prince. Indeed, “Rock the House 2000” finds the indie rapper copying a routine Will Smith came up with way back in 1987. Beatboxer extraordinaire Rahzel plays the part of Ready Rock C and while the grumbling Eon doesn’t quite possess The Fresh Prince’s energetic eagerness, it makes for a nice little tribute. Milo takes a trip down memory lane as well, on the DJ cut “Mighty Mi Iz Clickem’s”, getting busy over the beat of Eric B. & Rakim’s “Keep ‘Em Eager to Listen”, his partner chiming in: “From Illadel where stars are born / crews don’t even got DJ’s no more / Jeff is (Philly), Cash is (Philly) / cause if you don’t got a DJ you ain’t filthy.”

But stereotyping The High & Mighty as a nostalgic non-mainstream act would be missing the mark. Some of their ways may be ancient, some may be foreseeable. But there’s a verve and a vitality to their beats and rhymes that is nowhere near the statue of limitations. Mr. Eon’s vocal persona may be the proverbial acquired taste, but what at first can come across as strange or awkward, eventually turns into a delivery that unlike so many others has character. Set to a variety of tracks unfolding before our ears who just seem to be caught in the process of spreading their impressive wings and shaking off yesterday’s patina (with Camu Tao contributing some of the album’s best tracks), the vocals on “The Highlight Zone” are the oil in the smoothly rolling ball bearing that is “The Highlite Zone”.

From the SportsCenter album cover to song titles like “Meldrick Taylor” and “Live from the Bullpen”, their fascination with sports is evident. But the actual lyrical references are limited, and if a cut happens to revolve around let’s say America’s favorite pastime, it’s done in an interesting manner. The track in question is “Betcha Life”, a farce about baseball betting with RA The Rugged Man as the bookie and Eon as the gambling fiend. Other sightings include producer Rjd2 on “Incorporate Anthem”, Vast Aire on yet another hook (“High Heat”), Cage on “Standing Room Only”, Eon’s gumshoe alter ego Dick Starbuck on “D.S.P.D. II”, and finally actor Michael Rappaport making his – not entirely serious – rapping debut on the 50 Cent-inspired “How to Rob an Actor”.

But it’s two solo efforts that end up being stand-out tracks. “I Wanna (But I Won’t)” is a simple rap parable about resolutions and how to follow them through, while “Fast Food Nation” takes a surprisingly outspoken stance against today’s junk food culture. Detailing the rise of McDonald’s and analyzing their strategy, Eon comes up with some very explicit accusations, making “Fast Food Nation” a lawsuit waiting to happen. For The High & Mighty as artists, however, it represents an unexpected but ultimately rewarding extracurricular activity. Going from mocking Boogie Down Production’s “Beef” with “Weed” to making a song that is actually sharper in tone than KRS-One’s dissection of the meat mafia is nothing short of a quantum leap.