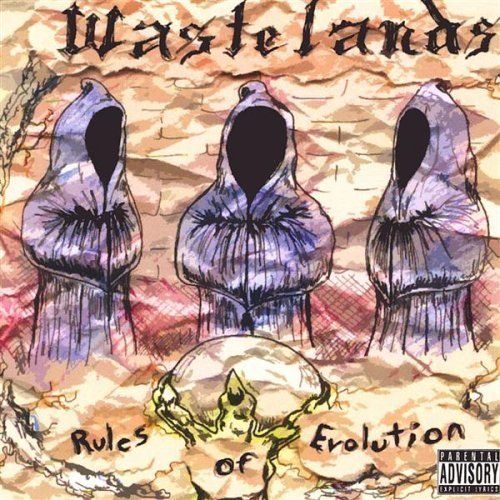 Everything has a story. Sticky Post-It notes were invented when someone was trying to make super glue. Big Daddy Kane became a rapper when the Biz ghostwriter happened to be in a studio. Osama Bin Laden was originally funded by the American government about twenty years ago. “Rules of Evolution” is the story of members in a hip-hop group. It’s not a Prince Paul narrative â€“ more “Ready to Die” than “De La Soul Is Dead”. Wasteland’s effort is more rough around the edges than a saw â€“ not necessarily a bad thing â€“ but it does successfully bring us into the Chicago-Milwaukee hip-hop zone; or, as they call it, the CHI-MIL Triangle.

The first song, Birth, is a minute-plus chant, a call to bring hip-hop back to its essence. It quickly segues into the height of the album, “W.A.S.T.E.L.A.N.D.S.” The chorus is a chronological reenactment of how members Augury, Denku and Short Fuze met, wisely dated by them talking about the “new” BlackStar and how dope “Illadelph Halflife” is. Word. However, the rap itself is hardcore to the floor, with lines revealing enough to make Scarface cringe:

“I was created into a world God created
The demons manipulated this Hell phased in
Violence, anger and frustrations were passed on through generations
The product of a statutory rapist, a sadist
Who I didn’t know what it was like to play with
A man I didn’t learn the game with
No explanation when characteristics he had
Showed me what to think with
If it wasn’t for God’s graces I would stray it, smoking bible pages
A recipient of currency exchanges
Not sensing that it was my soul that I paid with
All that matter was how much money I ended the day with
Who I blazed with, never focusing on who I caused anguish”

It’s followed by “CHI-MIL Triangle”, an anthem with a brooding beat more akin to fighting than connecting. In fact, all of the beats are more pitch black than Vin â€“ like Nonphixion and Foreign Legion throwing a party in your momma’s basement. Another arsenic cut is “Strung Out”, one I’m sure brings out drunk headbangers and frustrated backpackers alike at their live shows:

This is straight night music â€“ if there’s any sunlight around, you shouldn’t listen to it. The rough-riding beats and heavy lyrics throughout limit the album a bit, as it would be good to hear more dimensions of the group.

One cut that does delve a little deeper is “Reggin”, an analysis of Rush Limbaugh’s favorite word. It starts with a reflective guitar strum and a quote from Malcolm X, as said by Denzel Washington: “What would you call an educated negro with a B.A. or an M.A. or a B.S. or a Ph.D? I’ll tell you. You’d call him a nigger. That’s what the white man calls him. A nigger.” What follows is a rapped argument between Denku and Augury with great lines like “But my closest friends are black!” and “But the word is clean,” replied with “But you’re killing my self esteem.”

Wastelands’ “Rules of Evolution” is an interesting album, particularly for those who enjoy darker indie shit. However, others might want to wait until the next album which, as they grow, will probably be a more well-rounded effort.