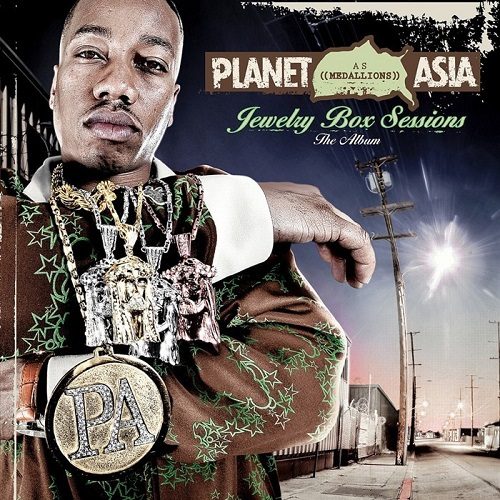 While I almost always feel like using the review to complain whenever I get a watermarked promo copy, I usually control myself since I feel it detracts from the album and the artist usually has no say in what the label does with his music. In the case of Planet Asia’s latest album I have no choice but to mention the new extremes reached when it comes to watermarking. With the sound effects and mutes used on this promo copy it made it almost impossible to listen to and definitely put me in a bad mood. The funniest thing of all is that in all their watermarking they managed to mute out “Today’s Mathematics” in its ENTIRETY but still left the water marks in so I get three minutes of silence with the occasional “promo only.” So while the PR person who decided to watermark this album reached their goal of avoiding bootlegging, they also went too far. See if this was some new act I’d never heard before or someone I didn’t particularly like, the promo copy would be in the trash and this review would not be written. Lucky for Planet Asia, I’ve been a fan for a while so I’m willing to put up with the crap this one time. With his new album, Planet Asia has gone for a concept album of sorts as he takes on the role of “Medallions,” a torch bearer carrying the flame from the original street-hoppers Big Daddy Kane and Kool G. Rap. With this new persona in mind, it’s no surprise that “Jewelry Box Sessions” is full of street-oriented raps that are uncharacteristic of Planet Asia. Much like the ill-fated watermarking, Planet Asia’s attempt at something new almost ruins the entire product.

Concept albums are usually done when an artist tries something completely new. In Planet Asia’s case instead of doing something new, he does something that’s new for him. In this case, Planet Asia fills this album with more street rhymes than one would usually find on his albums. “The Appraisal” is a slow, plodding track that’s O.K. for background music as Planet Asia mixes battler and street rhymes to introduce us to what this is all about. “Street Hop” has a better beat as Jake One plays around with a chopped sample and funky bass line. Planet Asia continues the message from the first track as his basic message is that he’s a dope rapper but he keeps it street:

“Back to that dirty shit, murderous clicks
Consecutive hits, street corner block executives
Shit is spooky, you got these corny niggas rocking doobies
Respect to the tassel and kufi
I come in peace but still I’ll hit you with the two-piece
This is truth juice produced
The food can never fall far from the tree
It’s just a few feet, once told life is a movie
Well I should win an Oscar for the best director of executioner stories
Shit is mine, I only shoot for glory
In this glorious role I transform the truth before I pollute your water
Where I’m from it’s a true safari
Niggas shoot up the party
Killas don’t die they just recruit your shorties
Only if the youth can absorb me
Cause none of them is dealing with the one, let’s hit em with gems
Mac militant, I speak form the genuine cloth
The bigger the balls the bigger the boss”

Planet Asia’s lyrics are for the most part up to their usual high level of complexity and dopeness, but the rest of the formula tends to suffer. The beats for the most part sound like weaker versions of true classic street-hop. “Fuck You Up” is the same bass line repeated over and over again with anemic drums. If it were a dope bass line it wouldn’t be an issue but it’s nothing impressive. The worst beat and song on the album is clearly “Fly Boy” which can’t even be saved by an appearance from Bun-B. Fliptones drops a slow and forgettable generic southern beat complete with synths and the occasional drum roll. The concept of the song is one that was just done and done better by Lil’ Flip and Mike Jones on Flip’s “I Need Mine” album. To add injury to insult, they chop up the “fly” in the hook almost exactly as Three Six Mafia did a year ago to make the song even less original. It’s a shame considering Bun-B absolutely murders his verse.

Thankfully, no other song comes close to the mess which is “Fly Boy,” but Planet Asia is definitely off his game on “Jewelry Box Sessions.” About half the beats are good while the rest are as generic as can get. Asia himself is as clean and crisp in his verse execution as he’s always been but the songs still lack in the hook and concept departments. “Havin’ Thangs” is your typical from something to nothing hustler’s tale and is only saved by Planet Asia’s verses. “Hustler’s Anthems” once again features some great verses by Planet Asia, but the hook is just some boring and unmemorable simplistic drivel. While it’s clear that Planet Asia will never be Chamillionaire or 50 Cent when it comes to hooks, he could come up with some better stuff than he does here.

As Medallions, Planet Asia isn’t nearly as appealing a rapper as he was before. When he’s focused on being street he tends to suffer the same pitfalls of other street rappers, mainly repetitive concepts. His lyrics tend to be up to par, but they are held down by weak hooks, concepts, guest spots, and subpar beats. Next time around Planet Asia needs to stick to being himself and let the wack street rappers take care of the wack street rap. The production needs to step up too and Planet Asia can help by asking DJ Muggs to produce a beat for him instead of just having Muggs co-signing on the promo material. There’s no doubt that Planet Asia is still the dope rapper he’s always been, he’s just hit a bump in the road with his latest album. Hopefully he can recover the next time around instead of continuing the trend started on “The Sickness: Part One.”