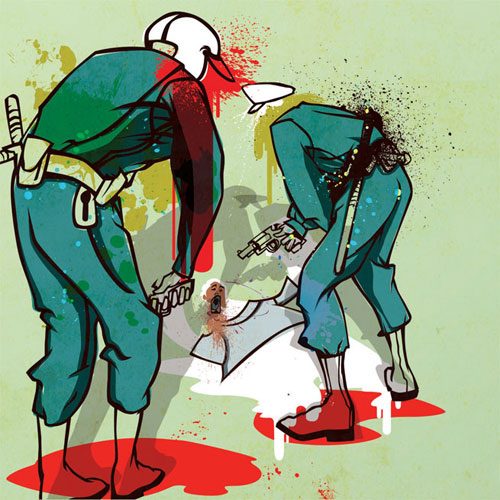 Gensu Dean first came to my attention when he collaborated with Large Professor to provide a beat that could well have been crafted by the grey-bearded great himself. It was actually his debut single, and to obtain verses and a video clip of somebody so well-respected is as good as any â€˜co-sign from Kanye’. On the other side of the coin, Planet Asia is an emcee I’ve heard plenty of music from, but never really absorbed much of what he has to say despite finding his voice incredibly easy on the ear. He is one of those emcees who could say the dumbest shit and still sound good. Of course, there is a depth to Planet Asia’s style of rap and that is where the strength of “Abrasions” lies.

“Abrasions” is as rough and ready as the name implies. Gensu’s beats are drum-heavy yet possess a quirkiness to separate him from the atypical New York sound that Extra P and the like provide. “God Hour” plods along nicely with Planet teaming up with AA Rashid and Tristate â€“ all complement each other well, providing a very abstract almost Ghostface Killah-like style of slang rap. Part of the fun however, lies in deciphering the wild metaphors and appreciating the vocabulary.

Gensu does his best Alchemist impersonation on “Faces of the Dollar”, an addictive beat that Planet Asia uses to rhyme about nothing in particular. Planet Asia has often taken advantage of the Eastern sound, most notably on his Cali Agents projects, and it tends to be his more accessible records that are predominantly of this ilk. “Listen” sees Planet Asia even admit he enjoys spitting over strange loops, yet ends up being one of the more â€˜normal’ tracks. “Bar Mitzvah” is Planet Asia doing what he does best â€“ varied vocabulary and masterful flow. He throws in plenty of one liners that will have you thinking â€˜what exactly does he mean?’ â€“ “I leave the track circumcised” being a prime example. Much like Raekwon and Ghostface, it can get challenging at times, especially with Planet Asia often delivering bars at twice the speed of some other emcees. This is partly down to some of the production, which leans on the frantic side of things perhaps a little too often to be easily digestible.

There are a few too many average tracks for “Abrasions” to really stand out in 2013. “Time To Get Dough” is rather forgettable despite featuring Twin Gambino. I don’t believe there is a rapper that sounds harder than Twin Gambino, and he provides his pain-riddled voice atop a kick and snare combination that is relentless. If you haven’t had the pleasure of listening to Big Twins (affiliate of Mobb Deep), it’s akin to hearing DJ Premier pick up the microphone after a lengthy bout of throat cancer. As intriguing as I find Twin Gambino, it can’t hide the played out concept. Calling in Tragedy Khadafi and David Banner can’t redeem the oddly spiritual “Thyself”, with Banner’s stop-start verse ruining the flow of the song. Khadafi comes nice as expected, and it raises an interesting idea for the future â€“ Khadafi and Planet Asia should collaborate more as their styles sound like they would go hand-in-hand.

If you weren’t a fan of “Black Belt Theatre” then “Abrasions” isn’t likely to change your mind. Planet Asia has settled on a style of production that admittedly does suit him, but doesn’t ever blow you away. Granted, this helps push the focus on to his abstract verbiage and stellar delivery, leaving you with the impression that Planet Asia could rhyme and rhyme until the end of time. Whilst the record may not touch on many issues, “Abrasions” does offer a very refined example of â€˜slang rap’ in the vein of the guys I’ve already mentioned. But peel away the layers and there is more to Planet Asia than just slickly written street raps and thinly veiled threats, it’s just the production never quite fulfills Gensu’s potential. There are one or two weak beats on here, but the majority of the record is decent at best. This can help the lyrics become more visible but may deter some from giving “Abrasions” the time it deserves.