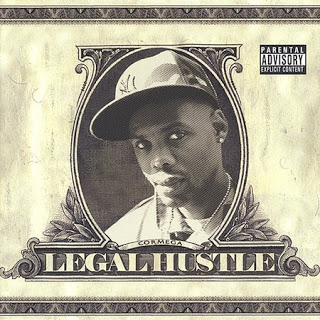 Cormega’s name is synonymous with an underground hip-hop aesthetic of succeeding against the odds. Unfortunately ‘Mega had more than just a strike against him for being in the legal system, a fact made infamous by a shoutout from Nas on “Illmatic.” There’s a long story that follows of good friends being bitter enemies, but the short version is that ‘Mega felt that Nas could have done more to help his career after his release but didn’t. There’s been a war of words ever since, culminating in “The Realness” in 2001 and “The True Meaning” in 2002.

That is to say, the perception of both the rap audience at large and of critics in general was that ‘Mega was solely obsessed with “getting even.” The unfortunate and unfair downside was that ‘Mega showcased some of the best vocal delivery and lyrical acuity found in all of New York, only to be written off as a hater envious of Nas’ success. It’s a perception that Cormega is working hard to change on his new album “Legal Hustle,” an album which finds him spending as much or more time putting on the next generation of rap superstar’s as forward his own career. Some of the newcomers show much potential, such as female rapper DoÃ±a, hoping to deliver on the promise similar artists like Remy Martin haven’t. You can hear her featured entirely for delf on the track “Respect Me”:

DoÃ±a: “Aiyyo real niggaz live off of principles
If you want it bad enough, I’ma give it to you
If your nigga ain’t faithful, then fuck him too!
I don’t trust too many niggaz, just roll with a few
East New York, flooded with blood
I took care of responsibilities before I turned to dove
They quick to judge, when they see me in the street
But fuck ’em, y’all don’t really live like me
In the hood like me, with crack heads and dopefiends”

Don’t presume that she outshines ‘Mega though, as this is still his album. Even though Cormega has a variety of big name guests like M.O.P. on “Let it Go” and Ghostface Killah on “Tony/Montana” there’s no question who the star is of the album. The infectious dancehall stylings of “Dangerous” featuring Unda P and Vybz Kartel could make this one a huge crossover hit for one of rap’s best kept secrets, but there’s nothing hidden about the science he drops in the first verse:

“Like +City of God+ adversity is Medusa’s curse
I been hard when facin immeasurable odds
I clearly evolved like Bibby when Webber was gone
The jewels keep me cool when the weather is warm
The coupes be as hot as the strip that we on
Though I’m dealin no more I’m here, what sets me apart
You can get wet for real, this ain’t a mirage
These are treacherous waters with dangerous sharks
When my patience was gone, I came from the heart
+The Realness+ gave me my start, I’m here playin my part
Like an illustrious picture, your face in my palm
When the game is on the line I’m amazingly calm
Whether I’m in the streets or a Jamaican resort
I’m a stay doin me that’s the way I was taught”

Cormega’s ability to connect with his audience is all about his voice. His flow seems to pour over words like maple syrup on panackes instead of just spitting them out. Never behind the beat but never seeming to be rushed, it provides the aura of relaxed confidence to his speech, a true hustler of rhymes. Combined with a smooth voice that is part Nas, part MC Shan, and 100% Queensbridge, Cormega’s raps on songs like the self-produced track “Beautiful Mind” are pure bliss. He uses a familiar but effective piano loop for his loquacious lyrics:

“For years we ran the projects like a marathon
these catastrophic, my time depth of pride became my own conquest
Subsequently some are with me others ain’t yet, the gutter’s within me
I wish for nothin except that my mother was with me
Some place judgment against me based on nothin but envy
They pray for +My Downfall+ like the song by Biggie
Born in the city which never sleeps till rest in peace
It’s carved in stone some starved while others bled to eat
Rap is my legacy I leave my seed my destiny
except I hope she never see the treachery success will bring
the trife life and death of kings
I’m from the rarest breed of people who rep the street and spit poetically”

The trademark of Cormega’s best work over the years has been his ability to paint verbal pictures not only noted for their clarity but for the perfectly chosen music that brightens the colors of his portraits. Whether it’s the gritty static provided by Ayatollah on “Bring it Back,” or Emil’s continual ability to crank out bangers like “Beep Blue Seas” featuring Kurupt or “Redemption” featuring AZ, there are very few joints here that won’t be pleasing to the ear. Unfortunately one of the tracks to take ‘Mega to task for is his own on “Hoody,” which basically sounds like “Realms of Junior M.A.F.I.A.” lifted in it’s entirety – not that it’s a bad choice, just that it sounds too odd to not hear Lil’ Cease and Biggie rapping on it. It’s also a little surprising that Large Professor raps on “Sugar Ray and Hearns” but doesn’t produce it – J. Love does instead. It’s still a great duet nonetheless, worthy of the two boxers named in it’s title.

It’s good to see Cormega making a “Legal Hustle” to get his name further recognized both in the music industry at large and within hip-hop in general, rather than having to resort to the much less legal hustle of the streets he came from to make ends meet. Although he’s been overlooked for years despite spending more time paying dues than 95 out of 100 rappers you’ll hear this year, Cormega shows not only patience in putting out “Legal Hustle” but wisdom by moving beyond beefing with Nas, subsequently paving the way for others to come up behind him. As good as “Legal Hustle” is though it’s still held back a little simply by the fact Cormega isn’t given more opportunities to shine on his own, only wholly dominating two tracks. It’s hard to deny though that “Legal Hustle” will make an impact not only this year, but in years to come. Cormega, keep on shining.