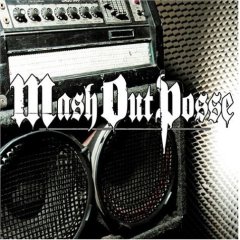 In 25+ years of rap history, there have been countless artists who have embraced hard rock as the backdrop to their hip-hop. Run-D.M.C. was the first to break this trend nationally with “Rock Box,” opening the way for everyone from KRS-One (who sampled AC/DC) to Cypress Hill (fond of Black Sabbath) to introduce it into their songs. In some ways it could be seen as reclamation of a genre that wouldn’t exist without pioneering black artists like Chuck Berry and Jimi Hendrix. The only fair and true assessment though is that hip-hoppers like to headbang just as much as the stereotypial white kid in the suburb listening to W.A.S.P. albums. Divisions between genres of music exist only in the minds of consumers, and it only takes the right groundbreaking artist to break down the walls. Run-D.M.C. fans beget Aerosmith fans, as Linkin Park fans do Method Man and Xzibit.

Into that fine tradition steps the Mash Out Posse, better known to their legions of fans worldwide as M.O.P. Even without the hard rock music, M.O.P. can be considered one of the hardest rocking groups in hip-hop. Billy Danze and Lil’ Fame are two of rap’s loudest, angriest, and most violent lyricists. Done wrong this would make horrible music of interest to no one, but done RIGHT it creates adrenaline pumping rap that makes you thrash like any good Megadeth song. 2000’s “Warriorz” was in that respect the penultimate M.O.P. album to date. The chemistry between the two MC’s had never sounded better, the music was perfect, and the lyrics and delivery were as clever as they were angry. It’s been four long years since this masterpiece, with only the compilation album “10 Years and Gunnin'” to tide over their fans.

With the recent announcement that M.O.P. was inked to join Jay-Z’s famed Roc-A-Fella Records, and their subsequent appearances on several Roc CD’s, anticipation of their new album is at an all-time high. This is not that album. By using their full name “Mash Out Posse” as both artist and album title, they are indicating that the album is part of the M.O.P. legacy, but not the long-awaited Roc-A-Fella debut. Instead this album is a chance for M.O.P. to dive headfirst into a pool of rock music that to date they had previously just dipped their toes in. Indeed the group has a band of guitar slingers who “mash out” the rock to go with the hard rhymes of Fame and Danze. Credit ‘Ill Will’ Fulton and Larry ‘Son Shiner’ Devore with handling those duties, while Kareem Lamar plays bass and both Sean Cameron and Anthony Realbuto play drums.

There are few rappers who could have carried off the transition from hip-hop beats to crunchy riffs as smoothly as the Mash Out Posse does here. Their style was tailor-made for this experiment, creating what Prodigy once dubbed “heavy metal for the black people” on a Mobb Deep song. Their New York City pride shines through on “Ground Zero,” repping not just for their own native Brownsville but for everybody locally and globally influenced by the birthplace of hip-hop. Like a good Audioslave or Rage Against the Machine track, the music does not overpower the vocals – it just builds up the energy of the vocalists on top of it. The funky flow of Fame doesn’t dissapoint:

“Funky beats and my dope beat rhymin make it so simple
We are the representation of ‘Warriorz’ monumental
Handle your business, deal with your issues, let’s make this official
Before I put my fist to my pistol and be forced to lift you
(YOU WANTED IT?) You aimin punk? (GET IT GULLY!) Before you start
I’ma POP in the name of my dearly departed (MISTER YOU BETTER)
Respect me, it’s the F-I-double-Z-Y, W-O-M-A-C-K
Motherfucker from M.O.P. (YES!)”

Never one to play second fiddle, Billy Danze rips it too:

“The First Family nigga is me nigga B.D. nigga I’m comin
M.O.P. nigga, O.G. nigga, WATCH YO’ ASS!
Amazing how we handle ’em, take ’em and dismantle ’em
Blam blammin ’em like Cam and ’em, leavin them scramblin
Hopin to damage ’em, ain’t no time for panickin
I lift the nose of this cannon and slam one in your face (FACE!)
I do what I gotta do, murder international
Ghetto problem we’re blastin you to put you in your place!”

New songs like these will not dissapoint M.O.P. fans in any way. Some of this album though is not quite new. While all of the rock beats are original, M.O.P. has recycled vocals from some of their older songs and chopped them up into a new presentation. The listener’s first response will be deja vu and the second will be, “Oh yeah – I have heard that before!” Some songs don’t even pretend to be anything other than rock remixes of the rap editions – “Calm Down” and “Stand Clear” both share the same name as the original. Others are a little more subtle. “Stand Up” remakes their song “G-Building” by giving it a new chorus and substituting the phrase “stand up” for some of the original vocals in strategic places. “Robbin’ Hoodz” is less subtle – it’s almost entirely the same as “Ante Up” except for the rock riffs and the inexplicable fact that the song isCENSORED despite the album cover having a typical “parental advisory” on the front.

In summary, fans of M.O.P. will undoubtedly enjoy this album, which may prove to either be a one-off side project or a full time way for them to dabble in hard rock. Hard rock fans who know nothing about M.O.P. may find the Mash Out Posse to be a great introduction to their hip-hop world. On the whole it’s a success. While more original material would have been appreciated, it’s possible they are holding it back for the eventual Roc-A-Fella debut, and thus somewhat understandable. The new songs are worth the price of admission, the rock remixes are acceptable, and on the whole it bangs almost as much as any other legendary M.O.P. album. Almost. One can accept Mash Out Posse as a side venture, but most will still want to hear them “rock” with DJ Premier and the cream of hip-hop producers. This album will only serve to build anticipation for the WHOLLY new M.O.P. album even further.