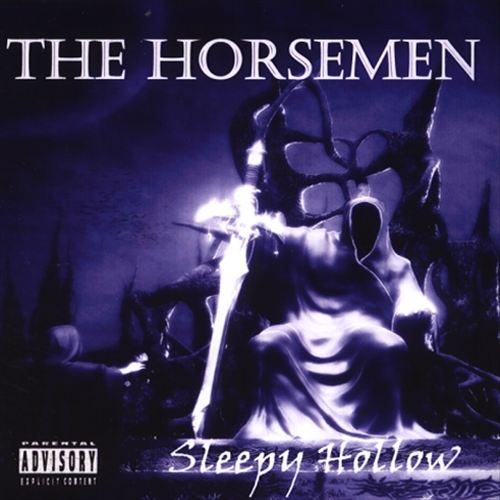 With a name like The Horsemen, you’d expect this group’s subject matter to be dark and menacing. An album called “Sleepy Hollow” doesn’t change things, evoking memories of the classic Washington Irving tale. The cover art, depicting a shadowy figure holding a magnificent sword with twisted trees in the background, further suggests that sinister music is held within. So when you pop in this disc, you’d expect to hear some Gravediggaz type shit, right?

In this case, you can’t judge a book by its cover. From the get-go, “Sleepy Hollow” is an eclectic, varied collection of hip-hop. “We Be Them Horsemen” introduces the duo with flashy, blindingly fast rhyming. The production contains traces of a southern bounce influence with a speedy string loop. What’s odd about track one is that nothing else like it is heard on the rest of the album. This is a perfect example of the inherent flaws of an album like this: The Horsemen seem to have no idea what kind of artists they are. The musical backdrop on the album varies from jazzy smooth-listening to club-ready dance tracks. The same problem occurs with the lyrics, which jump all over the place. Don’t misunderstand me, there is nothing wrong with variety. In fact, many rappers are dragged down by the monotony of their music. However, an album that combines so many different themes, concepts, and musical values as “Sleepy Hollow” is doomed from the start.

Since the subject matter is so scattered, there are undoubtedly a few songs that the Horsemen will nail. “Head on Collision” is a straight battle track, with laid-back production that sounds just right. The lyrics are on point as well:

“Attacking your rhyme skills like a head on collision
Hope your mic got airbags cause your seatbelts are missing
Niggas listen, shouldn’t have fucked with the Horsemen’s what you wishing
Now its too late ’cause now our mindstate’s on a mission”

“Twistin'” puts a surprisingly effective spin on the Cristal-popping club track of today. The beat is rough, but K-Duv and Vis drop descriptive verses on their pursuit of ladies in the spot. Remixed with a more involving beat, this cut would be pure heat, but it stands nonetheless as proof of the duo’s storytelling abilities. The excellent “Welcome To The World Of Vis” slows things up a bit, and Millionaire pumps out a beautifully mellow jazz track. Unfortunately, these are just interludes between uninspired joints such as “Move Ya Azz” and “Leavin’.” Even K-Duv’s solo song is ruined by an irritating hook. The discrepancy in quality from song to song plagues the album just as much as the conceptual shakiness. The result is that “Sleepy Hollow” is very uneven.

It is sad to hear such potential unfulfilled, but it’s downright depressing to be exposed to the sexually explicit skits that make an appearance here. There are only a few, but they are overlong and COMPLETELY pointless. The flow of “Sleepy Hollow” is disrupted frequently, but these poorly placed skits just make it worse.

This album reminds me a lot of Danja Mowf’s 1997 album “Word of Mowf.” Both contain songs of the widest variety, and skits fill out the track listings nicely. Danja Mowf’s debut is the ONLY record I have ever heard that successfully executes what “Sleepy Hollow” attempts. The reason for this is that constructing an entire album of such varied music is very difficult. Only with brilliant concept songs and versatile rhymes can such a work succeed. The Horsemen show flashes of both, but there are only a few songs that feature both quality lyrics and production.

The Horsemen certainly have talent. This much is obvious at various points throughout the LP. If they had focused their collective energies to a more unified type of hip-hop, instead of trying to cover the entire spectrum, the results could have been great. As it stands, though, they try to do too much. There is some material that is worth a listen here, but there is more that isn’t. With a little more focus, these Mount Vernon, NY emcees will put it down in the future. “Sleepy Hollow” is just too randomly constructed to work.