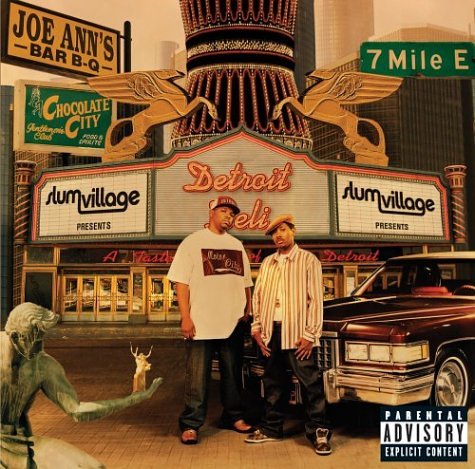 While “Fantastic Vol. 2” may have had people asking “What happened to Volume 1?” it certainly wasn’t because the second edition was a dissapointment musically. In fact producer Jay Dee was hitting a career peak in 2001, and considered to be one of hip-hop’s most underrated musical maestros. What was a dissapointment was the fact J Dilla had abandoned the group on their sophomore release “Trinity (Past, Present and Future).” While the lyrics had improved somewhat with new member Elzhi taking over Dee’s (often lackluster) rapping duties, it was hard to deny the feeling that something was missing in the mix.

When you’re living in Slum Village, things only seem to get stranger. MC and founding member Baatin had to leave the group due to his erratic and unpredictable ways. The real story isn’t well known but he was reportedly diagnosed with severe schizophrenia. Out of the original trio, only T3 was now left. Would he cash in his chips and call it quits? Don’t bet on it. T3 went all in, sticking with Elzhi and stepping back from his production duties to bring in Young RJ and Black Milk, collectively known as BR Gunna. In truth they had already worked with SV in the past, but their role on “Detroit Deli” is greatly enhanced – either or both can be credited on eleven of this CD’s 13 tracks.

The change in direction and production seems to have worked wonders on this third SV release, bringing the group full circle back to where they started. It won’t be hard for either of the BR Gunnas to find work in the industry after this. The opener “Zoom” featuring Phat Kat is a pleasing mixture of light background instruments and a bap-to-tap drum beat. “Dirty” is by turns suave and hilarious, thanks to a chorus by Ol’ Dirty Bastard but a devilishly delicious symphonic backdrop and smooth flowing SV raps. Speaking of funny, the “Late 80’s Skit” should have been given the chance to be a full song, even though the sound was a little more EARLY 80’s. It’s a nice warm-up leading into their first single “Selfish,” which was produced by and features Kanye West. Though he’s the hot MC and music man of the minute, it’s to his credit that he doesn’t steal SV’s spotlight. T3 seems to have grown into his mic duties nicely, and deserves his shine:

“To my thick chicks down in Texas
All the way to New Orleans where the girls cook catfish
And in L.A. every chick’s an actress
Hollywood status with the shaded glasses
To Detroit, yeah the place that I rest
Where the ladies got ass to sell a lotta sex
And Hot Atlanta y’all is one of the best
Where they speak Southern slang and smoke la cess
And New York women are way too fresh
Too much on your mind – let me ease that stress
I wish you all were mine, it’s so sel-fish
Maybe I’m feelin myself too much I guess
But, to my ladies all across the globe
In small towns that I don’t even know
To all local international codes
Whether you see me in streets or catch me at shows
I’m callin…”

John Legend gets his propers too, for singing a smooth hook that goes extra nice with Kanye’s relaxed and refreshing piano backdrop. Long-time SV collaborator Dwele shows up to provide his own smooth vocals on “Closer” – you probably remember him from the SV single “Tainted” off the last album. The music continues to roll with “Old Girl/Shining Star” featuring Melanie Rutherford, who also adds her personal touch to the very personal SV song “Keep Holding On.” Just before things can get too serious though, MC Breed drops in to make his own contribution to the delicatessen with his own style of Flint funk for “It’s On”:

“I write a verse and leave rims on top of the page
The showstopper, but shit don’t stop offstage
I do an all night party dawg
Have girls goin wild like the Mardi Gras
High, fucked on five cars, lookin at big screens
Bumpin that Villa’, smokin that killa
No matter how old I grow, blaze up y’all
Do the damn thang ’til my days up dawg, it’s on”

Things wrap up nicely with the frentic and tense cut “The Hours,” the synth funk stylings of “Things We Do,” the organically lush “Count the Ways” featuring Dwele (this would be an excellent choice for second single) and the aptly named “Reunion” where Jay Dee drops in for a welcome guest appearance, and actually kicks some of his best verbals. The group seems all in stride here, and set the right note with the words “we’ve been misquoted, misconstrued/misunderstood and overused/so we take this time to set the record straight/critics, get the diddick, we did it anyway.” The closing verse is a tribute from Elzhi to Baatin, who hits home with the words “I heard you on medication/had an illness you couldn’t heal with herbs and meditation/and believe me, me and T3 kept it low/don’t take it as a diss, this is just to let you know that I love you.” Word. I think we all hope Baatin gets his mind right and makes a strong comeback. As good as “Detroit Deli” is (and it’s easily their best album since the first album, and probably better lyrically) they’d be one hell of a supergroup with him back in the line up, and maybe even seeing Jay Dee drop a beat or two, or rap or three. If it takes a village to raise a child, then it takes a surprising comeback from Slum Village to raise the standards for hip-hop music.