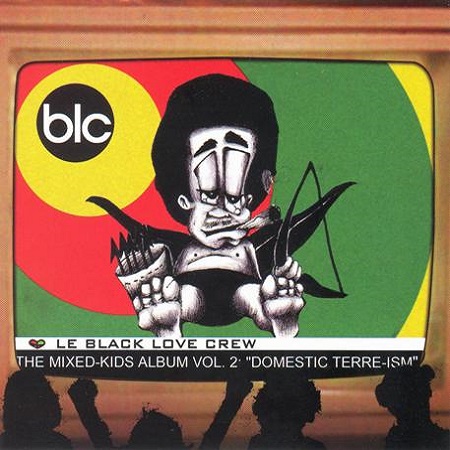 In 2004, hip-hop is pretty much cruising on auto-pilot. You’ve got your oversized SUV’s driving safely like anxious moms, your upscale Bentleys in the fast lane, your Hummers crawling through the urban jungle, your classic rides, your hoopties, your Pussy Wagons, your Pimp Mobiles, tour buses on their way to the next gig, stretch limos on their way to another award show, and lots and lots of everyday average cars. Occasionally, you spot a hitch-hiker along the road. The cops are there too, testing everyone’s nerves but still proving they have reason to pull people over. You can also witness speeding, reckless driving, red light running, drunk driving, u-turns, acts of road rage, car chases and car crashes, but you hardly see anybody willingly take a different route. The highway that is hip-hop has become predictable. The only one who can be expected to change lanes is the listener. It doesn’t take a stunt actor to get out of one car and into another, all it takes is curiosity. And it happens all the time. People who have been reared on commercial rap discover underground hip-hop, and vice versa. If anyone ensures the competitive spirit of this music, it’s them.

It’s also who Emanon and Dr. Oop had in mind when they recorded “Detour”. Over a jumpy piano arrangement, they came “to bring you some more of that old lose-control-and-get-wild,” as producer DJ Exile cut up an anonymous MC who’s out to “show the detour” to “people caught up in a circle full of trends.” Released in 2001, “Detour” is one of 18 performances who made it onto “The Mixed-Kids Album Vol. 2: Domestic Terre-ism”, Black Love Music’s second showcase after 2001’s “The Mixed-Kids Album Vol. 1: This Is a Black Love Mission”. If these names don’t ring any bells, it’s because Black Love Music is your typical local hip-hop indie with one established artist and a handful of hopefuls. The star of the Black Love show is clearly Dr. Oop (AKA Droop-Capone), who put out an experimental but still highly entertaining and funny full-length in 2002 entitled “Mad Hue Man Disease”.

Not surprisingly, this compilation is mostly a one-man show. Droop is here, he’s there, he’s everywhere. He reminisces on the simple life (“Simple Pleasures (Rmx)”), he professes his love for Mary Jane (“The Smoking Man”), and he’s on both of the posse cuts. “The mothers to the locs is familiar with the Droopy / hoppin’ through the hood blowin’ smoke like Godzooky,” he introduces himself on “Reign”, and with the demeanor of a more playful Snoop he makes his way through LA and pop culture in general:

“Guess who’s back in the muthafuckin’ house
with a fat spliff out the corner of his mouth
The ninjas recognize and peaches do too
It’s the bud-lightin’, buddha-lovin’ BL Crew
Dr. Martin Oopster King puts a start on things
Screamin’ “Fuck the Police” like my name was Sting
As I puff purple and gold, tu shoom ping
That Laker bud, so I’m blowin’ three rings
And throwin’ fo’ fingers up, I’m from the West Wing
where I rock it like Ming with a Vijay Singh swing”

Even though “The Mixed-Kids Album Vol. 2” nearly overdoses on Droop verses, tracks of his like the girl-watching “Peaches”, the soulful club shaker “Nights Like These” and “Generation Epps” are all good reasons for putting out a compilation that reviews and previews Black Love Music’s offerings. Especially “Generation Epps”, a metaphorical piece about generation gaps (and a sly tribute to De La Soul) is a former b-side well worthy of being unearthed. Droop also blesses the closing “Black Sand”, a collaboration with singer Eve of Red Headphone over a irresistible ska groove laid down by Mum’s the Word.

While the aforementioned tracks should be up to everyone’s standards, many others are not. They suffer from symptoms such as an uneven mix, crackling, distortion, or static. Obviously, this is part of what makes underground hip-hop, but why settle for less when you should get more? Listen to Wooly Mammoths “3 Bags Full” sampling (besides Mandark’s maniacal laughter and a dusty piano) Divine Force’s “Holy War”, and be stunned how low-budget hip-hop could sound so much doper in 1987. It doesn’t help that “The Mixed-Kids Album Vol. 2” is a bastard between a sampler and a mixtape, littered with mixtape drops but devoid of any real mixing.

And don’t think that just because Le Black Love Crew comes from the outer regions of the hip-hop universe, everything they do is new and exciting. Even the line-up of Kazi, Declaime, Spontaneous and Dr. Oop can’t save the excruciatingly bland “Smoke into the Microphone (Rmx)”. But there’s always a chance for redemption. Seized, for example, by Midas after his non-descript “Cash in Seclusion” on “Golden Cuts”, by using wordplay to weave many a DJ’s name into his tribute-paying verses. Trial and error and staying true to themselves is likely how the Black Love folks will continue on their journey, seeing as how far they’ve already come: “We started eatin’ government cheese / now the Black Love gang’s bookin’ shows overseas.” If you’re already a supporter, this album has enough exclusives to tickle your fancy, and for the rest of us, it can help us understand what exactly the difference is between LA’s two famous radio shows, Sway & Tech’s “The Wake Up Show” and Mike Nardone’s “We Came From Beyond”.