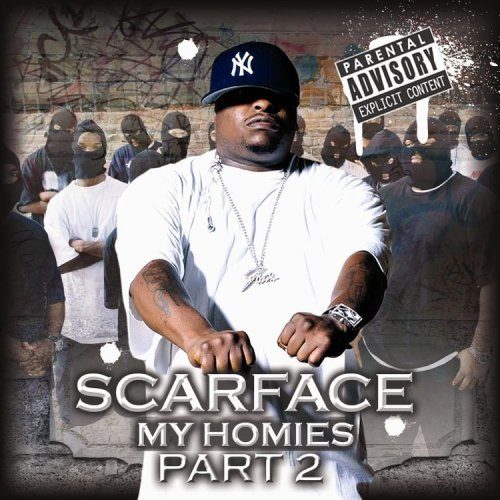 Scarface is back and the homies are happy about that. At least we can presume they are since the 1998 release “My Homies” put a lot of underground Southern rappers over nationally. Scarface’s own lyrical contributions to that project were not that memorable, but guests like Devin the Dude and Tela on “Fuck Faces” (released to single as “Sex Faces”), Seagram (R.I.P.) on “Sleepin’ in My Nikes” and U.G.K. on “2 Real” all got mainstream exposure thanks to the association with Scarface on this double album. It’s not hard to see why given that Brad Jordan is the largest member of the Geto Boys, not only in physical stature but in terms of his hip-hop reputation outside the group. When Scarface speaks people not only listen, they take notice. In hindsight that makes it a bit of a shame “My Homies” was such an inconsistant release, but in fairness it’s hard to hold weight for any artist on a double album and ‘Face was relying heavily on the “homies” to get it done – frankly some just weren’t up to the task.

Before going further with this review I’d like to clarify that my copy of “My Homies Part 2” is the one disc version. For whatever reason RapReviews.com hasn’t been consistantly serviced by Rap-A-Lot Records for a LONG time now. I was presented with a daunting choice when buying this album to review it at Best Buy – get the single edition for $9.99 while on sale or pay TWICE as much for the double disc edition, which was not on sale despite being released at the same time on the same week. How you like that? Fuckin’ bullshit if you ask me. If they had put the double disc version on sale too at an even halfway reasonable price, say $14.99, I would have happily picked it up. Two disc releases are pretty damn common these days and most stores won’t price them over $14.99 even when they’re NOT on sale as a result. In fact the second disc is usually an incentive to buy the album instead of bootlegging it, because the internet download won’t come with the extra shit, so the labels don’t want stores to overprice them either.

Why Scarface and Rap-A-Lot went this route I’ll never know, but given the original “My Homies” was such a mixed bag at two discs I couldn’t justify paying $20 out of pocket for something that might be all too similar – a few great songs and a lot of mediocre ones. Thankfully the one disc version of “My Homies Part 2” is satisfying enough, thanks to the largely strong choices of guests and several strong performances by Scarface himself. He gets things popping right away over the Tony Montana inspired music of the “Intro”:

“It’s darker than the hearts of men
But I ain’t scared cause I’m a soldier
I walk with my weapon across my shoulder
Refuse to live, yet impossible for me to say I’d rather die
Cause I’m a killer with the devil’s eye (uh-huh)
I want the world to feel my heart, my heart, my set, my set
And these niggaz who contested me regret that
Poisonin my own breed to terminate yo’ offerin”

He follows this up with a slamming song where Z-Ro and Ice Cube share the billing with him called “Definition of Real,” but for Z-Ro performances I prefer the track where he does a dead-on impression of Scarface while remaking “Man Cry”:

“I greet the Father on my knees, with a bowed head and humbled heart
My conversation is have mercy on me please
I just wanna be happy will it come to pass
Fresh out of my mind, been 27 years and every day I’ve seen is sad
Even though I’ve tried ’til I’ve cried I can’t even stand
Feels like I’ve died a thousand times but just can’t make it man
Ain’t nuttin different about me doin dirt
Except I’ve never crept up on a come up maybe that’s why the hustlin hurts
I remember just like it was yesterday I’m 16
Can’t find no love can’t find no peace I wonder what it means
Could it be because I didn’t choose the devil all the time
I became an outcast to the hood, restricted to my rhyme
Where I could not just live my life without my talent makin danger
Jealousy is now state jail from friends that turned to strangers
They hate me, I don’t understand why
I swear I never seen a man cry, ’til it was my own eye”

Despite the fact this is a new release, not all of the material that you’ll find here is original. Most notably the track “Platinum Starz” featuring Bun B, Lil’ Flip and Chamillionaire has been heard on the latters “Mixtape Messiah” release, but the track is a classic and does deserve a little extra shine. Not surprisingly Chamill’ has the longest verse of the three on the song and shines the most:

“Beam me up Scotty, yeah the force’ll lift him
Top on the drop yeah of course it’s missin
… Don’t want her man to know
That I’ma hit when I’m finished I’ma hand the hoe
back to her man befo’, he even have to know
A weddin ring – ain’t somethin I’ma hand a hoe
Do money grow on trees? Nigga the answer’s no
I treat G’s like seeds, get a grand to grow
Car lookin like the zoo in a candy sto’
Alligator on the flo’ with a candy do’
Can’t stand me no, cause I’m havin dough
I keep a tune on me just like a mechanic flow
You ain’t gettin paper what you up in the game for?
Gettin paper now, couldn’t be a complainer
Trunk lift up at a acute angle
Isoceles triangle pokin outta my swanger”

Generally speaking the quality of “My Homies Part 2” is a better value than the original Scarface organized compilation, at least as far as the one disc version goes. With well known rappers like Beanie Sigel and The Game appearing on krunked out tracks like “Never Snitch,” newer artists like Lil’ Ron and Yung Redd getting shine on smooth jams like “Street Lights,” and relative unknowns like the Partners-N-Crime getting their chance to shine with Juvenile on “Club Bangaz” the album is largely consistant and has enough diversity throughout to keep listener interest. Ending with a Geto Boys track titled “My Life” provides both a resounding statement about their future as a group and an excellent note to go out on. It may not have enough of Scarface himself for some people, but tracks like his wry “Pass the Itchy” will suffice until a more proper new full-length album. This won’t be the most essential album of the early 2006 season, but it’s far from a waste of time.