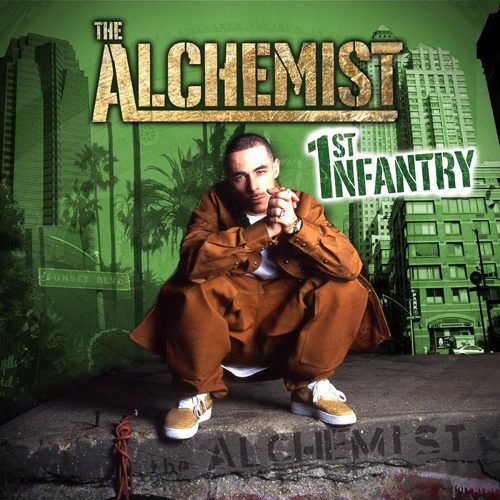 . In Part 2 of a two-part interview with RapReviews.com, The Alchemist talks about his migration from the west coast to the east, the formula for his memorable street bangers, and letting the world hear his voice.

WK3: Tell me about the new album.

“The new album, it feels like ten years coming full-circle for me.”

Alchemist: The new album, it feels like ten years coming full-circle for me. I’ve been able to make my name as The Alchemist, which is what I always wanted to do, to build up a brand. When you see the Nike logo, you always know it’s something you can trust as a brand. But I’ve always been able to do it by virtue as an artist—luckily I’ve been down with a lot of cats who I respect and the world does as well. I’ve been able to be heard by virtue of other artists. So now, it’s part frustration, and part is that I want to prove to myself and to the world that I can make a whole album. Sometimes you just hear one or two beats on the album that make it more special, because it was surrounded by a bunch of other stuff (that doesn’t hold up to those two). When I have a beat CD with mad beats on it, I was to just play one and people are like, “That’s crazy,” but if I play 10 of them it lowers the volume sometimes, because you hear so many. So I just wanted to prove it to the world that I can make a whole album, and not just come through and do one or two joints. These days you’ve got producers—me included—who come out and we make a name for ourselves by doing beats on everybody else’s album, out of nowhere. The producers I was raised off of—Muggs, Premier, Diamond, Large P, Showbiz, the list goes on—they all had albums that they did, groups that made their name as a producer and signified their sound, and then people came to them after that. I’m kind of doing it backwards, so there’s more pressure for me to prove that I can make a cohesive, relevant album for what’s going on these days, and rap and still play my position and not try to go out of my character to make what’s “hot,” so to speak. The game goes too fast, with trends and what not, but I’ma stand right here. In the club, when you looking for bitches and the club is mad packed, and you see a bitch walk by like “oh yo,” and you can keep walking around the club and try to find that bitch. But if you stand in one spot in that club, she’s probably going to walk past you again. I look at the industry like that too—I’m not gonna chase the bitches. I’ma stand right here, and they’ll come right back around.

Alchemist: I got down with a lot of people I’ve been down with since day one, a couple new heads who I have new relationships with. But I really just wanted to reach out to my family, get back the love that I’ve given. Everybody’s shown that. I’ve got Mobb of course, the LOX, Lloyd Banks, Nas, Cypress Hill, Devin the Dude gave me a crazy song man, shout outs to Devin and his man Rico. M.O.P.’s on there, Dilated, from the west coast my man Game, T.I. did a joint with his clique. We reached out to a lot of demographics. And it wasn’t even on purpose; at the end of the day we were like ‘wow, we just covered a lot of different angles,’ being that music is really regional these days. I just wanted to show my versatility but still do me.

WK3: There are rumors that you’re rapping on this album. Is that true?

“So there are two songs on the album that I rhyme on, and I think they’re both relevant.”

Alchemist: Yeah, let me confirm the rumors. I started out as a rapper at first before I even made a beat, it’s always been in me to be able to do my thing. I’ve neglected it over the years, didn’t really hone the skills like I should’ve been, but while I’m making a beat, I always had rhymes in mind, or a flow, or a particular artist’s cadence. I’ve been pushing my pen more, and being around people like P and Hav, those are the illest cats to me, so of course they’re going to rub off. Not the content or what they rhyme about, but their flows, their cadences, how they sit on a beat. I’ma put my own content into it, so I can speak about what I know. On this album, I decided I don’t want to rhyme on mad shit and turn people off. Unless I really got the product that’s so bananas the world needs to hear it…but I feel like the world needs to hear two joints. So there are two songs on the album that I rhyme on, and I think they’re both relevant.

Plus, I’ve got the LOX on my album, Jadakiss, Mobb Deep, Cypress Hill, Nas, Lloyd Banks. I’ve got heavy hitter rappers that I respect, so I wouldn’t want to disrespect them and what they do best and get on mad songs just because it’s my album. I really wanted to make it something that people appreciate, to still do what I’ve been doing but also let people know who Alchemist is. If anything, it’ll leave the listener like, “We want to hear more from him!” That’s what the album does—it shows you that I can do what I’ve been doing with the beats, but also that I’m relevant as an artist, I’ve got a point of view and my life is different. Especially in the era of rap where everyone’s talking bout killing, busting their guns, fuckin’ mad bitches. That’s dope that I kept it real on the album. There’s this song “Different Worlds,” with me and my man Twin, it basically tells my story of how I grew up. I didn’t grow up in the hood—I grew up in a more well-off neighborhood where I wasn’t fucked up—versus my man Twin, who’s like a brother to me now, his lifestyle is totally different. But we’re the same age, so I’m like, “Where were you when you were 12?” He’s like “I was busting my gun, selling crack;” I’m like “wow, I was riding a bicycle (laughs).” I just kept it real, and I think a lot of people respected me for that, because they know I’m down with Mobb, so they’re like, “he’s gonna be trying to murder everybody in the song.” Nah, man. It’s even doper to me in the era where you don’t know who’s real or who’s fake with the shit they’re saying. But you know I’m keeping it real, because who would want to say shit (like I say) and be lying? So I think across the board, I’ve been getting respect for the fact that I kept it real when I rhymed. People are like “that’s dope, he didn’t try to front.” Me and Twin are like a contrast, and I think it was brotherhood because it shows the strength of this music. Rap music can bring together every different bark of life, it’s not just about the money and how the industry just exploits rap to get paper off of it. Rap is a strong culture, and it raised me and my brother—we weren’t from the hood, but we still cliqued with people and respected each other because the music is a mutual love that we have. But definitely, I don’t want to turn people away, and have them think “oh, how is he going to rhyme on every song?” I do write a lot, but (I won’t rhyme a lot) until my shit is just incredible; I lay it down now and then, but I’m hard on myself. But I definitely want people to know, this is my album. The first single, I’m on. It’s a song called “Hold You Down.” It’s got me, Prodigy, this new guy Illa Ghee who’s down with the Mobb camp, and Nina Sky singing on the hook. It’s about loyalty, and I think that’s something that’s missing in movies and music—you’ve got movies where people are fuckin’ their man’s girl, all this grimy shit. I want people to remember loyalty, that’s something I live by.

WK3: You’re one of the game’s most sought after producers. Who do you like as far as producers go?

“I like a lot of cats who aren’t really shining yet, who I know on the low. My man Scram Jones, my mans 8-Off Aguilar…”

Alchemist: I like a lot of cats who aren’t really shining yet, who I know on the low. My man Scram Jones, my mans 8-Off Aguilar, this cat Emil, my man Joey Chavez, definitely Evidence with Dilated Peoples, his beats are retarded. Just Blaze — he’s already out there, but he’s just precision. Nate Dogg, it’s so many. I’m a fan of production, of course.

WK3: Now, when does the album come out?

Alchemist: The album drops officially, in stone, September 21st. I know there’s been a lot of dates that it was promoted (to release), and it didn’t drop, but everything is done and turned in, the video is shot, the single hit radio. September 21st, the album’s called “1st Infantry

,” and it’s The Alchemist album that people have been waiting for for a long time. Those that don’t know me, they’ll hear it, they’re going to realize why there’s been a small fan base of mine who’s been waiting for this. It’s just good music; it’s not catering to anything, I didn’t go out of my realm and do what people wanted me to do. There’s no A&R whispering in my ear making me do something particular, it’s going to be something special.