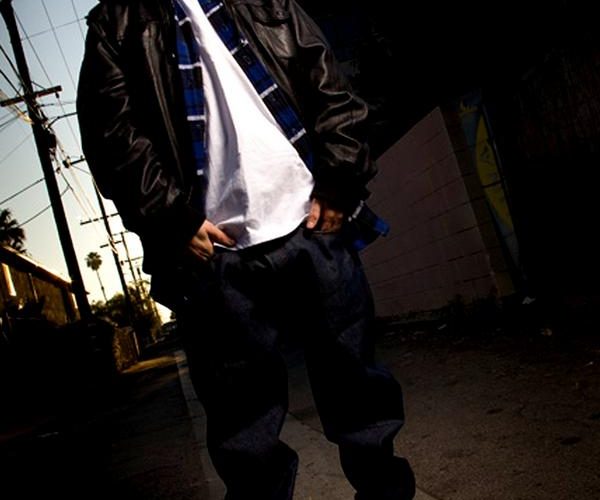 Everyone knows The Alchemist is one of the top producers in the game. What many may not realize is that he’s also one of the funniest people in all of Hip-Hop. This week RapReviews caught up with boisterous beatsmith to find out more about his latest album, Chemical Warfare

, and while we did talk about that for a bit the conversation quickly turned towards other matters, including tour pranks, dumb things people say, and why the yellow cab is the new private chopper. Enjoy.

Adam Bernard: Start me off by fillin me in on what you’re working on right now.
Alchemist: I’m workin on a new album, it’s called Chemical Warfare

. It’s pretty funky fresh. The album is in stores today and it’s a pretty interesting specimen of rap music.

AB: Who are you workin with for this one?
ALC: Kool G Rap is on there, Twista, Maxwell, Eminem, Talib Kweli, Evidence, M.O.P., Fabolous, there are a lot of guys in there.

AB: And a lot of them are names that you haven’t really worked with before.
ALC: Yeah, that’s actually cool. I didn’t want to do reruns and do my last album again, so I tried to switch it up a little bit. I worked with some great people. Timeless is more, I think, the answer as far as the selection of rappers.

AB: Didn’t you also just do the soundtrack for a video game?
ALC: Yes, myself an Oh No, we have a group together called Gangrene and they gave us our own channel on Grand Theft Auto 4 (Chinatown Wars) for the Nintendo DS. We just released a vocal version of it, too, because it was all instrumentals, so I got with a bunch of rappers who I respected and we did a vocal version just for the net.

AB: So are you a video game junkie?
ALC: No, actually not very much.

AB: Really?
ALC: I might have upset a couple people. Shit.

AB: I figured it would be the perfect release on a tour bus.
ALC: You know the problem with games is you play them and you’re beating each level and you’re achieving something and you get to final board and you win and what the fuck did you win? It’s really kinda unfulfilling after you finish a game and no trophy arrives at your door. It’s really anticlimactic. It’s like yeeeeea, OK, now what? You have nothing to show for the twenty thousand hours spent in front of the screen. But when I spend those hours in front of a Pro Tools screen I have albums to show for it and go on tours.

AB: Speaking of sitting in front of computers, a lot of other artists have been doing that in a lot of different ways. You have always been known as one of the kings of the grimy, gutter, type of sound that dominated the airwaves for so many years, what kind of feeling did you get when the vocorder / Auto-Tune artists started to make their appearance in Hip-Hop?
ALC: It was great. I think Roger Troutman might have been turning over in his grave but I think it’s amazing. As a matter of fact, I’ve remixed my whole album with Auto-Tune and I actually, for the first time, ran the beats through Auto-Tune. How do you like that? It’s like a Chopped and Screwed album but it’s Auto-Tuned and it’s dropping really soon. It’s fuckin amazing. The beats sound so much more robotic and in tune. It sounds so much more correct.

“Basically it’s reverse Auto-Tune, so it makes everything that’s in pitch out of pitch.”

AB: What?
ALC: Basically it’s reverse Auto-Tune, so it makes everything that’s in pitch out of pitch. That’s kind of like the medium ground that we met on, so it’s like a really good bad thing. Oh, and I guess I should add the disclaimer that everything I said was a joke.

AB: So clearly you ARE on the “Auto Tune is wack” bandwagon…
ALC: I’m not going to say Auto-Tune is wack. That’s like saying a certain drum machine is wack. Wack is wack. Auto-Tune is just a program that you use. It’s not like everything that you run through that thing is gonna be wack. Is it a little played out? Yeah, I’d say that.

AB: Obviously, judging by the last part of our conversation you are not afraid to play a joke or two. You’ve been on tour busses, so give me some of your best pranks.
ALC: The best tour bus prank is leaving a motherfucker at a gas station when he goes to take a piss. That one always works. That’s the killer prank.

AB: Who have you done that to?
ALC: It’s been done to me, actually. It was pretty killer.

AB: Which tour was this?
ALC: It was a Mobb Deep tour, but they came back and got me afterwards so it was all good.

AB: So what was the best one you’ve played on somebody?
ALC: A good one is in a hotel when we’re waking somebody up really early, putting saran wrap over the toilet. I won’t blow up who it was done to because they’ll take it personal, but we do a lotta dumb shit. We’re not against any of that stuff.

AB: There’s gotta be reciprocation for something like that.
ALC: Yeah, but once you get on the road it just becomes an ongoing thing. There have been some epic battles between individuals. I can say that much.

“I mean you should ask some of the lovely ladies who come to my show. Normally all the fly girlies swoon.”

AB: Is Alchemist a ladies man?
ALC: I would definitely say more than a man’s man. {laughs} Yeah, I mean you should ask some of the lovely ladies who come to my show. Normally all the fly girlies swoon. The fly girls are usually on my jammie. Yes.

AB: Can we get some dating tips from Alchemist? Where do you like to take a girl? What kind of movies do you take dates to?
ALC: I don’t really take girls to movies too much. I take the lovely fine ladies to the park or the beach, have a nice long walk, bring a little guitar, play some melodies, enjoy the evening with a little Chablis, or Merlot. Keep it classy. I’m a grown man now. You know, if anybody has to tell you they’re a grown man… they really aren’t.

AB: And earlier you listed some of the artists you worked with for your latest effort. Who was the most exciting one for you to work?
ALC: On this latest one I had a lot of fun working with Snoop. Every time I work with him it’s just like a party. The minute the beat comes on there’s like a circle of people hangin and smoking and something will come into his mind and within ten seconds he’ll have the hook already. Snoop is always a riot in the studio. He’s the shit. And also he smokes some really good weed.

AB: The name that piqued my interest was Maxwell. Can you now just call him up and have him sing to a date for ya?
ALC: Nah, but I get so much more attention from the lovely fly girlies now because I have Maxwell on my record. They’re swarming now. Really, I have a fictional Maxwell, like a stunt double. He doesn’t even show up, I just have his number and he sounds like Maxwell and the girls that I’m with, I act like I’m talkin to Maxwell and the panties just start removing. It’s like automatic panty removal.

“Maxwell’s a busy guy and I can’t busy him with the amount of women that are on my jock on a daily basis.”

AB: So basically the best advice you can give is to get a fictional Maxwell and an association with the real one.
ALC: And one that at least sounds or looks like him. Maxwell’s a busy guy and I can’t busy him with the amount of women that are on my jock on a daily basis. I could never call Maxwell that amount of times a day, he’d think I’m a stalker, so I had to hire a Maxwell voice, but it works really good.

AB: Finally, I know you’re not into the negativity, but has anyone fallen off that you never imagined would?
ALC: So then you basically want me to make enemies with one of my legends.

AB: Well, they can’t be a legend because they’ve fallen off.
ALC: Alright, I’ll tell ya what, I never thought Nelly would fall off. I’m not saying he fell, but… hold on a minute, lemme get this cab. You see how classy Koch is, they got me taking cabs! It’s ruining my rap ego. It’s really running my Hip-Hop ego, stepping out of a yellow cab. I think I’m gonna lose some record sales. Perception is everything, bro. I should be getting out in front of my crib in a helicopter.

AB: Forget that, it’s recession time. Plus you’re being ecologically sound.
ALC: That’s right! That’s the new cool thing, to be like hey, I’m with ya’ll.

AB: The carpool lane is the new cool.
ALC: I think you’re on to something with that, man. It’s like a king for the people who can stand amongst you guys. Private jets? Why would I want to ride on one of those with Eminem? Forget about it. That’s so… that’s so untouchable.

AB: So Nelly, as we were saying, he’s not where he used to be.
ALC: Yeah, I don’t know why, but he was such a big artist. Shout out to Nelly. He’s dope, and a friend of mine.

AB: So the moral of the story is he should work with you.
ALC: He has before. Maybe him working with me is the reason he’s not as big anymore. Maybe I fucked it up for him. Nah, I wouldn’t want to think that.

AB: Is there anything else you’d like to add?
ALC: I recommend that you floss regularly and don’t wear butt hugger underwear, always wear boxers, it’s much cooler. That’s about it.

AB: A buddy of mine by the name of Jake Lefco actually had branded dental floss he used to hand out at shows.
ALC: That’s great. He’s promoting hygiene. We appreciate that. Tell Jake Lefco to holler, man!