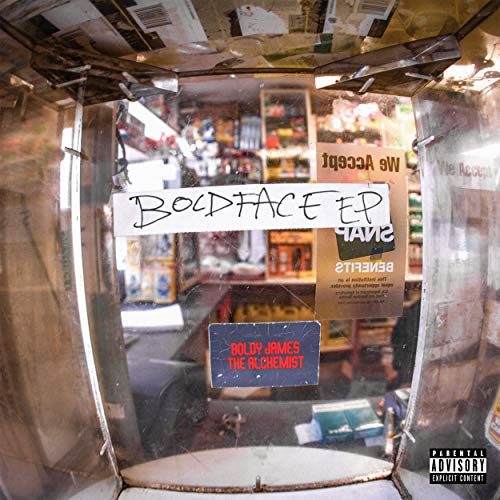 In 2013 Patrick Taylor wrote “Detroit is where it’s at“ while explaining the appeal of Boldy James’ “Grand Quarters”. He noted that the aspiring rapper took his name from a deceased drug dealer who was a close personal friend growing up, a way to keep his homey’s name alive while also giving an edge to his rap persona, and clearly it worked. Taylor: “Boldy is a good lyricist, which elevates his songs above their well-worn themes of drugs, money, and girls.” With that kind of praise for his previous work, I couldn’t deny my interest in his 2019 “Boldface EP“, though I must admit my surprise that it had been so many years between these two releases.

There are two explanations for the long hiatus. The first (and more likely) one is that we fucked up and weren’t paying attention while Boldy James dropped one classic after another. The second (and somewhat plausible) one is that Boldy James didn’t have the inspiration to follow up after such a grandiose Detroit debut until legendary hip-hop producer Alchemist came along and made James an offer he couldn’t refuse — I’ll lace the beats and you do the rest. With such a powerful combination the “Boldface EP” should be an instant classic based on their respective prior efforts. Is it though?

“You know my steelo, with or without the airplay” – Boldy James

Boldy’s certainly off to a hot start on “My First Offense.” The no-nonsense straightforward delivery Taylor praised comes through on this short tale, punctuated by the jazzy backdrop and smooth tinkling ivories on the piano. Just as the mellow mood takes over things go 180 the opposite direction on “Dinavolino” featuring The Cool Kids. “The point spread is too high to cover that line/you ain’t playin with house money, they’ll be in your house for me”. The menacing instrumental is a perfect compliment to the threatening rhymes, warning those who cross the path of any of these emcees about the consequences of their bad decisions.

Just as suddenly “Summer Nights” flips the script yet again. While Boldy James still warns that bitches “better have my money” from the get-go, the angelic choir behind him belies his antagonistic presence. Boldy does have that Detroit state of mind to his rhymes, but it’s eerily similar to laconic Southern rappers who sound heavily medicated and just as ominous. That’s entirely fair given the Southern sound has a foothold in the D far beyond what those who have never lived in Michigan would ever realize.

“Method to My Madness” may reflect that influence more than any other song on the EP, as Boldy Jones spits a patterned flow of speedy bars over a slow moving beat. Alchemist’s track is minimal to the point of almost being non-existent, but it suits the song well. It’s hard not to enjoy “Ill Advised” more though, as it sounds like a classic Alchemist track the late Prodigy would have been spitting his dunn slanguage on. In fact at times it’s a bit uncanny how much Boldy reminds me of the frank matter of fact way P delivered bars on a track.

Nothing either Boldy or Alchemist does on the “Boldface EP” misses the mark, and yet it feels like the appetizer the “extended play” title implies rather than a satisfying meal. Songs are over so quickly that you wish Alchemist had padded them out with another minute or two of instrumental even if Boldy James had nothing more to say. Conversely you wish he DID have more to say since this seems to be such a natural pairing of like-minded musicians. If this is the only time Alchemist x Boldy happens it will still be a worthy addition to the hip-hop archives, but I’m left hoping it’s only a sign of greater things to come.