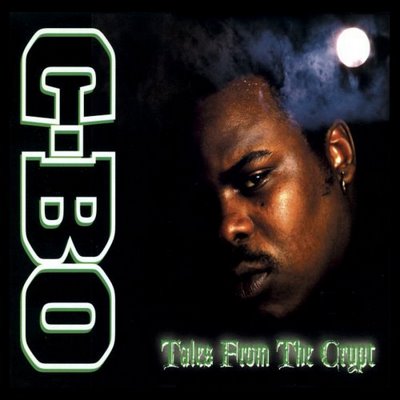 C-Bo :: Tales From the Crypt

Hey kids, here’s something to do: go pay a visit to your neighbourhood rap nerd- you know, the dude who won’t stop talking about the records you’ve never heard before, the obscure classics that flew above your head while you were too busy getting a hightop fade and getting polka dot pants. Ask said rap geek what the hardest gangsta rap record ever is, and he might reference Ice Cube’s Death Certificate, the first Lynch Mob record, NWA’s first two landmarks, but ultimately if his opinion is worth anything at all, he’ll have to settle on C-Bo’s monumental, unrelentingly brutal debut masterpiece.

Most recently heard on the Thug Lordz side project with fellow West Coast luminary Yukmouth, C-Bo’s longevity in a rap climate that regurgitates transient trends by the second is quite remarkable, considering his fervent adherence to G-funk formulas of yore. Of all the gems in his catalogue, however, none shines brighter than this modern classic, a sinewy, streamlined exercise in unadulterated, raw Sacramento funk.

To indulge in verbose, pretentious descriptions of this record would be unnecessary and contrary to the straightforward ethic of the record- this is molten, menacing hardcore rap, stripped of any pretensions or hints of subtlety. With all the venomous voracity of any of his more celebrated peers (Cube, Eiht, DPG, Celly Cell etc.), C-Bo’s vintage Kali cadence (unashamedly West Coast in every imaginable sense, right down to the intonation) and unashamedly stark lyrical outlook (you know, low-riders, drive-by shootings performed with double-barrel gauges, the rather messy scenes that follow said shootings) are grafted atop pounding, punishing drums, leviathan basslines and Gothic synth riffs. What results is an orgiastic eargasm for any gangsta rap enthusiast- the mammoth bass, morbid keys and bloodthirsty lyrical focus of “Murder That He Writt” should have any self-respecting West Coast maven’s hairs standing on end. The pulsating low-end and C-Bo’s homicidal menace transform California’s breezy euphoria into a nightmarish dystopia strewn with fallen soldiers and bloodstained pavements.

Really, it’s when one hears a record like “Tales From the Crypt” that one realises how caught up us jaded rap types have become- so many of us are so concerned with rap’s ongoing musical evolution and so hungry for the next outlandish, effects-adorned avantgarde masterpiece that we’ve forgotten the basic premise of a great rap record. “Tales From the Crypt” is an unabashed celebration of those basic ingredients- dope, trunk-rattling, bass-soaked production and a furiously passionate, arrestingly honest emcee. Certain heads may find the contents of this recording dated- everything about the record screams early â€˜90s West Coast, but the excruciating conviction of the album transcends time. If you need an example of G-funk at the height of its snarling potency, you can’t go wrong with this- throw this in the stereo and find yourself revisiting a time when rap music actually posed a tangible threat to Tipper Gore and the American establishment, a time when rap’s indignation could actually be taken seriously.