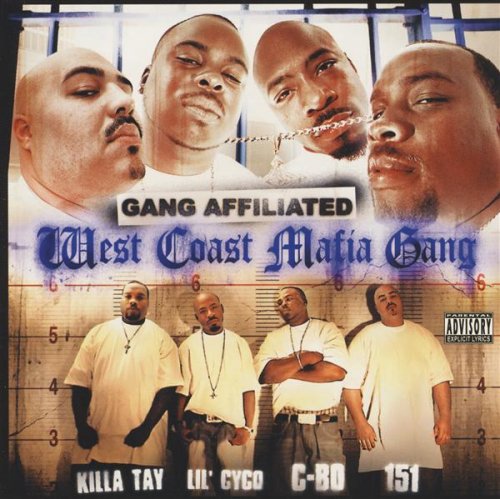 At first glance the starting lineup for West Coast Mafia Gang seems totally mismatched. C-Bo and Killa Tay have a combined eighteen years of experience in the music business (11 and 7 years respectively) while 151 and Lil Cyco just barely manage three, with Cyco actually releasing his “Street Chronicles” album the same week that “Gang Affiliated” hit store shelves – making him a largely unknown variable to purchasers of EITHER release. Still it’s hard to argue with the formula of putting together a click of hard-nosed West coast rap artists and having them release albums together. It worked for N.W.A. It worked for the Westside Connection. Why not try to strike gold again? With two fingers up and two twisted in the middle, the West Coast Mafia Gang hopes to be this year’s representatives for “real gangbangers, killers and drug dealers who really live this shit” as stated on their parental advisory “Intro.”

Production on “Gang Affiliated” is handled by a variety of different names – Moe Betta, Sparks, Mac Mosart, WCM Beats, Rhythm D, J Classic, Mac Pacino, Mike P, the list goes on and on. With so many people behind the boards maintaining a consistant sound could be difficult, but “Gang Affiliated” stays fairly consistant throughout, if at times a little bit cliched. “Let Him Do It” stands out thanks to some extra musical twonk from Mosart and a guest appearance by Dru Down. “Ain’t Built for This War” isn’t even credited in the liner notes, but it may be the smoothest track on the album, floating over a beautiful but deadly piano medley. It’s eeriely reminiscent of an Outlawz track, sans Tupac. “Armed & Dangerous” is a pleasant throwback to an early/mid-90’s style Death Row track. “Gangsta” and “I Ain’t for the Games” are both handled by Ric Roc, with the former on more of a Daz Dillinger vibe while the latter is surprisingly devoid of hard bumps and feels a bit like Roc phoned it in. Other notable beats include the bouncy J Classic track “Cali Love Pt. 3” and WCM Beats work on the synth funk of “My Roller’s” and the lyrically and musically Bone Thugs-esque “Say Bout Me.”

In fact it’s the music that turns out to be the most notable part of “Gang Affiliated.” With C-Bo and Killa Tay acting as the glue that holds this group together, the lyrical content never descends into total whackness. The problem is that by having to hold it down for the young blood and deal with a never ending litany of guest stars (from Gotti to Phatts Bossi to Richie Rich to Fed-X to Yukmouth and more), the “Gang” never really seems to establish their own identity. The lyrics end up being your typical selection of reality rap – getting money, ducking feds, having thangs and macking on dimepieces. The success of a group should always come as a result of the sum being greater than the whole of it’s parts, but the individual parts should at least add up to something to begin with. With no one rapper in the group saying anything distinctive or attention grabbing, the whole thing blends together into a West coast puree that’s inoffensive but simultaneously bland.

It’s well known that Bo and Tay can rock shit on their own solo albums, so whether fair or not it’s the up-and-comers 151 and Lil’ Cyco who take the blame for this album’s mediocrity. Perhaps they should have been a little more established in the California gangsta rap scene before trying to form a rap supergroup, because their talents fail to shine through on “Gang Affiliated.” While hardcore fans of Bay area and West coast hip-hop sound and style will probably want to own this one, particularly for the more experienced half of the foursome, more casual listeners will find they didn’t really miss much by not picking this one up. The concept had some potential and promise, but the execution was lacking. Even marketed as a C-Bo and Killa Tay album with 151 and Lil’ Cyco as guest stars, this album would still not feature enough of the former to be doper or enough beatwise to clinch a title. Strike the lineup and try again with more veterans on the team to get the win. Amusingly enough, the website advertised for their label on the album was under construction at the time of this review – maybe the group should be too.