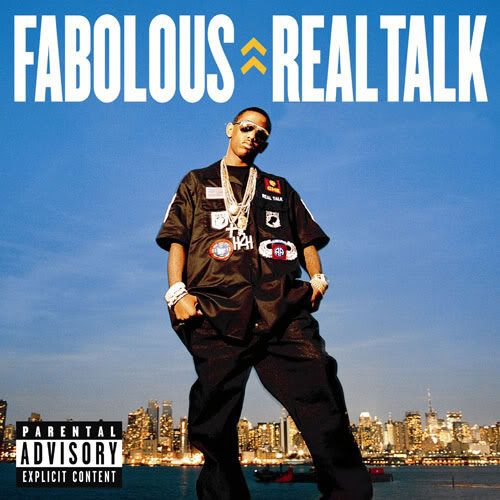 One of the hottest things about the new Fabolous album “Real Talk” may be the “Exodus” intro. Biblically speaking the chapter of Exodus comes after Genesis, but literally speaking an exodus is a mass departure of people on a great journey. You can interpret the meaning both ways – Fabolous believes he’s what comes next, and believes he can take you on a trip with his words. Ironically though he’s not the one who opens the journey on “Exodus,” but rather a spoken word poet named Black Ice whose style and voice are reminiscent of Saul Williams in all the right ways:

“See there’s no money in good health, so they need you to be sick wit it
Ill content and delivery, niggaz this nation thrives off misery
Nigga so if you ain’t tryin to let your hard times increase my wealth
Nigga keep that progressive shit to yourself
This, is the business of buying souls
And we only fuck with those who trying to sell ’em
You see they may see me as an adversary cause they know
I’m trying to tell ’em about the forest of artists who grow – only to meet industry axes
How they take a nigga dreams and write ’em off in they taxes
Contracts is confusing, but don’t worry, they’ll appoint a lawyer for you
Whore you, loan you funds to fuck yo’ soul
Make you pay it all back and still maintain control of yo’ stroll
yo’ tracks, and yo’ hot ass slow-flow
They’ll keep you lookin good and all that but no dough
You see when they get a bitch, they GOT a bitch”

Black Ice’s “Exodus” ranks among the most provocative rap album intros of all time, and provocative as in THOUGHT PROVOKING. Those who think the music industry is an easy ticket to riches and a glamorous life would do well to heed his words. It’s funny though how Fabolous may epitomize some of the very ills of this business. One occasionally catches a glimpse that Fabolous MAY be more than the bling bling’n Moet drinking MC he appears to be, but more often than not his music is as pop as a sugary soda. There’s nothing wrong with a sweet drink every now and then, but if that’s all you ever swill you end up with a mouth full of cavities and a root canal or two (and on that I speak from painful personal experience). On the other hand you can’t exactly shove milk in someone’s face and force them to drink it. Life is about striking a balance between bad and good, materialism and spiritualism, the harmony of yin and yang. One doesn’t even need to expect Fabolous to provide the balance himself. After a can of his fizzy pop music you can find your own nourishment from other hip-hop artists and keep things all in check.

First though, one needs to have the stomach to swallow seventy-five minutes of Fabolous “Real Talk.” If you’re going to make the mixture sweet, there’s no sense in going halfway. Fabolous might seem to offer some Florida concentrate from time to time, but for the most part he’s unadulterated fountain drink. The flavor all depends on how evenly the syrup and carbonation are mixed with the water before it comes out the tap. To provide flavor the right amount of swwet beats must be applied from the right producers for each serving. You can find the Neptunes making things tasty on “Tit 4 Tat” or the super smooth “Young & Sexy”:

“I’m so VIP, and Notorious for doing it B.I.G. – girrrl
You ain’t gotta see ID, I’m a rich young man
Clean button up wit the rich young pants
Out of you young ladies, which one can – do it to the beat y’all
Young niggaz get funny, just to get a name
So you know I came with the heat y’all!”

Or you can taste a sweet dark flavor to the Just Blaze sounds of “It’s Alright” or “Breathe”:

“Yo these niggaz can’t breathe when I come through, hum too
Some shoes, gotta be 20 man
It’s not even funny they can’t BREATHE
The choke holds too tight
The left looks too right
You know what? You right
These bitches can’t BREATHE”

Or you can even dip into some kosher delicacies from the self described “Tuff Jew” Scott Storch on “Round & Round” or “Ghetto”:

“There’s some chicks wit boyfriends that are uptight now
Cause they know the big ‘dog’ had the ‘pups’ like wow
I’m stuck in my city ways
Heading over seas wit a zip of New York City’s haze
You rats can keep runnin through your city’s maze
Until you get sprayed with the pesticide
I know you in that hole, you best to hide
Like the rest who tried, who went and testified”

There’s plenty of good taste to go around though, from Hotrunner’s pounding title track to the Flame Throwers using Grover Washington Jr.’s “I Can’t Help It” as the backdrop for “Baby,” to my personal favorite “smooth groove” of the whole album – J.R.’s work on “Can You Hear Me”:

“But you kept a closed nose when it came to those hoes
And I’m your nigga so I tried to smell ’em wrong for ya
Wasn’t there to take the fo’-fo’ loss for ya
But if you hear me, I dedicate this song for ya
He was setup in a stick up by a girl he used to pick up
on the upper west side, I used to help him chop a brick up
They found him in his pickup, pants down and dick up
Leanin – with one in his head and one in his chest One of the best at this husslin’ shit
But his downfall was that he put his trust in a bitch and it’s fucked up”

The latter shows the most surprising thing about this album. Fabolous’ smooth monotone flow already provided a uniform measure of carbonation, but he also added just the right bit of vitamin maturity to his rap in places to make his “Real Talk” have a carbonated kick. I’m used to finding my own antidote to how excessive Fab’s fructose can be, but in this case the hard truths he occasionally lets slide into his fabulous life actually make “Real Talk” that much more refreshing. I’m not yet prepared to say Fabolous is DA TRUTH or that his rhyme writing has put him into echelons anywhere near the all-time greats, but he’s come a long way since his “Ghetto Fabolous” days. You may find “Real Talk” a refreshing change of pace too.