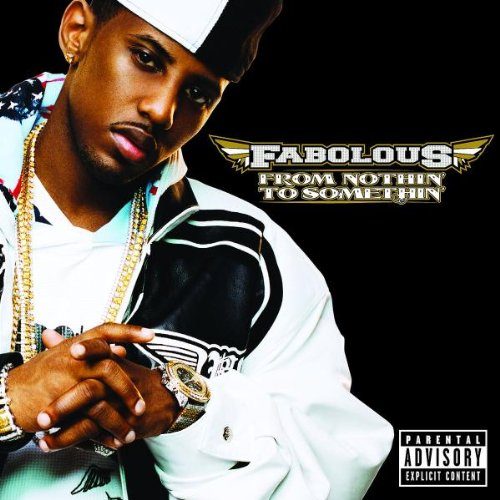 Fabolous :: From Nothin’ to Somethin’

John Jackson b.k.a. Fabolous may have a point. We’re all living in a materialistic world where we’re taught a flawed set of values: to have is better than to have-not, charity is good but greed is better, it’s okay to get ahead even if you have to step on your fellow man along the way, et cetera. These are values that debase our society and demean us as human beings, but to blame the dollar for causing all of these ills is false. Money won’t buy you the TRUE happiness that comes from peace of mind, love of self, family and community, but it’s hard to have peace of mind without a roof over your head or raise a family without the greenbacks to buy food with. Money can therefore be a means to an end, a down payment on finding your happiness, a way to put together your master plan with a grand and build self-sustaining success for the long term. There’s no shame in the hustle to get a little scratch, we all gotta live.

Fabolous has come up the hard way “From Nothin’ to Somethin’,” having to pull himself up by the bootstraps from his Brooklyn background to get where he is today. Some might have assumed once Fabolous got his first album in stores nationally that his tribulations were over when in fact they were only just beginning. Neither Elektra or Atlantic Records understood how to promote the monotone voiced rapper with the suave flow, and his only album to go platinum to date is 2003’s “Street Dreams.” Despite being signed to DJ Clue’s own Desert Storm imprint there was little the DJ could do for the rapper other than continue to feature him on mixtapes and compilations. Fabolous has had to continually juggle to balance his street credibility against his pop crossover potential, and on “From Nothin’ to Somethin'” he seems to have achieved that ideal middle ground. Take the single “Diamonds” for example:

“You think they like me now, wait until the light hit me
I bet the house somebody girl spend the night with me
They gotta love it, if not then I guess they haters
This kind of necklace I turn on the investigators
And they’ll ain’t got one problem with this
Squareface watch look like Spongebob on the wrist […]
Your boy got the drug money we be stackin on
Lot of carats, not the ones Bugs Bunny snackin on”

Fabolous has it down pat at this point. Even though his flow borders on banal at times his use of humor and punchlines is what sets Fab apart and makes his personality a rap success. By comparison guest star Young Jeezy on “Diamonds” has a more charismatic delivery but I can’t remember a single thing he said and wouldn’t care to try. Top flight guest starts abound on the LP though, from Akon on “Change Up” to T-Pain on “Baby Don’t Go” to Jay-Z on “Brooklyn” just to name a few. Nearly every track has a guest artist of some sort and it’s another credit to Fabolous that he brings in the best of the best to help change up his flow and keep the topic matter a little mo’ diverse.

There are plenty of surefire chart hits on “From Nothin’ to Somethin’,” and I strongly suspect “Make Me Better” featuring Ne-Yo and “Gangsta Don’t Play” featuring Junior Reid will be chart toppers. Fabolous doesn’t cash in his hardcore status though as tracks like “Joke’s On You” featuring Pusha T from Clipse and “I’m the Man” featuring Red Cafe will keep heads bouncing from New York to Virginia and all points West. With “From Nothin’ to Somethin'” Fabolous shows himself to be a matured hip-hop artist who has learned the value of trusting his own instincts and knowing that he doesn’t have to “Change Up” to be a success, or as he puts it in his own words:

“I make the money, but don’t let it make me
So even if I go broke nigga you couldn’t break me
Watch how long it take me to jump back on my feet
Peep, quick is when the barrels jump back on the heat
Y’all don’t wanna see me jump back in the street
So be happy that I rock them slumped back in the seats
Being broke is a joke, I never found it funny
That’s why I count my blessings as much as I count my money”