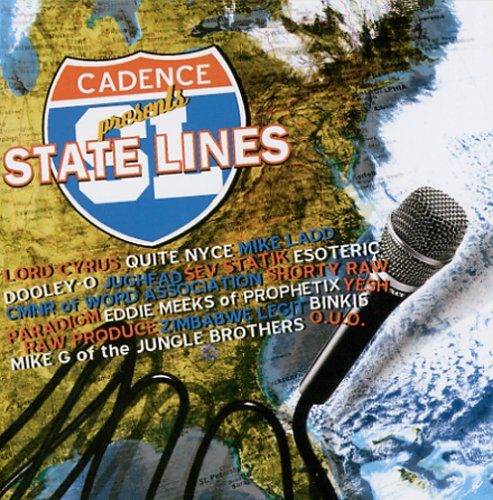 Cadence makes some seriously nice beats, crafting some of the coolest uptempo production I have heard. His musical roots can be traced back to his upbringing in Cambridge, as he crafts much of his work based on old-school hip-hop ideals. There are traces of mostly everything, but what he appears to gravitate towards that jazz the Tribe had. On his “State Lines” album, he raps on several songs, but throughout the underground star-studded tracklisting, his production holds everything together. The emcees are plenty worthy, but for the on the album’s highlights, they can’t outshine the marvelous sounds of Cadence’s studio work.

The opener is titled “Take the Time (Cadence’s Choice).” Yesh and Cadence provide the vocals, but the song comes alive during the hook, during which Cadence inserts a splendidly raw trumpet loop. The same is true for the following “It’s Only Right.” Both are good songs with nice, understated beats, but the horns lift each track to an entirely new level. Cadence clearly has an ear for this type of thing. He has built quite a reputation crafting this type of music, and for the most part, his guests back him up admirably.

Following the smooth beginning, “State Lines” hits a few bumps. “We Ain’t Singing” features Cadence venturing away from his proven formula, and the result is a disjointed production with uncomfortable horn stabs. Similarly, “Deep Freeze” has a mediocre and altogether dull song structure, which ruins Cadence and Esoteric’s wonderful concept rhymes. With a smoother, funkier one of Cadence’s works, this track would have been a killer. “The Sky Is Falling” is a perfect example of this, with a wonderfully catchy beat and Sev Statik’s offbeat rhymes. The minimalist blips in the background morph into swirling samples that complete the already excellent song. “Hard” with Jax and Flux is another success. The piano loop and strings are a hip-hop clichÃ©, but Cadence makes it work. After all, this overused production style is overused because it mostly works.

Unfortunately, the title track isn’t nearly as nice as it should have been. Cadence gets Mike G. of the Jungle Brothers to rhyme alongside him, but instead of being a great moment, “State Lines” is simply a nice cut, and is caught up in the mix of the album. A couple of other songs are unnecessary as well. They sound fine, but up against some of the beauty on the rest of the record, a couple of tracks could have been avoided, especially considering the lengthy tracklisting. A few of the guests struggle to distinguish themselves as well. A tighter album, or even an EP, would play much more smoothly than “State Lines” as it stands.

Nearly every rap album has throwaway tracks, though, so it is tough to fault Cadence for a few. “State Lines” would have been great if a few cuts had been made, but there is plenty of worthy material here. Cadence crafts several seriously beautiful old-school jazzy beats, and despite a few slips, is a nice emcee as well. Since the guest list is lengthy, the one constant is Cadence’s musical work. Plenty of underground stalwarts should be knocking on his door after hearing what he’s capable of. With a little more care, this one would have been essential.