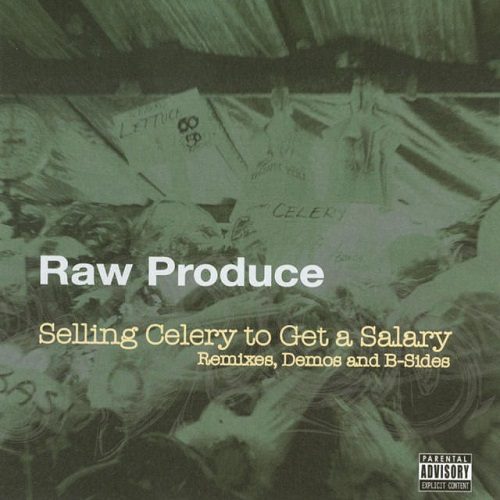 Raw Produce :: Selling Celery to Get a Salary – Remixes, Demos and B-Sides

An album full of “remixes, demos, and B-Sides” doesn’t sound all that appealing if you don’t know much about who made the original tracks. It must be a good sign though that the artist’s original recordings must have been popular enough to warrant the releasing of what we should assume are inferior tracks. Of course just because I haven’t heard about Raw Produce doesn’t mean they are unknown. The group consists of Cadence and Pitch. I have no clue who Pitch is, but I’ve heard Cadence’s name float around on the “underground” and have surmised he’s a semi-popular emcee. While “Selling Celery to Get a Salary” is probably not the best introduction to either Pitch or Cadence, it’s still a decent collection of tracks especially if you don’t mind some old school vibes.

The collection starts out with “Sink or Swim,” originally recorded in 1992 and it shows. That’s not necessarily a bad thing as the track is still musically pleasing after 14 years. The beat sounds so good it could have easily been a hit back in 1992, which is even more impressive given the fact the liner notes say Raw Produce produced the track. Surprisingly, all of the demo tracks from 1992 are very solid. “Tried and True” relates the crew’s dreams and voyage to become rappers and features a beautiful arrangement of strings. “The Taker” is a hilarious and cautionary tale about friends who only take and never contribute. Once again the beat is dope, consisting of a playful and upbeat sample and fat brassy break. “Green Is The Color” is the least impressive of the tracks but the crew still sounds fresh and shows much potential.

At this point it’s painfully obvious that Raw Produce is a talented group and if they’ve been around since 1992 I’ve been sleeping in a major way for over a decade. After ingesting what should be the worst of the tracks in the early demos, there are high expectations for the more recent tracks and for the most part the crew doesn’t disappoint. “State of the Art (Remix)” is probably the first track most heads will hit up since it features 7L and Esoteric and Akrobatik. The beat falls a bit on the simple side, but it at least gives the dope featured emcees a chance to shine. “Second Hand Smoke” is another recent track where the crew uses the concept of second hand smoke to represent those things that try to get in our way and mess up our lives. After these two tracks it becomes difficult to surmise when exactly some of the tracks were recorded as many feature release dates only and sound a bit dated. Both versions of “Breathe Deep” feature underwhelming beats that don’t seem to match the mood of the track, though the beat on the Omid remix would be dope on its own. “Feeling of Now” also features a disappointing beat but the flows on the track sound more updated and feature some decent lines like “I’m looking at the world top-down like a convertible.”

Being a collection of material not deemed worthy of release on major releases, it’s only natural that a lot of the songs aren’t all that great. The crew shows brilliant moments, especially on tracks like “Make a Mark” where they speak on trying to impact the rap game. But for every dope moment there are tracks like “The Wack MC” that feature beats that don’t match the mood of the track, outdated and unoriginal concepts, and less than impressive rhymes. Despite the less than stellar tracks, Raw Produce delivers a product that does more than other similar collections. Long time fans will surely be satisfied to hear how the group has evolved and experience some older gems that probably should have found their way on a proper release by now. Even though this release would probably not be the first to recommend if you are new to the crew, any hip-hop fan would still hear enough dope material and potential to be motivated to peep the crew further. Tracks like “Sink or Swim” and “Tried and True” are sure to make their way to your peep list no matter how old they are. Overall, the crew shows that they had plenty of skills behind the boards and on the mic back in the day and have only gotten better with age.