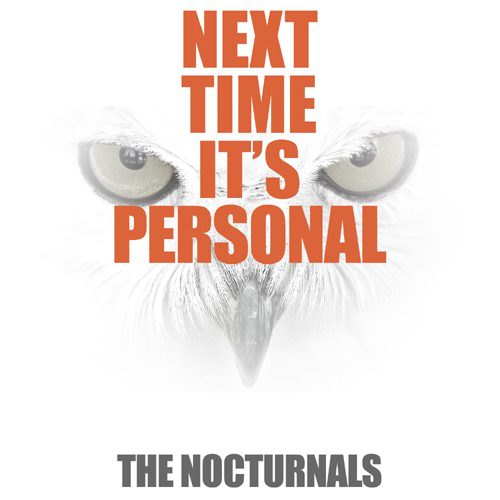 The Nocturnals :: Next Time It’s Personal

“I need some cash/my parents say I shouldn’t rap for it/I feel like I have a natural knack for it.”

And so begins “Next Time It’s Personal”, the debut LP from The Nocturnals, a rapper-producer collab between newcomer MC Rota and nearly newcomer The Letter N. Rappers are known for their bravado and bold self-assertions, and Rota claiming to have “a natural knack” for rapping (only nine seconds into his first, under-the-underground album, no less) plays as an intriguing aw-shucks hip-hop boast. It is also the challenge he must live up to, the question that will drive our reception of his performance over 13 tracks. With no guests and few hooks, there is little for Rota to hide behind on “Next Time It’s Personal”; the Letter N’s canvas is visible but rarely out front, so we spend the record ensnared in Rota’s stream-of-conscious verses, debating his “natural knack.” Though he doesn’t quite pull it off over the entire 13 song set, there are enough flickers of enjoyment in this debut to look forward to Rota’s next offering.

“Next Time It’s Personal” opens with three songs of medium tempo and urgency; the record does not come into its own until “Slow 2 B Leavin.” Rota’s background as a spoken word artist plays well on this track, along with the haunting refrain on “Everlasting Love” in which the narrator discusses his love with an android: “But you’ll never die/but neither will I/ No, I’m just spitting game/ Because one day I’ll die changing while you’ll stay the same.” On those songs of medium tempo, Rota seems to be trying his damndest to enunciate and hit every syllable. The flow isn’t bad, merely labored and deliberate. In short, he sounds for much of the album like the beginner he is.

The startling exception comes in the album’s middle, on the track “Where I Dream To Be, Briefly.” This is The Letter N’s poppiest production, and it brings out a more natural delivery from Rota, who exhibits a real comfort for a faster spitting. The spoken word tracks work because he’s not rapping, and “Where I Dream” works because he’s not thinking about rapping. (Curiously, toward the end of the first verse of “Where I Dream,” he begins rapping with a lisp, unheard anywhere else on the record. Not sure what to make of that, but I enjoyed it as it sounded finally like a rapper just riding the beat.)

While the actual rapping is hit and miss (or, perhaps, miss and hit and miss), the lyrics are sharp, painful, funny, observant, and occasionally twisted. Rota’s voice resembles El-P at times, though that is the end of the similarities. This is dweeb rap, and I mean that complimentary. If Rivers Cuomo was an MC, I suspect his lyrics would sound something like this. What Rota most definitely has a natural knack for is establishing a different kind of hip-hop persona, a voice that seems to live outside of the hip-hop sphere. Rota “keeps it real” all right: on “Diamonds,” he raps about needing money “so I can pay rent/ And not go back to grazing from my parents’ basement.” And “Where I Dream” paints one of the most embarrassingly humorous “guy who can’t talk to females” songs I can think of:

“Can I buy you a drink please?,” he fires off. “Will that lessen your resistance/ I know that you’re a Christian/ But please loosen your mittens/ I just want to pet some kittens/ Before this night hits intermission.” And later: “Please sleep with me/ I swear, you don’t have to give back/ Just take off your knick-knacks/ I’ll pop in a tic-tac/ You tip back/ I’ll lick lap/ With lips chappedâ€¦” Yikes. Those are details you don’t find in every song.

The catch is that “this is all inside my mind.” While many musicians present their coolest hypothetical self for their record persona, Rota seems more interested illuminating the cool guy trapped within the coward, highlighting the words and actions that will never break free from their intimidated shell. It might not always be great rapping, but at least it’s funny, honest, and always works as poetry.

Under these words is steady production from The Letter N, backgrounds that are contemplatively head-bopping, if there is such a thing. Perhaps the best compliment that can be bestowed upon the production on “Next Time It’s Personal” is this: tracks sound crafted specifically for this rapper and not a different one. This is different music than The Letter N (now known as Lucca) provides for the rapper E-Train. Those are more consciously pop-oriented, matching Train’s pop sensibilities. Here, Letter N delivers a background closer to what J Dilla gave Common on “Like Water For Chocolate” and away from what Kanye gave Common on “Be.”

“Next Time It’s Personal” is not for all hip-hop fans. But then, nothing worth while ever is. After their four-track EP under the name The Scribblers, The Nocturnals reveal true growth on this album. They’re on to something: this writer for one is definitely looking forward to next time.

The Nocturnals :: Next Time It's Personal
6Overall Score
Music6
Lyrics6