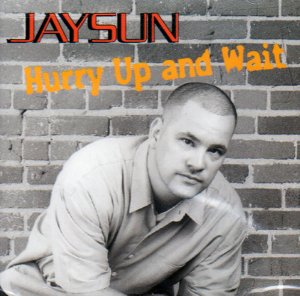 Jaysun :: Hurry Up and Wait

Boricuas have had a big time impact on Hip-Hop, especially considering the relatively small number of Puerto-Rican artists that make it big. From Crazy Legs and Tony Touch to Fat Joe and Big Pun, the 51st “state” has shown that they can contribute to all facets of Hip-Hop culture. With such a legacy behind him, Jaysun faces no small task in becoming the next big Boricua in the game. His debut album “Hurry Up and Wait” shows potential throughout but ultimately remains in the shadows of it’s predecessors.

Being the second release from Doomzday that has come across my desk, the first trend I’ve noticed is that it seems the label has an old school vibe to its music. DJ C4’s beats tend to invoke the spirit of early 90’s East Coast hip-hop with mellow funky loops and simple drums. On top of that, Jaysun’s style seems to fit right in with that particular time period. The best description would be a mix of the energy Fat Joe had early in his career and the funky flow of Sondoobie. None of this is detrimental to the music, in fact it’s refreshing to hear someone take it back to what was arguably Hip-Hop’s best era.

With 12 tracks, not counting the intro and outro, Jaysun avoids dropping the ball too often. “All I Can Get” is menacing track that finds Jaysun warning all other emcees to beware, a sharp contrast to the usual physical threats being dished out in Hip-Hop today. “Down With Me” could be the best track on the CD purely based on the beat and hook. The beat is simple, using a repetitive electronic-sounding sample, but when put together with Jaysun’s semi-sung hook the results are a track that will have you bobbing your head and singing along. “Stop, Look, and Listen” is another noteworthy track that addresses some of the social ills our society faces.

Outside of 4-5 standout tracks, the rest of the album seems to linger between being average and excelling. DJ C4’s beats, though simple, tend to hold up well through out the CD. They provide enough musically for Jaysun to flow over, but at times they sound a bit too stripped down and could be helped by more musical variation and incorporation of more complex instrumentation. The only beat that completely misses the mark was produced by Jaysun himself on “One For Da Headz.” The major problem with the beat is an irritatingly high-pitched beep that repeats throughout, it makes the song almost impossible to listen to at anything other than low levels. Lyrically, Jaysun’s style lends itself to simple but effective verses liberally sprinkled with metaphors and similes. In other words, one shouldn’t expect the tongue-twisting, complex verbal assaults produced by the likes of Pun, Em, or even Luda. On the same note, old school heads dropped some of the illest Hip-Hop verses of all-time, and Jaysun’s simpler approach doesn’t detract from his ability to get his point across. Content-wise, Jaysun isn’t caught up in Hip-Hop bling, or any other trend, instead addressing his life, the problems he sees around him, and setting aside enough time to let others know he’s the illest on the mic. It truly captures the essence of East Coast rap back in the day.

“Hurry Up and Wait” has many things going for it, but in the end the album doesn’t do enough to pull Jaysun from the pack of hungry emcees all waiting to break big. Jaysun’s style is almost too old school and his lyrics do little to compensate for his average delivery. If something like this were released 10 years ago it might have created a buzz, but in today’s rap game it is ultimately just an average release from an artist with potential.