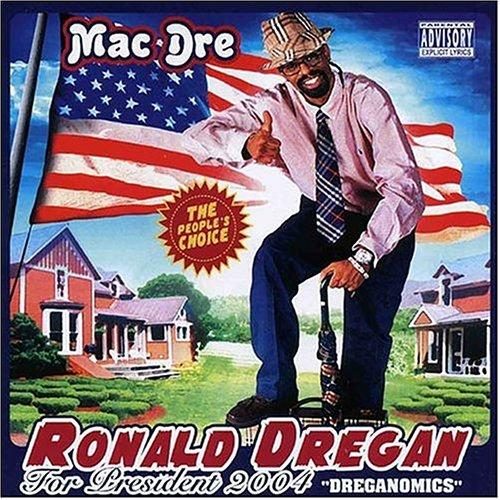 There’s no doubt that Mac Dre meant the words he uttered over 10 years ago. And though he was taken from us through an act of senseless violence, in his lifetime Dre managed to release 4 or 5 times the amount of material the average emcee releases during his or her career. In a way Dre came through with his promise as he left his fans with enough material to last a lifetime. Ironically, one of his last releases, “Ronald Dregan,” showed that Dre may have been on his way to shedding his image of being “too hard for the fuckin’ radio,” and in a good way too.

Why Mac Dre remained too hard for the radio outside of Cali has always been a mystery to long time fans. It was probably a combination of Dre’s hard lyrics and the fact that Bay Area mob music tends to be an acquired taste, but with his later releases Dre was actually doing a lot to transcend the murky bass and funk of the Bay Area. “Ronald Dregan” represents a perfect example as he mixes plenty of catchy dance tracks with his usual tales of street life and mackin’.

“Fellin’ Myself” starts things off right as Dre spits his usual witty lines:

“I’m out of this world, not your run of the mill’n
My name is fur I’m the owner of the building
I’m a stoner and I’m chillin with two bitches like Jack
I pimps and I mac drive a Benz and a ‘lac
man I’ve been in the back wit the groupies and the stars
I’ve been out front with the thugs in the cars
I’ve been in the yard with the Mexican mafia
And I only run with niggaz that’ll kill and die for ya
I’m popular, I’m a rap star
but I live like a rock star running from the cop cars
I drop bars wit slaps that Knock hard
and I charge with this dick extra large
I’m sicker than SARS higher than Mars
and I treat my bitch like an ATM card
[…]
I’m a Westcoast Bad Boy
I represent it
Dre that’s a bad tune is it rented
hardy har har very funny
You don’t hear my tummy
I gets my money
My stomach ain’t growlin’
I’m stylin’ and wylin’ drink Vodka straight fuck the Long Island
I want my own Island bet you I’m a get it
I switch hit and play with both mitts
I pack a 4-5th I’m after your bitch
he ain’t doing it right she’s after your scritch
And I’m after hers with these macking words nerd
I thought squares stayed sharp
You’re nothing but a mark in a bucket Sky Lark
I’m playing my part, I’m Mr. Furley
Quit interrupting I’m talkin to your gurly”

Sean T provides the perfect playful beat to go with Dre’s laid back style as the fast-paced bass line, high-pitched vocal sample, and almost cartoon-like synths mix well to make a catchy track. Other tracks that follow this almost dance-like approach are “Jump It” and “That’s Wusup.” “Jump It” finds Dre asking everyone to do the “Thizzle-Wiggle” over another up-tempo track that uses an electric guitar to provide the melody. “That’s Wusup” is a straight club track that uses a menacing bass riff and a subtle trumpet sample to give the track its appeal.

Outside of the dance/club tracks Dre also provided a few more laid-back tracks that could blend in well on any radio station. “Since â€˜84” finds Dre reminiscing about his days in the game, rap and otherwise, over a mellow guitar-driven track. “Get Stupid (Remix)” is Mac Dre’s own way of telling you to get ignorant and let go, a theme that’s been in Dre’s music since day one. This track also uses a guitar sample, only this time the guitar sounds a little more pop as opposed to the hard-rock riffs used on other tracks.

Besides what would be Dre’s radio friendly tracks, the rest of the album is filled with equally solid tracks. “Fa My Niggaz” takes it back to Dre’s street roots as he shouts out his crew and his neighborhood. The beat is comprised of a surprisingly soft piano melody with strings to compliment it. This mellow approach doesn’t detract from the menacing feel of the track, especially the hook where one of Dre’s comrades spits:

“Go to sleep with your face to my knuckles
I’m swinging belts catching niggas with the buckle
Buckle up and move safely, cuz I’m hot-headed
With no patience, damn ready to scrape shit
Go ahead and call me neo from the matrix
I bust heads and keep em running like Asics
I’m a original, I lay it and you trace it
It’s pitiful cuz most of ya’ll stuck to the basics”

“On The Run” is another street track where Dre shows that rap and rock can mix and mix well.

There are really no bad songs on this 12 track release. “Witme??” and “Me DaMac” are classic Dre tracks as he displays his best mackin’ skills over upbeat funk. “Dreganomics” is a tight track explaining Dre’s philosophy in life. “2 Night” is almost a Southern crunk effort with its bass heavy beat but Dre manages to put his own twist on the track. Sean T makes another appearance on “Don’t Snitch” where he provides another dope beat for Dre to ride on.

On “Ronald Dregan” Mac Dre was at the top of his lyrical game as well as showcasing just as well he had mastered his flow over the years. Production-wise Dre put together a very solid effort especially considering the fact that he had 7 different producers. Though the guitar might be the one common factor on most of the tracks, the production is varied enough in style that you don’t notice it. With albums like “Ronald Dregan” Mac Dre was close to breaking out of his position as a local legend, and with good reason.