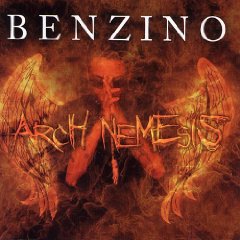 Saying I’m a fan of Benzino’s would be the biggest lie since George “Dubya” Bush said that Saddam Hussein had weapons of mass destruction in Iraq. In fact I’ve personally disliked his stupid ass for a decade running now. From ruining The Source magazine behind the scenes to lyrical diss tracks on Eminem that are only funny for being so BAD, there hasn’t been much about Benzino for me to like. Inexplicably though the career of Benzino never seems to die. He’s like a nasty communicable disease that spreads throughout hip-hop, and just when you think the art and culture have been innoculated against him a new strain pops up and we all get sick again. Perhaps his homeboy David Mays is the one who keeps propping him up, either by putting at least one Benzino track on every “Hip Hop Hits” CD from The Source (whether they are hits or not is certainly questionable) or perhaps by funneling money into his imprint ZNO Records when no reputable label in the US today would put their own money on the line for him.

Why tell you all of these facts in advance? Because unlike the staff at The Source, I’m not paid off to say nice things about the man. As a man of integrity I’d rather let you know my bias up front, so you can judge whether this review is fair or not – and I’ll be the first to say it’s probably not. Truth should be an essential part of record reviews, and revealing my bias right here and now makes this Benzino review more truthful than any “five mics” he’ll get in the pages of his own publication, from a group of people who fear for their jobs if they said how they really felt about him. Nobody’s going to fire me for speaking the truth here though, and I’m not beholden to any advertiser who is plugging Benzino’s album on this website to give it good press and make sure the bills get paid. While I probably can’t be fair about a man I personally loathe, I’ll endeavor to try anyway and if I fail at least you’ll know that unlike The Source nobody at RapReviews.com will pull the wool over your eyes and try to claim impartiality where none exists.

With that out of the way, here are possibly the two most complimentary things I can say about “Arch Nemesis”: the beats are pretty good, and he does have a few nice guests on some of the tracks. Of course those two things seem to be true about any Benzino album. There are (unfounded and unproven) allegations that Benzino only gets his guests because they don’t want retaliation with a negative review in The Source, but that’s for an investigative journalist and can’t really factor into this review. Instead credit goes where it’s due and there’s nothing wrong with hearing Scarface on “What’s Really Good,” Lil Jon on “Dat’s How it Goes” or 2Pac and Freddie Foxxx on “Trying to Make it Through.” Wait a minute, Tupac? Obviously this is more material he recorded before his untimely demise, mixed into this Reefa produced song. While most artists these days are more than happy to pay for a snippet of his rhymes to create their own “featuring 2Pac” song, Benzino may have a deeper motive here. Since on the album he proclaims himself the “Arch Nemesis” of Eminem and even dedicates a song to him on “Look Into My Eyes,” doing a 2Pac track may in fact be a jab at him for his involvement in “Tupac Resurrection” and the fact he produced all of “Loyal to the Game” for gratis. In short, ‘Zino is saying if Em can do it, so can I. At some point someone’s going to have to question whether two people fighting to win the loyalty of 2Pac fans long after he died really pays tribute to his legacy at all, as opposed to tarnishing it. The song’s nice though, other than Benzino trying to claim he was down with Makaveli not to mention the ridiculous assertion he is one of “the realest of all time” – neither of which can be proved.

The music really will impress you at times given half a chance, even in unexpected places like the “Ride” skit, where Hangmen 3 provide some really smooth notes you could cruise to that someone definitely should have rapped over. I’m also digging their work on “Not Me” featuring Miss Lilli, the bouncy old school feel of “World Famous,” even the sudden switches between mournful pianos and hard rock guitar on the bonus track “Last Days Calling” are fresh as hell. It’s a shame Hangmen 3 aren’t kept busy making tracks for more worthy hip-hop artists. They do better on the “Intro” alone than some producers can create on an entire album. On the other hand Reefa and Benzino should have been PIMP-SLAPPED for blatantly ripping off Nelly’s “Heart of a Champion” on the song “It’s Nuthin'” like nobody would notice. I NOTICED. Shame on you both. And ‘Zino, it’s about time to stop shouting out Almighty RSO, their name’s as dead as the cops they used to kill lyrically to get controversy and a few more sales. And taking yet more potshots at Eminem seems like another attempt to make controversy and push units of “Arch Nemesis.” To be honest if all the vocals could have been stripped off Benzino’s CD, I would have enjoyed it a lot more. His obvious ethical and moral failings aside, he’s not even that terrible as an MC. Honestly though, I wish he’d shut up and go away for good, and I feel queasy for what little props I do give his album in the review. I don’t in all honesty recommend “Arch Nemesis” but if you did buy it without knowing what a shit-sucking piece of scum he is you’d probably say “it’s aight.” Take that for what it’s worth.