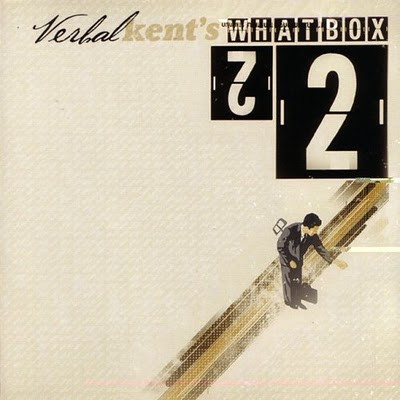 Common Sense, Twista, and Kanye West. How many more rappers can folks outside of the Midwest name from Chicagoâ€”particularly on the underground scene? Surprisingly, Chi-town has been sorely underrepresented while cities like Detroit and St. Louis have blown up due to their respective golden-children, Eminem and Nelly (not to mention those artists force-feeding the public their own crews).

Verbal Kent, also known as a member of The Organic Mind Unit, represents the Chicago underground with the utmost pride. With a deep, articulate voice, not unlike Evidence of Dilated Peoples, Verbal Kent offers “What Box” as an opportunity to carve out his niche as a leader in Chicago’s underground rap scene.

Most of the important elements of a good album are here. Kaz-1 laces the majority of the beats superbly, most of which boom with an ominous touch of vintage Mobb Deep street corner shit. Thematically, Kent varies little from the tried-and-true underground staples of battling and consciousness, the former often times flaunted with a sharp wit and impressive sense of humor. There are only a few, well-chosen guest spots (most notably, Wordsworth and One Man Army)â€”a wise choice as Verbal Kent is more than capable of holding his own lyrically.

Unfortunately, Verbal Kent is largely unable to readily help distinguish “What Box” from comparable releases in what has become a booming rap market over the last year or so. That’s not to say “What Box” isn’t an enjoyable listenâ€”it is, in fact. But, the competition these days is tough. Had it been released just five years ago, “What Box” may have made some serious noise for a largely-starved underground rap audience. But, with the lines between mainstream and underground constantly being blurred, an obstinate proclamation of love for all things backpacker such as “What Box” appeals to an ever-narrowing audience.

“What Box” is impressive enough a release to solidify Verbal Kent as a local favorite in Chicago (if he wasn’t prior to its release). And that’s fine. However, if his goals extend beyond an insular audience, then he needs to push the envelope just a bit more.