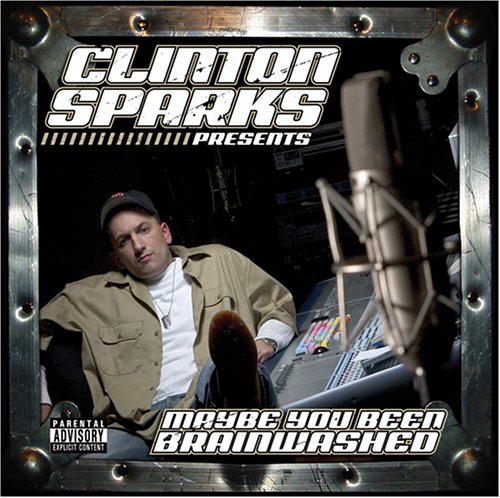 Clinton Sparks :: Maybe You Been Brainwashed

First the credentials: Clinton Sparks, famed East coast DJ who rocks four different radio stations, three with live shows every week. His catchphrase “get familiar” is known coast to coast. He produced beats for urban artists from Jaheim to Memphis Bleek. Every Thursday night from 10-11 PM EST you can hear “Smashtime” on XM satellite channel 66. In 2004 he received the “Radio DJ of the Year” award. Whether it’s in the world of mixtapes or over the air broadcasts, Sparks be wreckin shit on a level right up there with Funkmaster Flex, DJ Clue and WhooKid. He’s a big name, and he’s doing big thangs.

Now for my own perspective – until his name started showing up in the titles of a few mixes and the credits of a few tracks, I hadn’t even heard of Sparks. I didn’t get XM until last year, nor do I listen to it on Thursday nights. I’m not on the East coast so I haven’t heard his shows in Massachusetts, New York or Connecticut. I don’t know who gives out the “Radio DJ of the Year” award, but I didn’t receive any press releases about it and HIS press release was the first I had heard of it. That’s not to say Sparks isn’t a big name, but it would seem that his fame is on the rise and hasn’t necessarily peaked yet. Whenever a radio and/or mixtape DJ gets official though, it’s not long before they come out with a nationally distributed compilation CD that you can buy in any store coast to coast let alone powerhouse internet retailers likeAmazon.com

. In this case it’s the best of both worlds for Sparks – we can “get familiar” with his work while he “gets official” by pushing units at more than just a hand to hand level.

From both the PR for and the tracklisting of his album “Maybe You Been Brainwashed” it’s clear that his heavyweight status looms largest along the Eastern seaboard. To be specific, his guest list rarely moves beyond the Tri-State area. Some artists even make multiple appearances: Noreaga’s on two tracks, Mobb Deep’s on two tracks and Joe Budden is on two tracks. That’s not to say that Sparks didn’t reach out to his hip-hop brethern though. From down South in Houston, Lil’ Flip came to wreck with a song that’s already made one mixtape appearance but may get more exposure here – the Sparks produced track “Underground Legend”:

“You got it I want it I come and get it, nigga
I’m the best, you gotta admit it, nigga
I freestyle I ain’t gotta write shit nigga
What I drop you ain’t gotta like shit nigga
But it’s gon’ sell nigga, and you gon’ wanna do
a track with me, plus I got my fuckin gat with me
Three niggaz in the ‘llac with me
Got my muh’fuckin K if you thankin about jackin me
I pack my heat, I break ya neck
Catch ya at ya fuckin office and take ya check, bitch!”

And from the cold confines of Toronto, Canada comes Kardinal Offishall to flow with his patois stylee on “Hater Bug”:

“Aiyyo I used to be in love with this thing called rap
But fuckin 90 percent of these niggaz spittin is whack
So I treat it like how I met it way back in ’83
Tryin to destroy every other microphone that I see, these
lil’ peons are no man actin
like they six feet with the tight jeans saggin
Clothes lookin like bootleg Dapper Dan
from the corner of Canal, let me show you ’bout style”

Despite these ventures into other territories, there’s no question that Sparks knows his audience and sticks ruggedly to it. “Rugged” in fact describes most of the artists who appear here, who by and large are best known as heavyweights in grimy street criminal raps who mostly owe their allegiance to the boroughs of NYC. On “Okay Dun” Mobb Deep is as grimy as they come, rocking a beat that borrows heavily (and effectively) from the same “Clockwork Orange” source Cage once rocked on “Agent Orange.” Even those who heard that underground track won’t be mad at this jack:

Havoc: “I ain’t runnin even if the illest repoitoire’s mentioned
My weapons ain’t like yours, my hammers don’t wet doors
I come through blocks nigga, set your shit off
The streets and them gloves don’t, ever come off
The strong overcome the weak, accept the loss
Mami run to gangsters, she lookin at a boss
Homey front there’ll be bodies more
Cause those in my cross you gonna get it catch you in the club split it
While you drink and get up on them Jacob, your man’s weapon
AJ feel the new Mobb, your worst nightmare
Trucks wrapped in Kevlars, bitch”

As a mixtape/radio DJ Clinton Sparks is alleged to be so hot that his hands could melt vinyl into unrecognizable chunks. As a producer he’s a little more lukewarm. It’s impressive that he held down the music for almost the entirety of his national debut, with only a little additional help on keys and strings here and there. The biggest musical guest is Miri Ben-Ari playing strings on “Run This City,” but as beautiful as her playing is it can’t resurrect what is otherwise a mediocre braggadocious cut by P. Diddy with a generic “jiggyfied” beat. Sparks runs the gamut from brilliant to boring. He goes for the old school throwback sound on the heavy boom bap of “Get Down” featuring the Flipmode Squad, but recycles a siren sample that should’ve been retired for good long ago on “Let it Go” with N.O.R.E. and Nature. “Whatever it Takes” is so good it may redefine the public perception of Joe Budden, but the equally underrated Black Rob is poorly served by “Knock Em Out.”

After listening to a little over 68 minutes of “Maybe You Been Brainwashed” the end result is that one will “get familiar” with Sparks in all his positive and negative aspects. On the plus side he’s not the type of DJ to needlessly shout himself out over tracks 20 times every minute, nor repeatedly loop the first four bars of a song with a scratch in some futile attempt to prove he’s half the turntable wizard DJ Q-Bert is. On the minus side his own opinion of his beats may be a little inflated, and in the end it wouldn’t have been bad to have his mixtape enhanced by the likes of Alchemist and Primo. His love of the East coast can’t really be questioned since it’s where he lives and the audience his shows are broadcast to, but some may desire a little more variety. As mixtapes goes though this one is very acceptable – the good elements outweigh the bad and some of the exclusive on here are worth copping it for. This LP is cautiously recommended, with hope that as we get MORE familiar with Sparks, he’ll keep getting better.