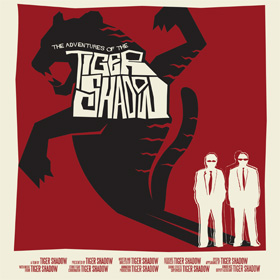 I actually thought the artist’s name was “Tiger Shady” at first due to the font used in the artwork. I actually pondered that for a couple of minutes to boot. I wondered if he was Slim Shady’s brother by a different mother of an Asian persuasion. I wondered if he’d be a cross between Jin and Miilkbone, yet an amalgamation that was ultimately greater than the sum of those parts. I pictured Tiger Shady pitching his demo to corporate executives who didn’t understand the depth of his love for hip-hop, who could only imagine him being pigeonholed into a niche they naively believed wouldn’t sell, and passing on his album – forcing him to release it himself.

Ultimately at least part of that vivid daydream was accurate, and as it turns out there’s nothing Shady about Tiger Shadow – figuratively or literally. Ripping this CD informs you that it’s an instrumental, but whoever updated that database clearly wasn’t paying attention. Tiger Shadow is an alternative hip-hop duo hailing from Leeds, a city/borough of West Yorkshire, England. Learning that made me make another assumption before listening – the lead rapper of the group would have the distinctive and commonly exported British meets West Indies flow of the UK hip-hop scene. That was also accurate – Komla MC exhibit these vocal qualities – but he’s not difficult for a yanqui to understand.

“Me and Tycho together no brainer, like jellyfish
Now that’s some ish you won’t find in my dish
Come on genie, just grant us this wish
And do it in reverse, bosh bash bish
â€¦ Switch it up to keep it fresh
We refuse to be pigeonholed, yes
Tight rhythms and rhymes we possess
I’m feeling myself no less, I confess
Strong lyrics like they bench press
Nuff critics reviews they are impressed
Don’t bother with the fancy dress
It’s gonna take a bit more time I guess”

“Oh No, Overflow!” also got one more of my imagined fantasies correct – this duo refuses to be pigeonholed. With the motto “all we need is a beat and a fat bass” the Jim Tycho and Komla MC team explore what hip-hop is on songs like “Standard Response” while simultaneously mocking the “monkey see, monkey do, play your part” culture they come from, with hopes to be a “hip-hop liberator.” They have a strong chance. There’s a hint of Cockney rhyming slang to the titles as you go through the album’s tracks with songs like “Monsoon Too Soon,” “Helter Swelter” and “Serene Trampoline” but it’s not an abused theme. There’s also a progressive futuristic feel that crosses over from the titles to the beats on songs like “Hippo Electric” and “Proof of Concept.” The more you listen to this album, the more it plays in your head like the backdrop for an AMV. I’d be surprised if it didn’t get used in a few.

“My style is not orthodox
Incredible African paradox
Half light, half dark, equinox
Too hot, too cold, just right Goldilocks
I still listen to them Yankee Doodle cowboys
Corrupting each and everyone with their loud toys
I think it’s just a victimless crime
So don’t be so harsh criticising next time”

Now comes the unfortunate part where I must be sharper in my criticism, because although I genuinely enjoy “The Adventures of the Tiger Shadow” and can see myself replaying the whole album many times in the months to come, it can’t entirely get a free pass. While Komla MC’s flow is easier to understand than some of his countrymen, that also comes at the expense of oversimplifying his rhyme pattern at times, to the point it becomes easily predictable. It’s not good to know in advance a rapper will rhyme “barrel” with “apparel” and “Bangkok” with “Woodstock.” I want to be surprised as a listener, but most of the surprises come in the production – and that’s so unconventional it’s going to be a tough sell for audiences weaned on boom bap and G-Funk. The very fact you can’t pigeonhole a song like “Helter Swelter” means a lot of the people listening to it just won’t get it, and won’t even make the attempt to.

All things considered, Tiger Shadow’s “The Adventures of Tiger Shadow” was the kind of unexpected one doesn’t often get as a reviewer when covering 20-30 albums a month. Recognizing that this isn’t the kind of hip-hop for everyone reading this review, I can at least say with a high degree of certainty that if you’re into avant garde experimental rap music, this is one adventure that you’re definitely going to want to take. Book your trip today.