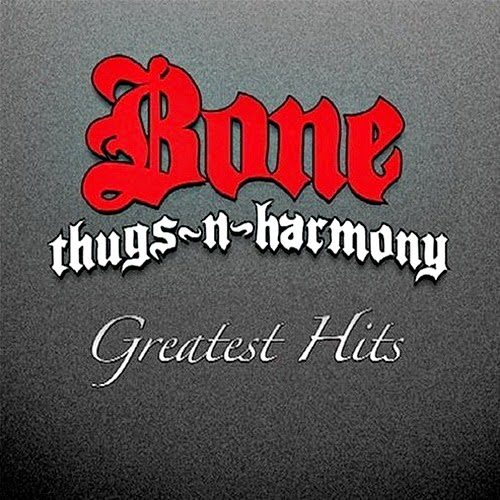 With a career spanning over 10 years, a large fanbase that has not shrunk despite their erratic history or long gaps between releases, and a loyalty rivaling Wu-Tang fans when it comes to supporting solo projects, the Bone Thugs-N-Harmony are indeed worthy of a “Greatest Hits” release. It’s not only a good time in their career for reflection and review, it may for better or worse be the final statement on their legacy as a group. Like the Wu-Tang Clan, their success as solo artists has led them to become less and less dependant on reuniting to work together. The closest they’ve come since 2002’s “Thug World Order” was tis year’s release of Layzie & Bizzy Bone’s duet album “Bone Brothers,” and although several tracks on it suggest a full reunion is possible only time will tell if they’re all willing to put aside personal and professional differences to make it happen.

For anybody familiar with their discography, most of this two-disc set will not come as a surprise. In fact the first two full length songs of disc one “Thuggish Ruggish Bone” and “Foe Tha Love of $” are their first two hits respectively from the “Creepin on Ah Come Up” EP way back in 1994, and the next song “1st of Tha Month” was the first hit from 1995’s follow-up “E 1999 Eternal.” There are some soundtrack and solo songs to be found throughout the set though that may be SLIGHTLYless familiar to Bone fans. “Shoot ‘Em Up” comes from “The Great White Hype” soundtrack. “Days of Our Livez” hails from the “Set it Off” soundtrack. Et cetera. It’s also interesting to note they are one of the few groups who can say they recorded with both 2Pac and Notorious B.I.G., and it’s no coincidence that on the first disc their songs “Thug Luv” and “Notorious Thugs” are paired back to back. It’s a testament to not only how popular the Bone Thugs are but how universal their appeal has been, from East coast to West and all around the world.

Disc two’s material is no less satisfying. Opening it with “Look Into My Eyes” from “The Art of War” really starts things off on the right note, it’s the kind of rugged musically and harmonious lyrically track that epitomizes their style and sound to a T. It’s a little ridiculous that there’s not more variety in the first three tracks though, as they all hail from this same album. With the fourth track they dip into Krayzie Bone’s “Thug Mentality” album for the song of the same name, which is appropriate since it featured all of Bone. Unfortunately the formula gets uncreative again at this point, as the next three cuts are all from “BTNH Resurrection.” It’s almost too obvious that the line-up would switch to another solo album at this point, and it does indeed with L-Burna (Layzie Bone) and “Still the Greatest.” The next two songs are from “Thug World Order.” See how it works? The formula is once again disrupted by the Mo Thugs track “Ghetto Cowboy.” At first the formula seems to have ended with Bizzy Bone’s “Thugz Cry,” but the remake of “Home” featuring Phil Collins and “Cleveland Is the City” are also both from “Thug World Order.”

Diehard Bone fans may have hoped for something a little more unique on this two disc set, especially given there have been at least two “Collection” albums of Bone tracks before this point that actually had unheard material also released by Ruthless, but this is what it is. It lives up to the “Greatest Hits” billing, they’re all here, including their smash hit “The Crossroads.” The lack of creativity in compiling them together is a little dissapointing, but it doesn’t take away from the fact that this is a solid if somewhat pedestrian showcase of Bone’s best work. A dedicated fan could just as easily have put this set together by ripping the songs and burning their own compilation, but the convenience and the amount of material here (essentially two discs for the price of one) may still make it worthwhile even to their hardcore contingent.