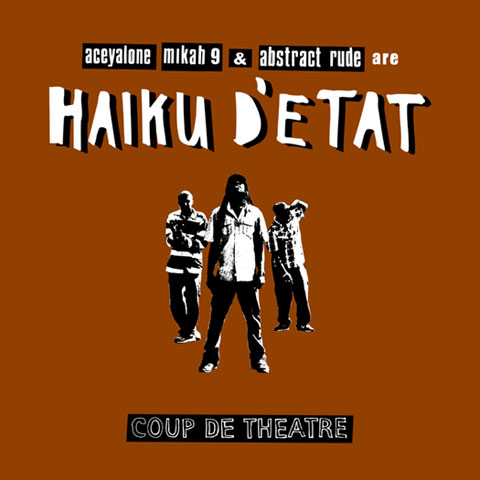 Haiku: three lines of poetry written in the form five syllables, seven syllables, and then five on the final line. Coup d’etat: violent overthrow of an existing body or government by a small group. These concepts might not seem like they could be easily merged, but a look beneath the surface reveals hidden parallels. Haiku D’Etat is a group composed of three members – Aceyalone, Mikah 9, and Abstract Rude – three lines, three MC’s. As far as overthrowing the status quo goes, the three only wield verbal violence on the microphone, but it’s still a strong challenge to the mainstream. Individually they are all recognized as lyrical mindbenders, cult favorites, legends of high brow West coast rap. One can only presume that putting three such great MC’s together in a group really would be a coup d’etat with the potential to shake hip-hop down to it’s foundations like a rupturing San Andreas fault.

The musical soundtrack to their revolution definitely sets things off on the right note. Even a normally throw away “Intro” on most albums sounds important here and builds up the to big things with a jazzy swing by DJ Drez and French vocals by Nikko. The next two songs feature the sophisticated sound of Fat Jack, including the affirmational “Mike, Aaron and Eddie” (Mikah, Abstract and Acey’s real names respectively) and the simply constructed but up-tempo and energetic “Kats.” Amusingly enough the next song is “Dogs,” which is a light hearted romp put together by Mikah 9. Mike also laces the pounding “Poetry Takeover” later in the album, proving himself as able on the track as he is on the rap. None of the other tracks are self-produced, but it’s no cause for alarm. With Fat Jack handling three other tracks with the quality of the serene and smooth “All Good Things” and the uplifting flutes and beats of the official closer “Built 2 Last” (there’s an unlisted bonus track) things are kept very cohesive throughout. Other strong contributions include PMG’s punchy “Triumvirate” and Chief Xcel’s rocking “Top Qualified” which not surprisingly features Quannum superstars Blackalicious, Lateef and Lyrics Born – this song for many will be the apex of the album.

This album is full of surprises. Inside the liner notes of the jacket are the full lyrics for the CD, which is rare enough for any rap group let alone one as lyrically ambidextrous as Haiku D’Etat. Underneath the musical presentation is an inlay tray you can flip up for a bonus DVD with interviews, live footage and music videos. While this may be a hardcore underground hip-hop group, their overall presentation is just as ambitious as a bigger name and more played mainstream artist like The Game or Busta Rhymes. With so many things going for Haiku D’Etat, it’s almost hard to find fault with this album. Worthy of high praise as it is, the very verbosity of this release is what limits it from being at that 50 Cent/Jay-Z level.

That’s as frustrating to think as it is to write as both a hip-hop fan and critic, but it’s the truth. The majority of the mainstream audience out there simply isn’t going to be able to relate to the content. You’re not going to find an abundance of champagne bottles, candy-painted cars, and fly bitches on this album. On the other hand, Haiku D’Etat are so intent on their musical and lyrival revolution they’re not even TRYING to make an album for anybody other than people just as ready for the uprising in the rap world as they are. As much as people like to dog Nelly and Will Smith for not being that profound they do make music that’s good to listen to, good to dance to, good to drive to and on OCCASION even clever or witty. These three MC’s are as clever and witty as they come, but if you can’t catch it then it might as well be written in an undecipherable alien language.

There are a few MC’s out there who can walk the line between verbally deep and artistically accessible – and it should be noted Aceyalone is one of them. Paired with Mikah 9 and Abstract Rude though, the content is a bit overpowering, like adding chili powder and cayenne pepper to a dish that already has jalapeÃ±os. Verbally it might be pushing the upper echelons, but it’s actually so much that it’s too much for most folks. If you like it really esoteric and hard to follow, Haiku D’Etat is your group – and a preponderance of dope music and nice extra features really does improve the presentation overall. It’s still not going to overthrow the mainstream though, no matter how much their name might lead you to believe it will. The album will be a revolution in it’s own genre, the niche of dope underground hip-hop, and both Aceyalone and Project Blowed fans should consider this one a must own.