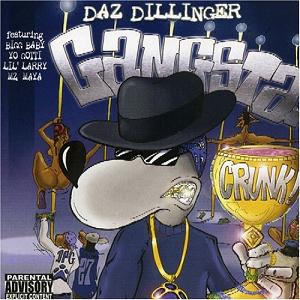 Daz Dillinger is nothing if not prolific. Since his last official release for Death Row, “Retaliation, Revenge and Get Back,” the former one-half of Tha Dogg Pound has put out no less than nine albums on his own. In fact this latest album “Gangsta Crunk” comes just four months after the release of his “Dogg Pound Gangsta LP” earlier this year. Hip-Hop hasn’t seen that kind of productivity from a major name artist since DMX released two albums back to back for Def Jam in 1998, although Daz actually has him beat on length of time between albums by at least three months.

When you own your own record label and have more or less no problem getting national distribution for your releases, you can afford to put out albums as often as you feel like. No Limit Records certainly took advantage of the pipeline during their heyday, at one point seemingly releasing an album a week or very close to that amount. Master P may have unintentionally burned out his audience in the process, and though he maintains his “baller status” it didn’t come without having to declare bankruptcy and reorganize his label. Like Master P, Daz is the biggest star on his own label, but unlike P it’s easy to see that no matter how prolific he is Daz is not releasing an album a week. For the cult audience of Daz loyalists and Dogg Pound diehards who refuse to let the G Ride run out of gas, four months between albums might be just long enough before another dose of nitro.

As you would expect all of the tracks on this 47 minute long album are produced by Daz Dillinger himself. What you might not expect is that Daz would interpolate the Eurythmics “Sweet Dreams” beat on the introductory “Penitentiary Chances” track, featuring the previously unknown Infamous Lil’ Larry. Daz doesn’t credit the interpolation in the liner notes, probably because he changed it just enough to get away with it, but he’d better hope Annie Lennox’ lawyer doesn’t come calling. The album really gets started on “Now Dat’s Gangsta,” a track that seems surprisingly light on the boom and pound one usually hears on a Daz track. The lyrics are typical Daz though through and through: “Blue khakis, blue Chucks/ Blue rag pants saggin like we don’t give a fuck.” After the flow is interrupted by a needless skit the gangsta gets a little more crunk on “We Mean Bizniz”:

“When you see that nigga Daz, best believe I mean business
357’s and glocks, in case niggaz still spittin
Only dyin no quittin, my crew fresh out of prison
How I come inside givin frog niggaz dis ribbit
Pistol-grip shotgun now grip it, big daddy get to kickin
Buck shells get to spittin, hittin you fuck niggaz”

Typically self-absorbed and entirely unapologetic, Daz is as remorseless in his lyrical flow as the movie characters he samples from and emulates in his rhymes. Daz fans already know this and accept it, largely due to a tight flow polished by a decade of experience and some of the best self-produced beats in the industry. Daz typically comes up with one or two tracks that sound like dance club anthems, despite their otherwise raunchy or incindiary lyrics. “I’m Lookin for Dat Gangsta Bitch” fits this mold perfectly:

“I need a gangsta, gangsta, gangsta
Someone strictly about her paper
Who look good, who from the hood
Who do what she should and would if she could
Smoke with a nigga, come roll it up
I like a girl in all blue Chucks
On 23’s in an all blue truck
Who bust on a nigga if he actin up”

By now you may have noticed the prevalance of “all blue” lyrics on this release. Snoop and Daz have both become increasingly obvious about their Crip affiliations over the years, and while they may not always state it outright it’s hard not to notice what they wear in videos or the dominant colors on their album artwork. This doesn’t necessarily make their music good or bad, but it does make me wonder if there are some sets in Southern California who may by now be unhappy with the fact suburbanites coast to coast are doing the Crip walk after seeing enough music videos on BET and MTV. This reviewer has never been too concerned with rappers articulating the violence of their surroundings lyrically, but there is a fine line between narrating and endorsing a G’s lifestyle and there are times when Daz seems to cross it.

Nevertheless this is the kind of Daz album you’d expect from Daz, with crass sexual odes like “Can I Bounce Dat” and his updated version of LL Cool J’s classic on “Bigg O’ Butt”; as well as odes to drinking like “Tow Up from Tha Flo’ Up” featuring Mz. Maya and warnings to rivals like “Run Up & Git Dun Up.” Daz only features a couple of guests throughout this release, but quite honestly they are not memorable even when they are credited in the tracklisting. It’s Daz’s show, Daz’s beats, and Daz’s world. The danger for Daz is that while the music in his world is still strong, the lyrics are starting to show cracks and flaws. Not everybody can be Too $hort and span a three-decade career talking about the same things album to album. Daz may turn out to be such an artist, but on this release there are times you feel as though he’s going through the motions instead of putting his heart in it. Maybe it would have been better to wait a few more months and craft an album with a little more crunk in it.