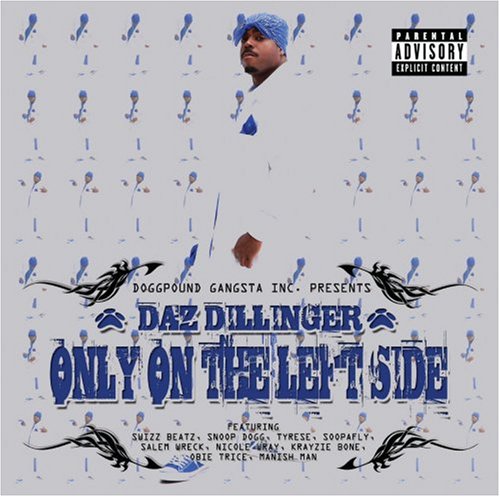 Daz Dillinger :: Only on the Left Side

The word “prolific” has been used many times to describe hip-hop artists. DMX released three albums in a little over a year between 1998 and ’99 – that was definitely prolific. Too $hort has put out almost an album a year if you average them out over his entire career – prolific like a mu’fucka. KRS-One can be called prolific if you include BDP albums in his catalogue, and there’s no doubt Snoop Dogg also fits the dictionary definition of “marked by abundant inventiveness or productivity.” Yes all of these men are prolific, but if anybody can give them a run for kingpin status as prolific’s baddest, it’s the unapologetically Crip-Hop blue dipped artist known as Daz Dillinger. His early career with Death Row didn’t indicate how busy he would be in later years, as Suge Knight and company made sure he was busy producing the label’s hits instead of putting out his own shit. It wasn’t until he truly left the fold and got “R.A.W.” that it became obvious just how much he had to say. Since 2001 a steady stream of Daz releases have hit the market. Some have been collaborations with other artists such as his fellow Dogg Pound alum Kurupt or cult favorite West coast artist JT the Bigga Figga, but however you slice it Daz has put out an average of 2 albums per year since 2001. I count no less than 15 Daz projects between ’01 and ’08 including his new album “Only on the Left Side.” An average of two albums a year isn’t just prolific, it’s INSANE. Daz is so prolific that in a race to determine most abundant rap artist he takes first, second AND third place.

There’s definitely a dichotomy of belief about the effectiveness of Daz’ strategy in the marketplace. One side would say that Daz Dillinger has almost singlehandedly held it down for gangster rap with his unrelenting slew of albums, fiercely clinging to a genre of rap many people have tried to marginalize in the post-Death Row era. While this is true, the other side can also truthfully argue that by being so prolific Daz has become very repetitive over the years. There’s only so many different ways you can say you’re busting guns, moving narcotics, throwing up your set and making an illegal living before you’ll say the same thing twice. The Daz and I.V. producer opener “Squeeze” certainly has the heavy G-Funk sound his fans have come to expect, and the lyrics are no exception to his familiar formula either:

“I get paid from drug dealin, gangbangin and killin
My pockets keep on fillin, I got hundreds to the ceiling
Strapped with a forty-fo’, pistol safe in the flo’
Have you wishin for mo’, my car bulletproof do’
You see cops hate us and we hate cops
With the one shot, they killers hangin out on the block”

It’s not a knock per se to say Daz sticks to the script, because that’s certainly worked well enough for fellow Cali phenom Too $hort over the years. Nobody is demanding Daz suddenly become a political activist or advocate for renovating blighted urban landscapes. At the same time one has to take either artist with the proverbial grain of salt, because even if it was true 15-20 years ago nobody thinks Daz is out on the street corner selling drugs today, nor is Too $hort pimping hoes on the street corners in Oakland. Those who would choose to call Daz’ genre “reality rap” should perhaps define what “real” is more clearly. Reality in this case may be an artist who talks about real things that happened in the past. That’s slightly disingenuous given Daz speaks about “get[ting] paid from drug dealin, gangbangin and killin” as though it was happening in the present tense, but let’s just let that go for now. It may be that “real” in this sense refers to what’s really going on in the streets, and Daz is attempting to portray that scenario by rapping about it in the first person. That’s an acceptable conclusion but still somewhat suspect given the “reality” is that he’s so busy producing and creating albums, let alone touring performing and promotiong said albums, that he hardly has time to stand on the street corner in Long Beach to observe and report on street life.

In the end only one conclusion makes sense when analyzing the topic matter of any prolific artist – whatever they’re really talking about has to at the end of the day be really profitable. Whether that has anything to do with “reality” per se is largely inconsequential. It may be that they really did do these things, or really do know people still doing them today, but at some point if you are successful at making music (and Daz definitely is) your reality is going to be the time you spend in the studio and on the road. It’s best to just accept the incongruity of Daz talking about gangbanging and selling drugs when he’s really gang rapping and selling albums. As long as he’s making the kind of hardcore G’d up hip-hop that can be produced “Only on the Left Side” of the U.S., he’ll do alright by fans of his genre and music. 17 tracks of this album prove there’s no reason for him change up, because he’s well enough established to pull an all-star roster of guest rappers, singers and producers. Swizz Beatz helps him be rude with an attitude on “I’m From the Hood.” Popular hyphy sensation Keak Da Sneak helps him “Drop Drop Stop Dip” on a banging piano hit. Detroit’s in the house for “My Wayz R Shady” featuring Obie Trice, Cleveland’s on the scene too for “Meal Ticket” featuring Krayzie Bone, and Daz even shows he MIGHT have a thoughtful and contemplative side on “Regretz” featuring Nicole Wray and Tyrese. Ultimately one has to split the difference on “Only on the Left Side” – Daz has been both better AND worse as a rapper, but if there’s one other thing that being prolific has brought him it’s a certain level of consistency that almost always results in an album worth purchasing. This one is no exception.

Daz Dillinger :: Only on the Left Side
7.5Overall Score
Music8
Lyrics7