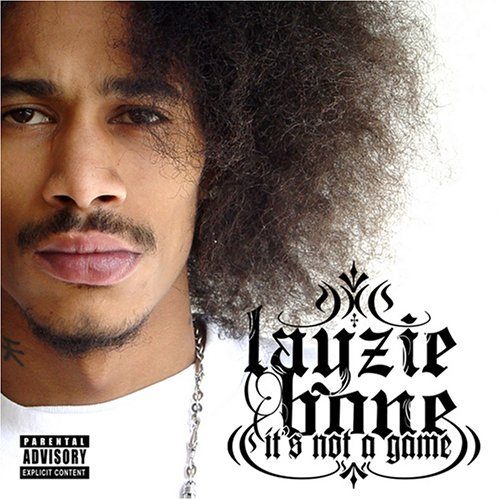 Layzie Bone :: It’s Not a Game

The Bone Thugs trainride shows no signs of stopping or slowing down. Over a decade after Eazy-E first took a chance on the unknown Cleveland thugsters and made them part of the Ruthless Records family (sadly one of the last major impacts Eric Wright would make before dying of AIDS related complications), the Bone rappers are still releasing albums in combination as well as successful solo CD’s. In fact it’s somewhat surprising that out of all the Bone members, the influential and smooth flowing Layzie Bone has only dropped one record to date – 2001’s “Thug By Nature” under the alternate moniker L-Burna.

Originally it seemed that Layzie might have been trying to move beyond his Bone Thugs origins with the name change (I for one thought so) but the Thugster was still down for the cause on “Thug World Order” in 2002 and has since been involved in many Bone projects including the “Bone Brothers” album earlier this year. While I’ll depart from writer Tom Doggett as considering Ohio part of the Midwest (that’s part of the East for those of us born and bred here) I’ll grant he was right about one thing – the Bone family consider THEMSELVES part of and kin to midwestern hip-hop. Stylistically Layzie Bone definitely has more in common with Twista than Fat Joe, and it’s not at all surprising that Layzie would duet with the former on one of the best songs on “It’s Not a Game” – that being “Midwest Invasion.” It’s fast paced but still mellow, with a beat by Stew and vocals by Layzie and Twista you can almost keep up with:

“It be that element of surprise
that got y’all niggaz lookin ’round in awe
Y’all niggaz ain’t think we get this raw
fuck what you heard and believe what you saw
The nation of thugs they ready to flip out
Who done etched-a-sketch ‘n clip out
Shoot it up, and nigga we flip out
Ready for combat on contact”

This ain’t the only dope duet on “It’s Not a Game” though. Layzie reunites with Bone family members Felecia and Krayzie on the Beat Ballers “Do Your Thang,” a smooth groove which seems guaranteed for crossover radio play. “Connectin’ the Plots” features West coast legend W.C., and if you skip a skit right afterwards you immediately find Layzie lacing game with the Outlawz on “Way Too Many.” The Ohio Players “Funky Worm” sample on the track may seem a little played but this writer will applaud Thin C. for setting the right old school theme with the beat, where L-Burna brazenly states “We run in ya crib and go in ya pockets dog/y’all niggaz ain’t ready for war/we been doin this shit since ‘Pac and Eazy/y’all better just open the door.” True dat.

Other dope tracks among the many fat songs on “It’s Not a Game” include the “sexy and thuggish” anthem “She Came Ta Party,” the dark haunting pianos of “It’s On” featuring M.T.F., “Smokin’ on Information” featuring Snoop Dogg, and “There They Go” featuring Aaron Hall among others. Krayzie Bone is the biggest Bone Thugs member to be featured on the album, but he makes the most of his appearances on songs like “Thug Nation. With almost 80 minutes of music on this album, there’s more than enough to like to go around even if occasionally Layzie drops a song that’s just average as opposed to good or excellent. “It’s Not a Game” finds Layzie picking up where “Thug By Nature” left off and improving on the formula a bit, showing he hasn’t lost momentum during his four year hiatus from solo albums. If anything Layzie continues to be the most underrated of the Bone Thugs rappers in the whole clique.