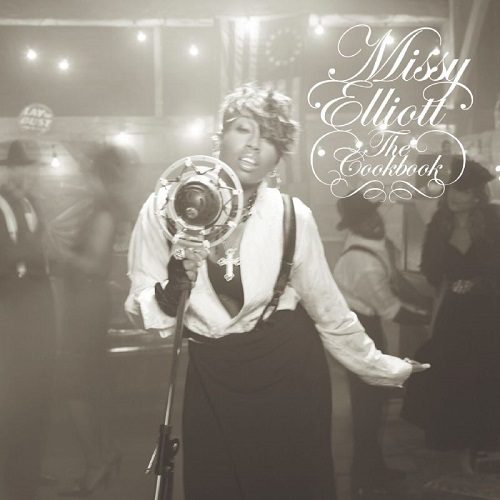 Music makes you lose control. Missy Elliott doesn’t need to tell her audience that, they already know. Typically it’s Missy Elliott’s songs that make people lose control to begin with. It’s not necessarily the lyrics that are causing this frenzy among the public. While they can be witty and clever, she’ll never be mistaken for Bahamadia or Jean Grae. When you think of Missy Elliott on the mic the words “deep” and “complex” never really come to mind. That’s aight though. Missy does what works for Missy, and sometimes keeping it simple IS more profound, as long as you’re coming correct and being true to self. The truth is that ever since 1997’s “Supa Dupa Fly” Missy has been about one and only one thing – making music that’s fun. Eevn when her rhymes are bad, they’re so bad that they’re good, because the mo’ corny they are the mo’ memorable they become. When you pair that kind of infectious fun-loving “I don’t give a fuck if you take me seriously” attitude with hot beats, the results are hard to ignore. Missy Elliott has taken every negative thing a critic ever said about her and pushed it to the side. She does HER music, and her fans love her for it, which is why when a song like “Lose Control” comes on that’s exactly what they do:

Every time Missy drops a first single off a new album it sounds like some exotic futuristic musical shit nobody’s ever done before. “Lose Control” is no exception – it’s got a big trunk rattling bass drop, a computerized repetitive note sequence that defies being called a “melody” in any way, all paired with a hand clap drum track and guest vocals by Ciara and hip-hop’s perennial hype artist Fatman Scoop. Usually these crazy tracks have Timbaland written all over them, so the biggest shocker here may be that this is Missy’s OWN production. Don’t front, you know it got you open. Even if you don’t understand whatever new type of track Missy’s trying to rock the first time you hear it, by the third or fourth listen you’ll be headnodding and foot tapping going “yeah yeah that’s the shit.” Missy does offer some more traditional style rap fare on “The Cookbook” though, which fits her theme quite nicely if you read through the menu in her liner notes. Elliott opens with “starters and sides” like the Timbaland laced “Joy” featuring Southern sensation Mike Jones. She moves to the old school for a “main course” that revamps Slick Rick’s “Lick the Balls” into a track that’s “Irresistable Delicious,” and of course features Rick the Ruler as a guest. There are other tasty selections for your meal in this part of the menu though: “My Struggles” featuring Grand Puba and Mary J. Blige (talk about your “What’s the 411” flashbacks), and the sexually explicit “Meltdown.” Halfway through the album, and we’re already into “desserts” – well Missy does have a sweet tooth. She also has a Neptunes laced banger that just goes “On & On”:

“Here I go, flip my flow
Back it up then I drop it low
It’s a must cause I’m dangerous
I’ll be a hassle on a buster, call me angel dust
I talk shit, did-ah-didn’t stutter-stutter
2005 MC’s in trouble
You run for cover hide under your covers
Cause you gone need more protection than a magnum rubber”

When you hear the chorus, you’ll wish MC Ricky D had showed up to be a guest on this track too. Missy goes for more throwback appeal over the classic “Apache” breaks on “We Run This,” enjoys the soft melody of “Remember When” and moves right into some post-dinner “liquid refreshments” with duets like “4 My Man” featuring Fantasia and “Bad Man” featuring M.I.A. and Vybez Kartel:

Faux patois doesn’t work that well for most people, but when paired with the authentic reggae rudebwoys and rocking hard over a Craig X. Brockman beat, it all makes you want to stomp your feet. In fact despite being light on the hot and spicy seasoning Timbaland usually adds to Missy’s recipe (his only other track on the album is “Partytime”) this album still has plenty of the flavor that you savor. At just over an hour long and with sixteen tracks from the opening course to the final round before somebody gets stuck with the check, you won’t leave “The Cookbook” feeling unsatisfied. While not as strong as some of her earlier albums, it does rectify the mistakes found on “This Is Not a Test” and show that far from stagnating Missy is growing as an artist both in front of and behind the mixing board. Make sure you get a taste of this.