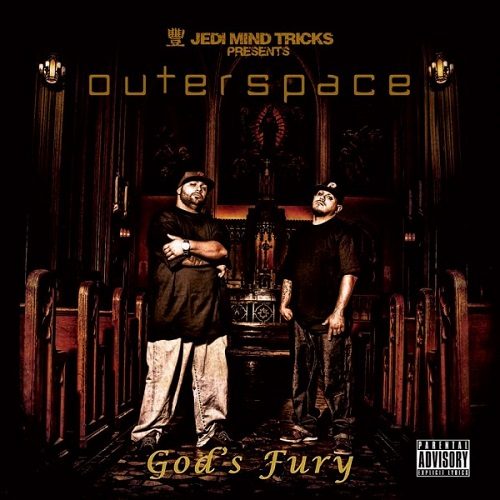 To paraphrase the living legend Slick Rick – this is another Jedi Minds Tricks presentation… Therefore, you should know the deal, and what to expect. Last year I reviewed the impressive Army of the Pharaohs album – whilst subtly castigating it. Well, this is an album that balances out my misgivings about this sub-genre of hip hop, as Outerspace effectively infuse that stable blueprint of hard gothic boom bap beats with lyrics that occasionally rise above the usual “I’m better than you/Will eat you alive” shtick. Although it takes a few listens to fully realise, this Outerspace album may not be a classic, but it is extremely good and well worth picking up.

Of course, the legions of Vinnie Paz (executive producer) fans wouldn’t have bothered waiting for anybody else’s recommendation before rushing off to pick it up, and why would they? Babygrande Records have been putting out these types of joints for a while now, and it is easy to see why their fan base is so loyal and fervent. As for Outerspace, who have definitely been here a minute, we find Planetary and Crypt, the group’s deadly duo, rocking over a slew of excellent beats – with the first two thirds of the album in particular proving quite remarkable, musically-speaking.

From the opening “Hail Mary” with its solar system synths to the crisp drum pattern of the single “What the Future Holds,” there is ne’er a dud beat to be found. We find Clockwork cooking up that typical Vinnie Paz sound on “Lost Battles” whilst the group subvert the American dream, a concept expanded by the rock solid “American Me.” The album flows so easily, and it is easy to imagine that recording “God’s Fury” must have been a piece of cake for such seasoned veterans as Outerspace â€“ but that breezy confidence is counter-balanced by an ever-present hunger to make music that matters, and this is why I feel that they trump some of the other work coming from fellow Babygrande label mates.

“Nicko” finds Crypt delivering a heart-wrenching ode to his autistic son, and it lends the whole album real pathos and emotional content – whilst also making you revisit the rest of “God’s Fury” with a new set of glasses. Soon, you’ll pick up more emotional content, not to mention decent political and social commentary – not just the usual battle music. Outerspace have made an excellent album that may just supersede anything else that Babygrande and Vinnie Paz put out this year (or next), and should help to convert even more fans to their cause. Hip hop needn’t worry too much as long as cats like this are alive and kicking, dropping fantastic albums that provide evidence of GROWTH – not just as musicians, but as human beings. That is the point of life, and the score may be identical – but I rate “God’s Fury” above last year’s AOTP effort “Ritual of Battle.” The punchlines are still there in abundance (like the wicked “I speak horse/hoarse” line on “The Last Supper”) but the LP as a whole just feels more balanced and accessible, and if you shelled out a few on this one, it surely would be a worthwhile purchase.