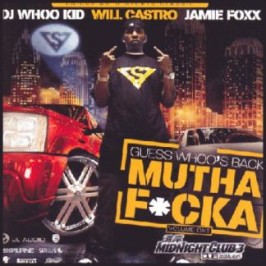 G-Unit strikes again with the latest from the Queens mixtapist DJ Whoo Kid. With new songs, clips, and freestyles from the Game, Dre, a few up-and-coming artists, and the whole rest of the Unit, this should tide most of the little guerillas over until the next big release. For the unfamiliar, Whoo Kid has been gaining momentum in the mixtape world for about five years and is now one of the leading voices of the scene. He started with the self-explanatory “beef” mixtapes, which made him a household name. Then came the celebrity hosted mixtapes that featured narrators such as Hype Williams and, in this case, Jamie Foxx. He’s also worked on tapes with artists such as 50 Cent, Common, Kanye, Jermaine Dupri, R-Kelly and Snoop Dogg.

As mentioned above, this is hosted by Jamie Foxx. While I have no idea of Foxx’s background, it’s still somewhat awkward hearing him try to keep up with the gangster pace of the record as the man behind “Ray” claims “it’s Jamie Foxx in ya mouth nigga, holla.” In this case, the awkward silence is quickly ended by a hot Dr. Dre beat for his collabo with The Game on “Where I’m From.” Yes, you’ve heard this on “The Documentary” and of all the worthy tracks on that album; this particular song is a surprising choice. Jay-Z helps Snoop on the remix tip and shows him how they “Drop It” on the East coast. The stripped-bare Neptunes beat is replaced with a damn near naked instrumental of simple drums and the occasional wavy synthesizers. Jay adds some life to the beat as he drops a gem on the Pied Piper:

“Snitch as they may, they can’t get the boy
These niggaz giving out cases like a liquor store
Runnin to the DA, trynna get me for
All the money I made I’m like forget the law
I’m not frizzayed, this Jizzay
Homey you got plizzayed, take like a man the flow ran you off the stizzage
Wastin ya time tryna sue S-Dot
Tell ya lawyer take that civil case and drop it like it’s hot”

Young Buck’s southern drawl overshadows Lloyd Banks’ lazy drool on their freestyle even though both come with some hot lines. Buck-“you stand for nothing homie, you’ll fall for anything”—Damn. Banks-“I’m hipped about heffers, that why I don’t ride without a helmet, cuz hoes will have you pissin’ out peppers.” Twista and the Speed Knot Mobstas show up with one of the highlights with “Love.” Even with the cliché sped-up soul samples, you can’t deny the Windy City vibes that the song gives off. 50 Cent drops by for “Think You Special” which is basically a sequel interrogation to “21 Questions.” The highlight of the song is actually the outro where 50 names off all the celebrities he’s met and wanted to lay.

There are a couple of decent tracks from cats who’ve only heard about platinum plaques. Pretty Ugly displays some promising skills on “Take Me With You.” The Big Mac of the rap world, Bump J, shows up twice on the mixtape, thus proving that McDonald’s gives you double the value of leading competitors. After “Move Around,” it’s hard to forgive him, but his two appearances do help add a little dimension to the child-voiced rapper. Overall, “Whoo’s Back” gets the job done. It has a little bit of everything that’s made this DJ who he is today. Whether it’s the diverse line-up of artists, the celebrity guest, or the beef track, we no longer have to guess who’s back.