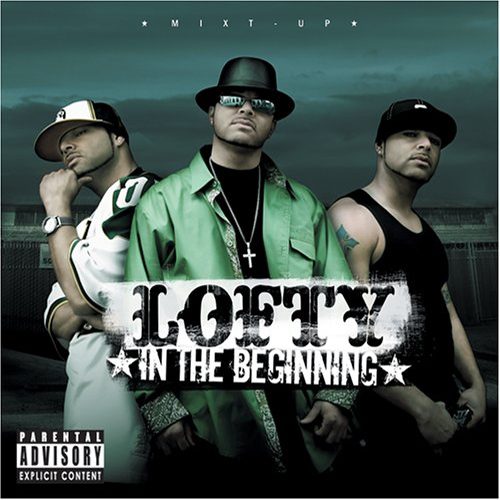 Lofty :: In the Beginning

Lofty hails out of the same school of West Coast Latino rappers that brought us Jay Tee and most notably Baby Bash. Though Bash transplanted to Houston and hooked up with the Texas sound to gain national success, Jay Tee and the rest of the Latino Velvet crew has stayed true to their roots and developed a small cult following in the process. As a long time associate of the crew, Lofty looks to cash in on the success of Bash and Jay Tee with his debut album.

Production-wise Lofty attempts to replicate the same synth-based, heavy bass approach that’s come to identify Bay area music. Most of the beats are handled by Versatyle with Lofty contributing his own effort on “Ballin Ya’ll.” One can’t really criticize Lofty too much for his horrible production on said track as most artist’s ventures into production tend to be similarly atrocious. But even Versatyle’s contributions to the album miss the mark time and time again. When Versatyle attempts composition, the synths sound too simple and fail to be catchy. Smoother attempts at production with samples end up sounding too much like everything else out to really capture anyone’s attention. The album’s only decent musical contribution comes from the highly underrated Rob-Lo on “Ride With Me.” The tracks’ smooth soulful approach isn’t Rob’s best, but still better than anything else found on “In the Beginning.”

Lyrically, Lofty fails to bring anything new or even decent to the plate. His lyrical shortcomings are further highlighted by his bland conceptual approach to the album’s songs. Lofty’s range begins and ends with stereotypical street songs and feeble radio attempts. Songs like “Ballin Ya’ll,” “Shake The Streets” and “Streets of Cali” contain the same played out lyrics found on almost every gangsta rap album and are not done well enough to warrant attention. Similarly, Lofty’s radio attempts on “Naughty Naughty,” “Ride With Me,” and “Count On Me” aren’t very good and address equally worn out topics. Lofty’s style emulates both Jay Tee and Baby Bash, but he lack’s Bash’s charisma and lyrical skill.

“In the Beginning” was an ambitious attempt by Lofty to separate from his crew and start his own career, but ultimately Lofty doesn’t have the talent to do so successfully. To his credit, Lofty is probably better than most roadies turned rappers that spawn from rap’s various entourages. But ultimately it takes more than crew affiliation to succeed, especially when the goods being peddled can be so easily found in other places. If Lofty steered away from rap’s stereotypical topics or had more personality and style he could find success, but as it is “In the Beginning” may also end up being the end to Lofty’s rap career.