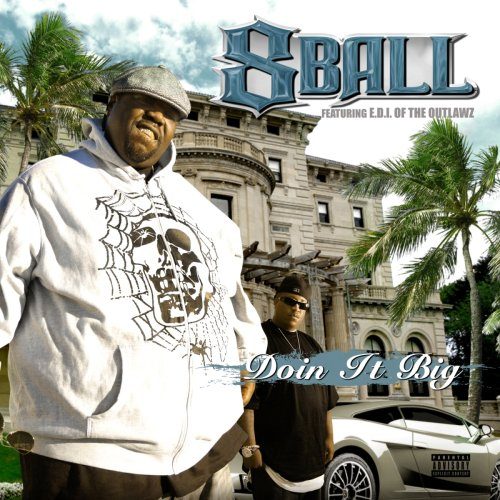 Real Talk Entertainment is back with another “super group” as they team up 8Ball and E.D.I. of the Outlawz. As has been the case since the label was sued for releasing an unauthorized Kool Keith album, this release doesn’t lack its fair share of controversy. For one, the fact that this is a collaboration with E.D.I. isn’t clear unless you place close attention to the cover. E.D.I. is in the background and his name is in noticeably smaller font. The label pulled the same stunt with another member of the Outlawz when Young Noble was featured on Lil Flip’s “All Eyez On Us.” It surprising considering the Outlawz are one of the truly respected veteran groups in the game so you’d think they would want to draw attention to them. One also has to wonder when this album came about since Eightball and MJG signed to Grand Hustle after leaving Bad Boy South. Further complicating things is the fact that MJG also dropped an album on Real Talk, this being a solo album, but that album was shortly followed by ANOTHER MJG solo released on MJG’s label. Suspicions aside, “Doin’ It Big” ends up being a solid album due to the fat pimp’s vocal presence and the in-house producers.

The main reason Real Talk has managed to outlast other similar record labels is its in-house production. Big Hollis and Preach are better than most producers â€“ independent or main stream. I’m not saying the guys are hit makers on the level of Timbaland or Dre, but they do come through with solid and versatile tracks. Despite being based on the west coast, they provide 8Ball with some funky southern bounce. “Real Music” has the soul and bass of a Three 6 Mafia track. “Super Bowl Big” has the synths and bounce of a Cash Money hit. The production duo’s imitation isn’t always flattery as they do strike out on a few songs. “Real Down Bitch” sounds like a very bad and generic version of “Project Bitch,” while “Puttin’ In Work” wastes an MJG appearance on a boring crunk track.

With the production taken care of, 8Ball seizes the opportunity to showcase his veteran mic skills. Stylistically, 8Ball has flow and lyrics down to a science, but his experience truly shines when it comes to subject matter. “It’s Music” finds him maturely reflecting on the current state of music:

“I’m like such a fucking poet I can’t help myself
So unique and original, like nobody else
Everybody seem to copy when some shit go pop
If you over eighteen doing that Soulja Boy â€“ stop
I’m not hating, I’m just saying that’s a children’s dance
I still love it cause it’s all rap music man
Evolution, everything that live and breath will change
Music is alive so it’s got to do the same
Music, if you believe can relieve your pain
If music was a drug I would shoot it in my veins
Then describe how high that shit made me feel
How the visions that it brought to life seemed so real
God put it in my heart and left it up to me
Paint a picture with my words for the world to see
It’d be explicit cause how I be living ain’t PG
They say it’s destructive, but it’s just music to me”

I have to say this track has quickly become one of my favorite Eightball solo tracks. Of course, this is part of the problem with this album since this isn’t an Eightball solo. E.D.I. is also featured on the track:

“A love-hate relationship best describes the
Relationship we had since I was a youngster
For when money became involved it became hard
And now it ain’t fun no more, the shit is just a job
How can something so pure be so dirty?
Crooked ass niggas messed it up for you and me
And ringtone rap don’t make it no better
All you need is a gimmick, you can get you some cheddar
Now I can never be mad at a nigga getting his bread
And nah I ain’t believe him when Nas said it was dead
It’s still the shit to me man, this my first love
Still get me high, but it’s the worst drug
Cause I can’t leave it alone if I wanted to
It’s putting food on the table, putting my kids through school
And you know them crackers hating it
So before they take it away appreciate it”

Don’t get me wrong, E.D.I. drops solid verses throughout and the Outlawz can mix street and conscious rap better than most, but at the end of the day Eightball is ranked higher on my emcee totem pole. For this reason, no matter how great E.D.I.’s verses are, I’m still left wanting more Eightball or MJG. Despite this minor gripe, E.D.I. definitely does not subtract from the album one bit. He sounds out of place on “Super Bowl Big” and “Real Down Bitch,” but both tracks are also amongst the worst on the album.

Overall, this is one of the better Real Talk Entertainment releases I’ve come across. Fans of either Eightball or the Outlawz could do much worse than this 10-song album. For the most part, the duo avoids played out street rap. The production is solid throughout and some of the tracks are amongst the best either man has dropped. With that said, out of the 10 full length tracks, you’ll probably skip 3-4 of them, so this might be something you pick up on a song by song basis.