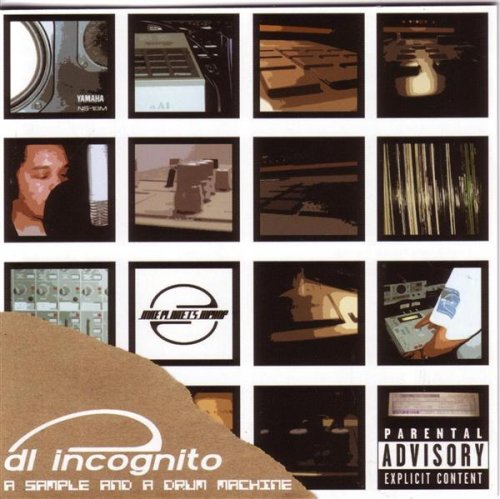 DL Incognito :: A Sample and a Drum Machine

Pablo Picasso is quoted as saying: “A painter is a man who paints what he sells. An artist, however, is a man that sells what he paints.” It’s a distinction often used to divide practitioners of an artform into those who do it for the love of the art and those who do it for the love of money. As soon as our music ascended to an artform, when Rakim declared that “rap is rhythm and poetry” and Chuck D aspired to be the “next poet supreme,” hip-hop became subject to this debate. As such, it is a welcome debate, a sign that rap music can indeed be art. But it would be foolish to blindly support the apparent good guys, those who do it for the love of it. Without the participation of business-minded people, hip-hop would never be what it is today, a great opportunity for many to realize their dreams, artistic and otherwise.

Personally I don’t buy into any attempts to divide hip-hop and therefore don’t engage in that kind of debate. Others for instance make a distinction between the terms rapper and MC. I don’t. But to play along for a minute, translated to hip-hop, Picasso’s maxim might read: “A rapper is someone who records what he sells. An MC, however, is someone who sells what he records.” Notice that they both manage to sell the fruit of their labor, with the fundamental difference that one makes music he thinks will have the most mass appeal, while the other makes highly individual music that people listen to because of its quality and originality. Taking that sales angle, it would be difficult to imagine a hip-hop version of Vincent Van Gogh, who sold but one painting while he was alive but whose body of work is now worth millions and millions. That’s not how rap music works, whose performers are deeply embedded in the here and now. You’re neither a rapper nor an MC if you can’t make yourself heard. Without an audience, no matter how small, you’re but a fool talking to yourself. Because what to onlookers often comes across as ego-tripping is really interaction, where the parties involved feed off each other.

Like it or not, in modern times sales are just that – crowd response. That doesn’t mean that today’s biggest stars will still shine the brightest ten or twenty years from now. Aftermath-affiliated artists are not that much better that they sell twice or three times more records than everybody else. They’re just better than everybody else at capturing the imagination of kids who succumb to peer pressure. These statistical outliers tend to skew our view, to a point where we think a handful of megasellers are able to define hip-hop. We should know better than that. But by the same token, can you imagine a rapper who would be happy if he sold virtually no records at all? How could he be happy if nobody estimates his work? Do you think it made Van Gogh (yup, that’s the guy who cut off his ear) any happier? Wouldn’t it be great if he had lived to see the day his self-portrait was auctioned for 65 million dollars? So I won’t knock a rapper for proclaiming he’s out to “Get Rich Or Die Tryin’,” because if he does get rich, it means people appreciate what he does, and if he dies tryin’, well at least he tried. Trying always deserves respect.

Whether you’re successful as an artist, painter, rapper, MC, whatever, there’s always more than one side to the success story. It’s like James Brown says at the beginning of “Damn Right, I Am Somebody”: “To me happiness is Fred Wesley playing his horn.” That’s the happiness of Fred Wesley as he plays his horn, and the happiness he evokes in those who hear him play his horn. There’s the fulfillment that comes from expressing yourself, and there’s the fulfillment you feel when others show interest in what you express. See how it’s all tied together? Could it be that rap can easily bridge those oft-discussed gaps between art and entertainment, between major and independent, between underground and mainstream, between rapper and MC? It should seem that hip-hop, with all the artistic and commerical growth it experienced, has also matured since the rift first appeared at the dawn of the 1990s. Maybe the key players art and money haven’t grown apart but found a symbiosis. The clichÃ©d starving artist and the filthy-rich entertainer slash entrepreneur do exist, but they don’t sufficiently characterize hip-hop today. Not everybody gets rich, but many manage to make a living. Not everybody reaches the artistic apex, but many put out quality material.

Take Canadian rapper DL Incognito, whose second LP “Life’s a Collection of Experiences” was nominated for a Juno Award. Which means he must have been on the right track with his 2002 debut “A Sample and a Drum Machine.” Running his own label with his brother, we’re likely dealing with someone who realizes that hip-hop is both an art and a business. From jump, DL introduces himself as a passionate rapper and producer. “I spend most of my time with the beats / I’m really hard to reach / In the studio my time is increased,” he offers on “Cool, Calm & Relaxed.” A voice constantly raised above conversation level and a brash demeanor soon make it evident that DL is a competitive guy who strives for more:

“I might be greatest in the future
Nigga, don’t be a loser, fuckin’ buy my shit now
It’s an underground classic you want in your collection
Hip-hop’s been dead for years, witness the resurrection”

If he continued in the same tone, DL Incognito would be another delusional rapper unable to realistically assess his situation. But as it progresses, the album gains stature. On the superb “What Dreams Are Made Of” DL still waves that IOU check hip-hop handed to him, and the amount of trains, planes and automobiles he lists might be asking for too much, but the song’s real message is that doing it for the love of the art and doing it for the love of money are not mutually exclusive:

“I raid crates, got 20 Zips of beats made
I’ve paid my dues, now I’m waitin’ for change
Waitin’ for planes, waitin’ for the 4.6 Range
Outside of my league? You must be ill in the brain”

While its title puts a clear emphasis on production, “A Sample and a Drum Machine” pays equal attention to the vocals. On no other song do DL Incognito the producer and the rapper coalesce as well as on “Audio Coke,” a combo of quite literally dope beats and rhymes:

“My shit sells, tell your folks, nigga, I’m no joke
My lines make your ears bleed, I’m audio coke
I’m audio blow, absorb this through your earlobes
A natural high, this is pumped all over the globe
It’s worth more than gold
Got pushers on every corner
I take control of these so-called streets
My whole network is underground, kept underneath
The black market sell my rhymes and my beats
Now weak niggas OD off my music
If I told you once I told you twice not to abuse it
I bake, niggas lose it, they fiend for mine
Your heart start racin’ like the deep bassline
They say I committed a crime by comin’ on in
like heroin, in a syringe; a friend to a friend
A testament that the war on drugs just ain’t workin'”

Guests Techtwelve and DJ Grouch shine on “Rugged Raw,” a slice of underground hip-hop with musical finesse, where Grouch’s cuts harmonize well with Tech’s sly trumpet sample, while DL solidifies his position as a surprisingly comfortable and confident rapper. Other highlights include the bilingual collaboration with labelmate Mic Check, a forceful combination of piano loops and heavy drums entitled “Savoir Faire,” the anthemic “Universal Love,” which seems suited for live performances, and the Techtwelve-produced “Spit Forever,” which breathes new life into an oft-used sample by way of clever chopping. Too bad the sequel, “Spit Forever 2,” pales in comparison with its stiff drums and lofty keyboard stabs. Is this the same guy who made his entrance boasting: “A sample and a drum machine is all that is needed / your keyboard is defeated”?

Like many debut albums that incorporate earlier material, “A Sample and a Drum Machine” isn’t as cohesive as it could be. The use of the n-word is slightly excessive, there are very Primo-influenced scratched hooks, weak drums play tag with strong drums, insightful lyrics get replaced by lyrics whose only object is to rhyme, etc. Ambitious songs like the pensive “There’s Something…” or the wistful “Anticipation” – as good as they are – lack the finishing touches that transform something good into something perfect. But through it all, DL Incognito’s young, clear voice speaks of ambition and determination, two elements that are always liable to take a rapper and an album to the next level:

“I started from the bottom, made my way to the top
My art is modern for the moment, so in time I get props
It’s like a painting by Picasso, graffiti on the block, though
I’m soon to be followed like the twelve apostles
I’m dope like Rasco, but this is ‘how the north was won’
With no guns, just with snares, hats and drums”