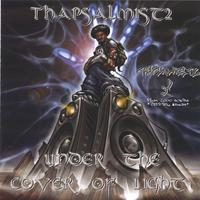 ThaPsalmist2 :: Under the Cover of Light

I feel as though I need to grade this album like an essay. Partially because ThaPsalmist2 is a college student and makes lyrical reference to his education, partially because “Under the Cover of Light” attempts to teach the listener something, and partially to prove a point: an essay needs a thesis, a gravitational center that unites and justifies the assertions made within. So does a quality hip-hop album. Near as I can tell, the thesis here is something along the following lines: “I’m here to teach you something about truth. Here, listen, to my truth. Isn’t that truthful and real? Also, please believe in God and Jesus.”

If you didn’t notice any actual assertion there, don’t worry. There wasn’t any. And there’s none on “Under the Cover of Light,” an album sporting some fine beats and flows, but mostly hollow declarations not backed up by any insight. Maybe I wouldn’t be so harsh if ThaPsalmist2 (who really needs to drop the awkward 2) wasn’t so goddamn insistent about his wisdom. Every track is an exhortation for other rappers to wake up, lamenting things like “Why intelligence, they refuse to elevate?” “Dare I call it art?” our narrator asks about “other” hip-hop on “Incoherent Babble.” The reason I put “other” in quotes is because, near as I can tell, ThaPsalmist2 is repulsed by anything “secular”.

He’s a devout Christian, you see, and he hopes we are too. That maybe wouldn’t be such a problem if his rhymes were original, his ideas well thought out and polished, and his beats above average. But ThaPsalmist2 falls into the same trap a lot of non-religious rappers do: he yells things at us without proving them first. On the flip side, he asks questions without attempting to answer them. Take the one-two-punch of “Manifest Revelations” and “Who Am I” as an example. On the latter, he asks, “What is worth but a subjective value placed on one subjectively?” On the former, it’s “What is life’s worth?” And despite the overuse of big words and large concepts, not once are these ideas delved into with any real insight. This is an album lacking almost totally in any wisdom, and that’s made worse by the pigheaded insistence on briefly visiting ideas that actually do warrant further lyrical study. It’s very frustrating, and it makes me want a Jack and Coke. So, props to ThaPsalmist2, for succeeding where Iconz’ “Get Fucked Up” failed.

In the way he structures his flows and places his words, ThaPsalmist2 is reminiscent of Nas: very few direct and easily spotted rhymes are used, in favor of longer sentences punctuated by occasional rhyme schemes. That’s a tough style to pull off, since it’s easy to sound long-winded and hard to grab the listener with complex wordplay, as ThaPsalmist2 proves. Nowhere on “Under the Cover of Light” is there a clever metaphor that impresses, a moment of true rhyming inspiration, even an impressive “compound syllable sound,” as Eminem refers to the wordy style of rap. Actually, speaking of worthy metaphors, I was lamenting their dearth while first listening to this album when, midway through, the song “Meiosis/Mitosis” pops up. Be careful what you wish for: an analogy is drawn between the biological process of meiosis, and rap music. What do the two have to do with each other? I have no fucking clue, and neither does ThaPsalmist2. Something about “splitting the cell,” perhaps? Whatever. Bartender, is my Jack and Coke ready yet?

Okay, that’s a little mean. But using the example of Nas, let me illustrate the difference between actual intelligent rap, and whatever this is. Remember Nas’s “I Can”? The one with the singing kids? Nas wrote that to teach African-American children about the glorious history of their race. He used examples, wit, rhyming skills, and a catchy beat to expand on this very important theme, and the result was a definite high point for hip-hop. Nas is smart, yo, and he doesn’t need to yell passages from biology textbooks to prove it.

ThaPsalmist2, on the other hand, wants to seem smart without putting in the work. He can rap all he wants about the “proletariat” and the “bourgeois” (as he does on the appropriately named “Incoherent Babble”), but until he has something to say, he’s not saying anything at all. On “This Is Not a Test,” we are “reminded” that “the Bible was originally lived, not written.” Well, that’s certainly debatable. Might want to back that up with some examples of the positive nature of faith. But no, all we get is a reference to Mel Gibson’s “The Passion of the Christ.” Oh, give me a break. You really want to go there, ThaPsalmist2? It’s lines like that that make this album almost exclusively directed toward Christians. Specifically, Christians without discerning taste in rap music.

Let’s talk about the beats, which range from, “Hey, that’s pretty good,” to, “Oh, man. Where is the bartender with that Jack and Coke?” The self-produced “Who Am I” scores with a minimal piano and hard-hitting drum machine. And despite the lyrical shallowness, ThaPsalmist2 flows nicely here, showing that he does indeed posses talent he’s unwilling to harness. The whimsical “Proclamation” stays catchy and fun, and even mounts the lyrical challenge of constructing whole flows with alliteration brought to you by the letters “P” and “C.” (“Perfectly practicing profitable precepts presented in Proverbsâ€¦”) Alas, those are the exceptions. Most beats are criminally lacking in any sort of catchiness or originality. They’re for the most part serviceable, but you can get serviceable beats from a Casio keyboard. I’ll say, though, that the strongest tracks are produced by ThaPsalmist2 himself. Maybe he can build up a career behind the boards.

All in all, this is a weak effort that strongly wants to be a dialogue on truth, faith, and something called “divine knowledge.” It’s, you know, not that at all, but that’s what it wants to be. Here is some free advice for ThaPsalmist2, courtesy of a fellow college student who writes his share of both raps and essays: start with a one sentence summary of what you want to say, and go from there. “Under the Cover of Light” isn’t as bad as, say, a Charli Baltimore album, but it’s incredibly hollow and insultingly self-assured. Maybe you’re smarter than us, ThaPsalmist2. But you’ve got to prove it, and big words aren’t cutting it.

Okay, can I have my Jack and Coke now? Jesus.

ThaPsalmist2 :: Under the Cover of Light
4.5Disappointing
Music4.5
Lyrics4.5