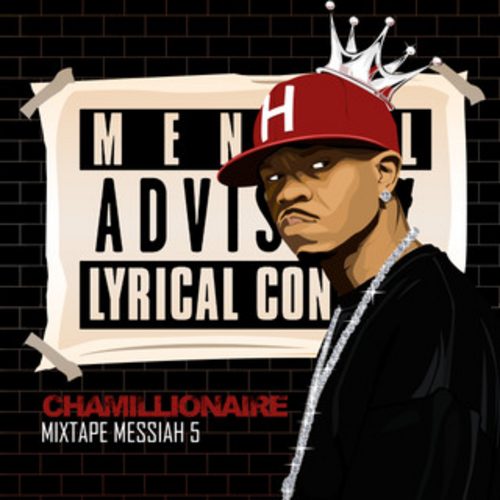 Chamillionaire is the type of rapper who rolls with the punches. He originally planned to drop his highly anticipated album “Venom” in the 4th quarter of 2008. For whatever reason, “Venom” had been pushed back until 2009 but that didn’t stop Cham from supplying his fans with more music. After the hefty two disk offering that was “Mixtape Messiah 4” Chamillionaire hits us up with one disk of freestyles and jams on “Mixtape Messiah 5.” Inside he advertises a free “Mixtape Messiah 6” dropping soon, but as of this writing MM6 will be dropping on January 13th and will NOT be free. I’ll save the bait and switch complaining for when I review that mixtape. This mixtape is much like the rest of the Mixtape Messiah series, meaning that even as a mixtape you won’t be mad you paid full retail price for it. Cham tackles 22 tracks, minus a few skits, with his usual lyrical skill. Freestyles over popular beats dominate, but don’t detract from the overall quality of MM5. Famous, Cham’s current protÃ©gÃ©, gets a lot of time to shine on this one as was the case on MM4 and even though he can’t touch King Koopa, he holds it down as a worthy koopa.

Highlights abound on MM5 when it comes to Cham flipping current popular tracks with his own twist. The originator of lyrical baller rap should have definitely been invited to the party that was “Swagger Like Us” but instead Cham has to remake the track and drops lines like “Got a major deal, went and bought some green diamonds, why’d you waste your scrill? I buy a green diamond it’s a baseball field.” “Bust My Windows” finds Chamillionaire teaming up with Chalie Boy in a classic response record calling out both males and females who partake in the childish practice. “Live Your Life” revisits another TI track from his “Paper Trail” LP (a testament to the dopeness of that CD!) declaring “it’s Texas for life.” Though Cham wrecks all the freestyles/remixes with his own twist and his own hooks, it is the less popular tracks where Cham shines the most. “Air Forces” puts Jeezy’s version to shame as Cham samples some classic Pimp C words of wisdom and drops a stellar verse:

“Independent as ever, Texas was at the top
Destiny trying to stop us, expecting Texas to flop
So we pull out the drops, let the trunk on it pop
Reminisce how we lost almost every legend we got
CEO of myself just like J is to Rap-A-Lot
Face and the Geto Boys will always be big as Pac
Jay is my favorite rapper and Roc-A-Fella was hot
But we gon’ throw up that H before we ever throw up that Roc
Family chasing the dollar, Chad he got a daughter
Legacy with her mama, plus he got a Shenara
Hawk, he had a wife so I picked up the phone and called her
God don’t handle that and the blessing will be to calm her
Who would have known that after the arguments we would ball
Got into it with Paul, started it as my dog
Divided is how we stand, united is how we fall
Pimp knocked down the door and then told me we had it wrong”

“Creepin Break” is another track Texas rap fans will want to peep as Cham doesn’t rap, but talks about a lot of issues he’s gone through in the last few months, including his issues with Yung Ro. “Hi Haters” is another track where Cham puts his own spin on an old topic as he, in my opinion, drops a better version of the concept Maino dropped earlier this year. The beat and hook are different, but the “Hi Hater” concept is done better here. Cham also does a similar remake with “Comfortable” where he flips a track with a similar concept, but different beat and hook, as T-Pain’s “Chopped and Screwed.”

Overall, there’s not much to complain about on “Mixtape Messiah 5.” While blatant beat jacking is the main complaint fans have of mixtapes, it’s hard to lodge that gripe against Chamillionaire as even when he beat jacks he adds his own concept and hook into the mix. I can honestly say the Cham version of some songs are better than some of the original songs. He even gets more original by flipping beats with entirely different concepts than they were originally intended. Famous also finally gets my attention with “All I Got is Pain” where a dope Cham hook helps his heartfelt rhymes hit home. Longtime Cham fans will need no motivation to buy this, but even those waiting for “Venom” wouldn’t be remiss if they tuned in to the MM series.